Once in a lifetime? (sh-t just got real)

Whatever it takes (redux)

It's no surprise that the Federal Reserve and the ECB will evidently do everything within their power to pump prime financial and stock markets, and US futures are now blazing towards limit up for the now-traditional surge to into the weekend.

The Fed plans to inject another $1.5 trillion into the system by the end of the week, and beneath the surface there have been some unusual and worrying flows.

Having crashed -8 per cent in early trade to be -32 per cent off their highs, the Aussie market closed up +4.4 per cent on the day, with a thrilling and face-ripping rally into the close.

Such an intraday swing of more than 12 per cent is truly unprecedented stuff, with local stock markets behaving more like a cryptocurrency casino than a rational mechanism.

ASX futures are up another +15 per cent tonight, strapping on the after-burners and pointing to more gains on Monday. 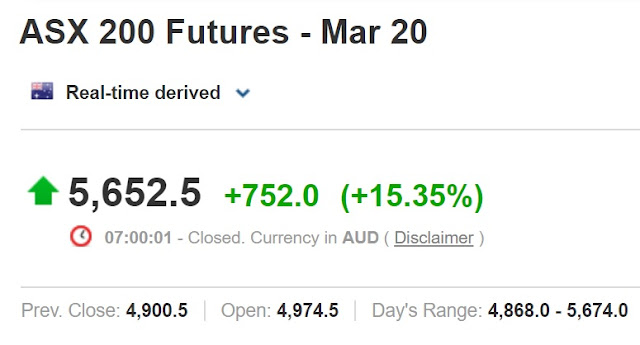 Aussie futures have swung across an outlandish 25 per cent range within 24 hours.

Chalk one up for efficient markets!

A wild move, and seemingly illogical, given what's coming down the pipe for Australia's economy, but that's short-term market moves for you.

Daily market commentary, while an endlessly fascinating pastime during this global pandemic, has little to do with rational, considered, and sensible long-term market investment decisions, of course.

Partly for personal reasons my main market of interest is presently the UK FTSE, where the market has also stumbled from 7,700 to 5,300 in double-quick time.

For reference, during the depths of Britain's desperation during the global financial recession in 2009, the FTSE 100 temporarily plunged to under 4,000.

The UK CAPE ratio is already relatively cheap following the Brexit maelstrom, and has been getting cheaper by the day, so when the recovery finally falls due the expected 10-20 year returns potentially look set to be seriously strong.

This is not advice, so please DYOR. 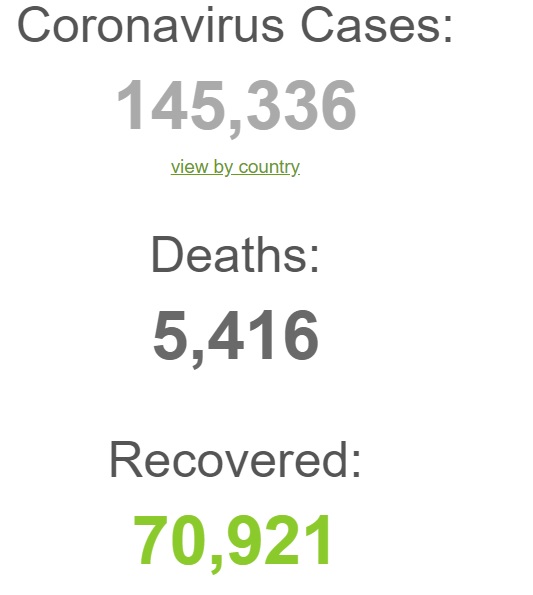 The number of virus cases has increased by another 11,000 or so since I went to bed last night.

Until it's clear that new cases of and deaths from the coronavirus are under control, a US recession (and probably an Aussie recession) seem all but inevitable.

At least, everyone thought so until yesterday.

Today, markets appear to have adopted a different view, but the US has barely even begun testing for the coronavirus, so it's impossible to know the extent of the issue.

Edit: President Trump has now declared a national state of emergency, more testing kits to be rolled out forthwith.

Unfortunately an under control situation doesn't seem to be anywhere near where we're at yet, with total new cases globally still increasing exponentially (which is what you might expect for such a contagious virus). 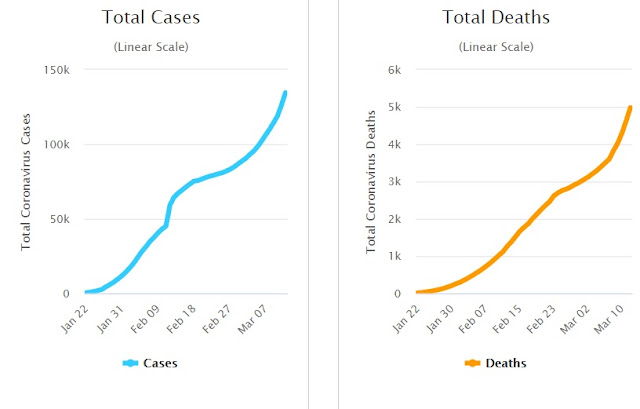 China purportedly has gotten new cases under control, although it practically had to shutter its economy to achieve this.

But now cases of the virus have moved into Europe, Korea, Iran, the US, and elsewhere, including Australia.

When updated for today's numbers the below chart will take another leap (the spike on February 12 was a classification issue - today's figure will be a fresh high). 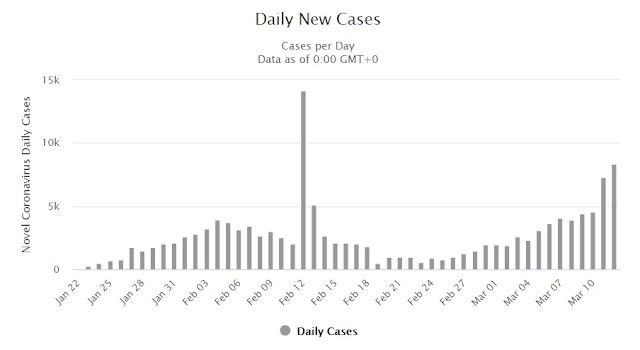 Ex-China, there's been no let up in the total number of cases, and a key concern must be that if cases spread to countries with poor hygiene and a lack of healthcare, things could blow up catastrophically. 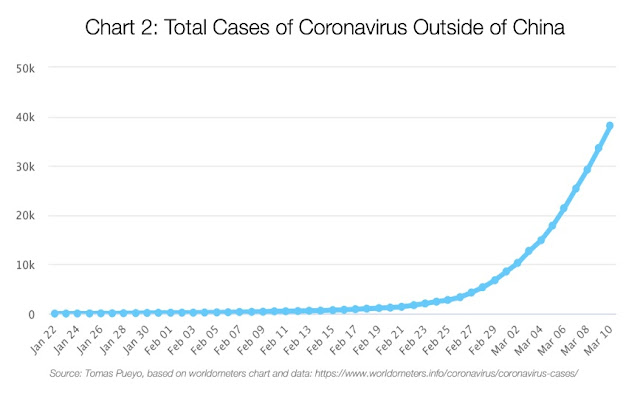 Some of the reported mortality rates are terrifying, but I'm not qualified to say whether such numbers are reliable (most likely they're overstated, for hopefully obvious reasons).

The good news is that it seems that social distancing does appear to be effective.

The bad news is that to get matters under control some entire economies, such as Italy, have needed to be shut down. 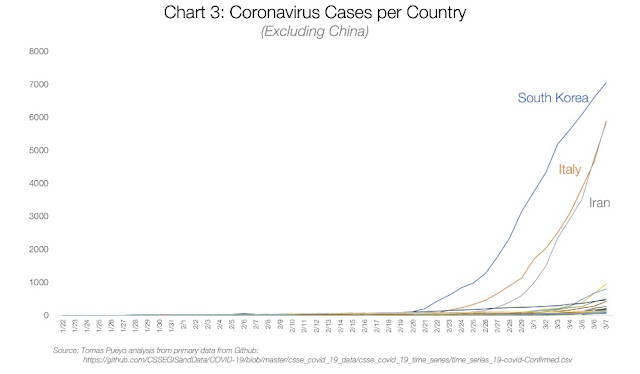 Here's the zoomed in chart for countries other than China, Korea, Italy, and Iran. 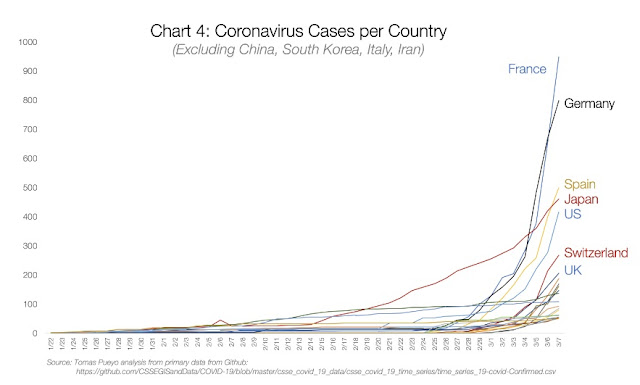 Prime Minister Morrison has suggested that from Monday social gatherings of 500 or more should be cancelled.

Already being canned were some business conferences, sporting events, live musical and stage performances, tourism and work flights, hotel stays, and goodness knows what else.

On a personal and immediately more problematic note, The Wiggles have cancelled their March gig, while the Melbourne Grand Prix has also been binned.

With a couple of hundred confirmed cases of the virus in Australia, now including Home Affairs Minister Peter Dutton today, stuff is suddenly getting real.

Anyone with an Excel spreadsheet can calculate that in Australia we're possibly only about 2-3 weeks from going into lockdown if the spread is not arrested immediately.

People more vindictive than I have pointed out that Dutton at least has experience of quarantine, but truthfully this issue is no joking matter (actually, they probably weren't joking - social media is a dark place).

There's been a fair amount of speculation as to which state leaders and members of the cabinet Dutton has met with recently.

Travel agencies have been shutting branches, and some airlines have suspended certain flights, including Qantas.

Airline and cruise ship insolvencies could be the tip of the iceberg if a shutdown of the economy eventuates. 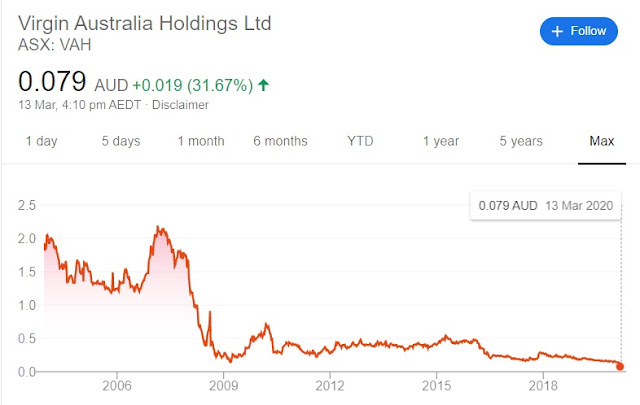 So, yes, there was a huge bear market rally today.

But in an environment where stocks can crash by -32 per cent in only three weeks, I don't believe it's any exaggeration to say we could yet face the biggest stock market meltdown since the global financial crisis if the coronavirus isn't contained over the next few months.

At the moment the virus has been an issue just for a short while, but it could yet drag on for many more weeks, or even months.

Hence, I'm content to be benched onto the market sidelines.

Now, on that sobering note, here's the good news.

As and when the virus does pass, we'll go into the next bull market with a much lower Aussie dollar, the lowest interest rates in living memory, an economy wash with 'new money' from government stimulus, stimulatory Budget settings, and heightened government involvement in the economy.

So if the worst does happen for stock markets, the ensuing upside could also be the buying opportunity of a lifetime.

Treasurer Frydenberg has called for an emergency meeting with the Reserve Bank today, according to the Australian Financial Review, which may yet mean that interest rates are cut even sooner than expected.

Frydenberg has reportedly also discussed whether a short selling ban with ASIC, although none has been implemented.

Wayne Swan introduced one during the financial crisis, when stock markets crashed.