Around the world in 80 loosely assembled thoughts

All around the world

There's so much going on in the world that one's brain may explode this week.

Virtually in bullet point format, here are a few loosely assembled thoughts, broken up for ease by  the geography of the globe.

When the Fed's Bullard reported that the US jobless rate could rise from the lowest level since the 1960s to 30 per cent by next quarter, this was a crystal clear signal that we should expect a money-printing bonanza on a previously unfathomable scale.

Given that we're now promised open-ended QE, it's impossible to put a figure on the dollar value of the combined stimulus, but 'somewhere in the trillions' might be a reasonable place to start.

Where will all the money come from?

It's worth thinking back to Bernanke's 60 Minutes interview from some years ago:

-is that tax money that the Fed is spending?

-it's not tax money. We simply use the computer to mark up the size of the account....

Maybe the world's gold bugs were always on to something!

I read the Federal Reserve's latest release last night before bed and quickly got lost in a maze of acronyms and other shorthand for new stimulus programs.

The gist of seemed to be that open-ended QE will continue ad infinitum, with the Fed to purchase anything from corporate bonds to investment grade securities, both in the secondary markets and through ETFs.

And more or less everything is to be backstopped, with the Fed apparently taking all of the risk out of banking and lending, in a bid to keep credit flowing through the economy.

The Fed will also 'provide liquidity' (the new term for bailout) to Main Street, though I'm not across any of the details on that point.

These are crazy times.

US stock markets continued to fall regardless by another -3 per cent.

The S&P 500 is down -34 per cent in just over a month, and the Dow Jones is faring even worse through March, but stocks and the CAPE ratio still remain far too expensive given the outlook and likely deterioration in earnings.

Prime Minister Boris Johnson summoned the Churchillian spirit in calling for Brits to pull together through the coronavirus crisis.

Rail franchises have been suspended, and Brits overseas have been warned to return home immediately lest there are no commercial flights available (Singapore is closed anyway, making such a move rather tricky for many).

The UK public has been advised to stay at home, and non-essential businesses have been shuttered.

Police may enforce the advice to stay at home with fines, so it appears to be a virtual lockdown scenario.

The FTSE 100 is beginning to look interesting and relatively cheap, having crashed by about -40 per cent from above 7,700 to 4,993 in double-quick time, and with yields gradually becoming more and more attractive (not advice).

Europe (Germany flattens the curve, Italy may be improving)

Germany appears to have successfully flattened the curve of total cases, with new cases now also falling over the past few days since March 20. 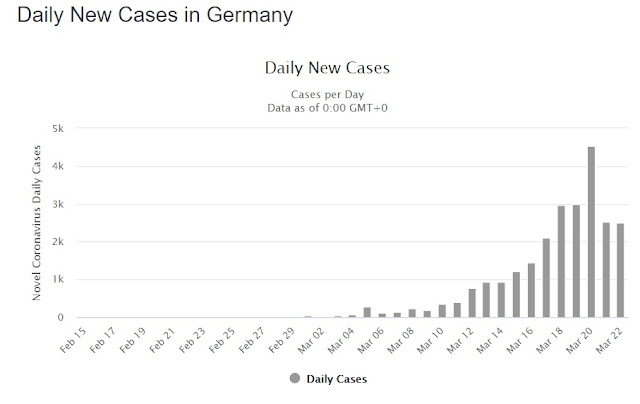 Germany has had 123 deaths to date, which in the context of some of the more extreme predictions is remarkably good result, at least so far.

Italy has been the most heavily impacted country outside China, now with more than 6,000 deaths, but is also tentatively reporting consecutive daily improvements in the increase of new cases.

Italy saw another 8 per cent increase in cases yesterday to about 64,000, but this was the lowest percentage increase since February 21.

This is the first really positive news in some time, in some respects, and it gives me some hope that we'll eventually see the virus out the back door and get back to business (though it may not be business as usual).

My old man reminded me by email from his self-imposed isolation of an old saying that Chinese civilisation has been around for 5,000 years, so they can afford to be patient.

Whether by design or by accident, China will surely ascend to become the world's greatest economic powerhouse as the US flounders into a dire recession.

Meanwhile, western nations are left to consider the wisdom of outsourcing the cheap production of everything from facemasks to respirators - and indeed everything else - while racking up seemingly endless government debt and deficits.

Wuhan has effectively stopped new cases of the coronavirus in their tracks, and China's factories are quietly rumbling back to life, while years of surplus put China in a powerful position to tip in trillions of dollars of infrastructure programs and other stimulus should they be desired or required.

This can ultimately be a positive for resources-rich Australia, now too with a much lower Aussie dollar boosting our export revenues, though the boost may not be as timely as we'd like it to be.

With Australia effectively shutting down for a while, we're about to discover how a consumer-driven economy fares without consumers over the coming few weeks.

Aussie deaths from the coronavirus remain low, at just 8, and for whatever reason it seems likely at this point that we can successfully flatten the curve if we follow the rigorous testing and quarantine measures deployed elsewhere, while keeping the borders closed or closely monitored.

There will be printing here, too, in the form of bond purchases, though they'd probably prefer you called it 'unconventional measures' or 'yield curve control', or anything other than money printing.

But the big question is what the government will now do for the all the businesses which now must shut up shop, and their employees.

Bailouts for businesses are one option.

Loans are another option, but potentially a messy one.

Welfare support for stood down workers will be essential.

Some forecasters now think that Aussie unemployment could rise from about 5 per cent to as high as 10-15 per cent, so the next round of stimulus will need to be big and bold, and focus on putting cash into the hands of households immediately.

There's light at the end of the coronavirus tunnel, and there'll be plenty of time for asking questions on the details later.

But whatever the deal is, it needs to be big and quick. 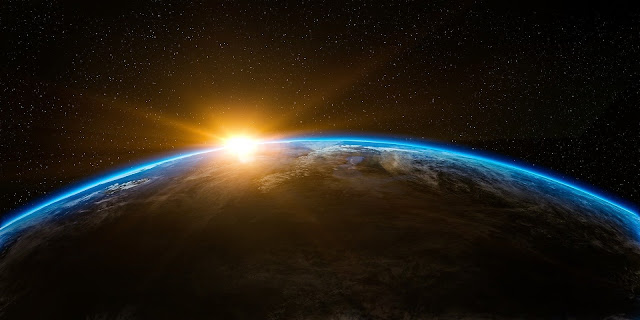