The Prime Minister just announced the third stimulus package, being an unprecedented $130 billion in JobKeeper payments.

$1,500 per fortnight is about 70 per cent of the median Aussie wage, and the payments can apply to full time, part time, and casual workers with at least one year in their job, as well as sold traders with no employees.

Last week the JobSeeker payment (formerly Newstart) was also doubled to $1,100 per fortnight.

Businesses with a turnover dropping 30 per cent since March 1 (or 50 per cent for business with a $1 billion plus turnover) will be eligible for the subsidy.

This is tremendous news for workers in the gig economy and other recently stood down workers.

6 million Aussies are expected to be eligible for the payments.

This could result in shorter-term cashflow challenges for some businesses, but it's a huge move, and a very positive one.

Interestingly this could actually result in a payrise for some casual workers, especially many of those in retail and hospitality (where the bulk of stood down workers presumably lie).

And this will make marked difference to the feared huge spike in the unemployment rate, so the Morrison government deserves credit for that, even if the details of the bill do prove to be a little rough around the edges.

Obviously, you can't be classified as unemployed if you're still receiving pay from a business.

Moody's sounded remarkably chilled about the AAA-rating, and markets seemingly liked this news a lot.

The Aussie 10-year yield moved up a little.

Another positive development today was the lower reporting of new cases of COVID-19.

It looks like things are on track for another materially lower figure today, with a total of 266 new cases.

This is well down from 459 two days earlier, and the lowest daily result since nine days ago on March 21.

Whether this is actually due to positive behavioural changes or it's just an anomaly remains to be seen, but long may these improvements continue. 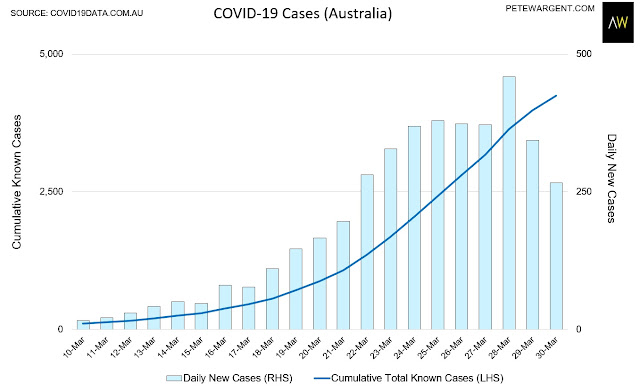 State governments are not holding back here, however, continuing to incrementally tighten measures to restrict travel and social gatherings.

The Aussie ASX 200 fairly ripped into the close - and into during the closing share price auction - on Morrison's announcement to be up by an enormous +7.00 per cent today.

This was the biggest daily increase on record for an ASX, and by a massive 1.22ppts margin (h/t @Scutty): 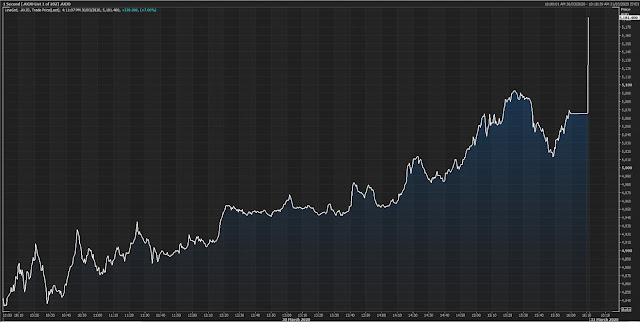 It's not a surprise that the fastest bear market will see some of the biggest daily rallies, but even so this was a ripsnorter.

Australia needs to build a bridge to the 'other side' of COVID-19, and today was a promising first, ah, pylon.

Kudos to Morrison and Frydenberg for delivering the goods. 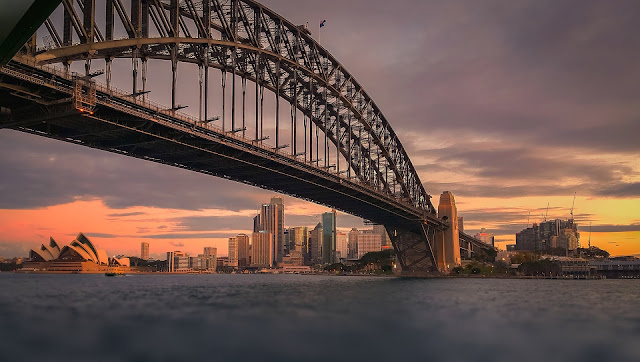