Wages bump along along the bottom

There's been plenty of talk of wages growth in Australia picking up the pace again as the labour market improves.

But with plenty of underemployment and spare capacity around, there's barely a flicker of that yet. 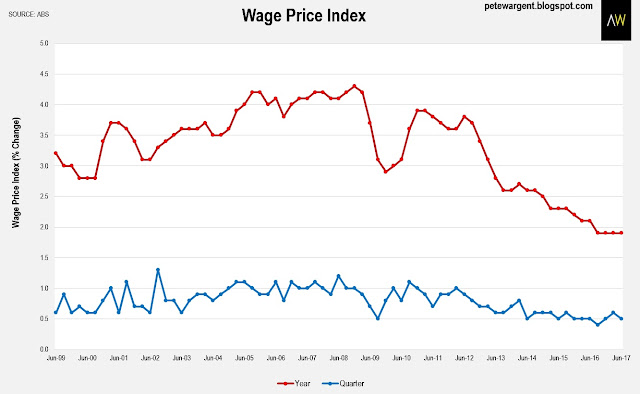 For all the hand-wringing about record low wages growth and so on, it's worth noting that wages have comfortably outpaced inflation over the past decade.

Wages growth is still ahead of underlying inflation even now, if only just.

Not so widely reported was that public and private sector wages growth including bonuses increased by +0.7 per cent in the quarter - the strongest result for the June quarter since 2010 - to be +2.1 per cent higher over the year.

Furthermore, the numbers of hours worked in the economy has been rising solidly over the past 12 months, even if growth in the hourly rates of pay has been subdued.

Public sector wages growth has been surprisingly robust in rising by +2.39 per cent over the financial year.

But private sector wages growth really has been in the doldrums, increasing by only +1.78 per cent.

You can see here how private sector wages growth has tailed off since the peak of the resources boom. 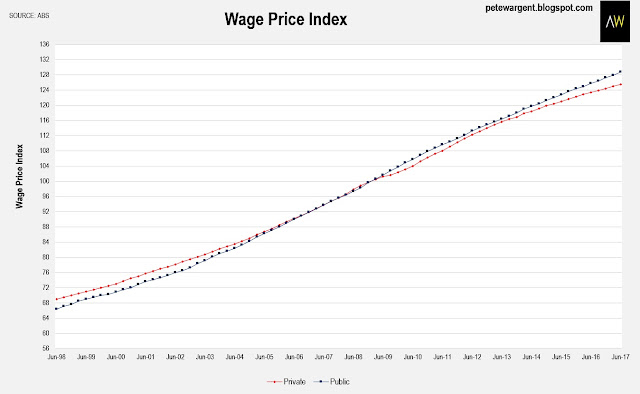 The unemployment rate in New South Wales has fallen to just 4.8 per cent - across Greater Sydney it is now below 4.4 per cent - yet to date there are still few signs yet of wages growth really picking up.

Indeed, annual wages growth around the traps was remarkably similar across the states and territories, tracking in a range of +1.9 to +2.1 per cent, with Western Australia the sole laggard at +1.4 per cent. 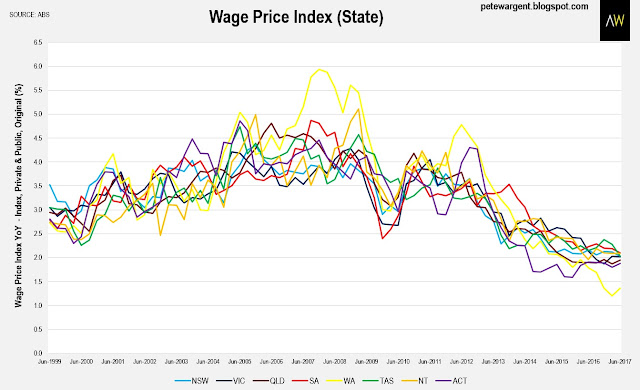 Although lower nominal wages growth is seen as a 'bad thing', it is also a mechanism which helps the labour market to adjust through weaker periods.

Contrary to what you might think, across the past two decades the strongest percentage growth in wage prices has been seen in Western Australia, then South Australia, and then the Northern Territory (although there are of course wide variations within the states). 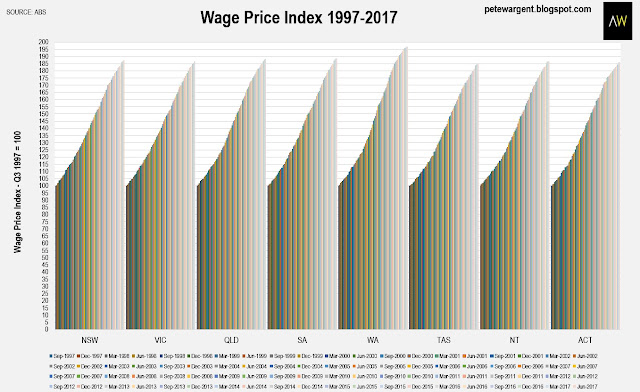 There was a strong +0.8 per cent quarterly pick up in mining wages in the second quarter, with many workers apparently being awarded their first significant pay rise in a couple of years or so, but in annual terms mining wages have still been limping along at +1.1 per cent.

Wages growth in rentals, hiring, and real estate has also been very subdued, reflective of the notable evidence of new entrants to the industry.

Over the financial year the top performing sector was healthcare and social assistance, an industry that has seen gargantuan employment growth over the past two decades. 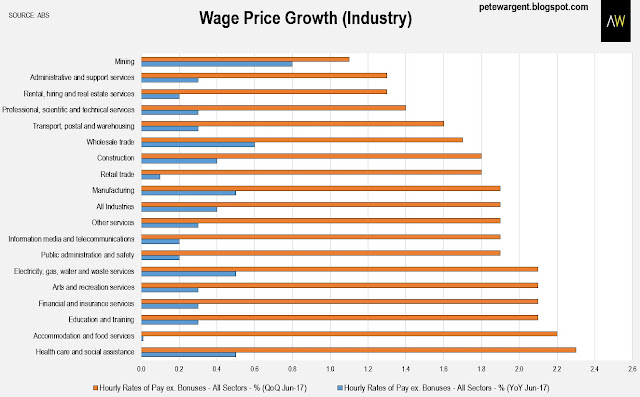 Education and training has been another area of focus for wages growth, perhaps reflective of the surge in international students hailing from Asia.

Wages growth in financial and insurance services remains quite moderate at +2.1 per cent.

With wages growth stuck at these low levels there are few inflationary pressures around, and there's pretty much zero chance of interest rates being hiked any time soon.

An optimist might say that in unrounded figures annual wages growth is marginally higher than it was in the final quarter of 2016, though that might be clutching at straws a bit.

Including bonuses, wages growth was better, suggesting that the bottom may well now be in.

Indeed, with minimum wages increases taking effect from 1 July, annual wages growth will very likely be stronger next time around.

With hiring in the labour market improving strongly in 2017 - and with other forward-looking indicators appearing quite robust - the Reserve Bank anticipates a return to full employment, but also that it may well take a few years for that to play out.

In the meantime, it seems that many employees will have a tough gig negotiating pay rises.

Jobs figures due out tomorrow! 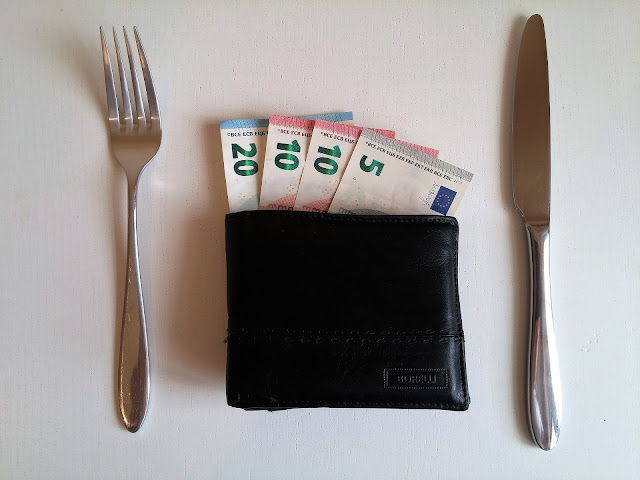