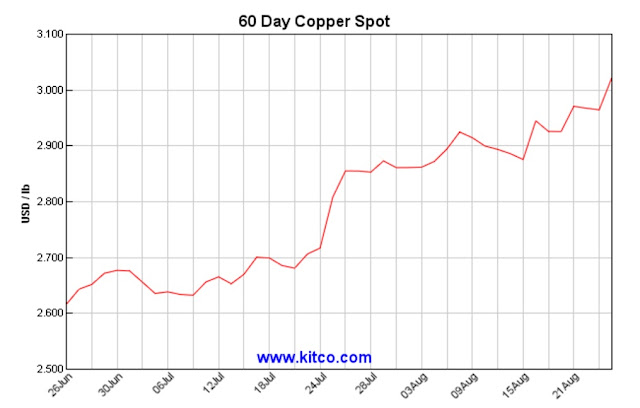 Globally, activity has been picking up, with the Eurozone now growing along with the rest of the world's economies.

In fact, all 45 countries in the OECD are now growing together at the same time, which is the first time that has happened since 2007.

And it's not just copper that is benefiting from global growth.

The iron ore price been has been on a huge run-up since June, while Australian thermal coal prices have also soared to above $100/tonne.

Together these two commodities alone comprise nearly 40 per cent of Australia's index of commodity prices, as measured by the Reserve Bank.

BHP Billiton reported an outlandish surge in profits this week - a profit of $7.4 billion from a statutory loss of $8.3 billion last year, leading to a tripling of the dividend - which was largely attributable to a doubling of the coking coal price since fiscal 2016.

The prices of zinc, aluminium, and nickel have also been tearing higher.

After a correction of about 8 per cent in June and July, Australia's commodity price index remained more than 17 per cent higher year-on-year last month.

And on this evidence, there are more gains to come.

Meanwhile, it appears that the feared mining 'capex cliff' is finally over, some 4.5 years after it began.

So it seems that the lingering clouds are at last beginning to clear for Australia's economy after nearly half a decade of drag from declining resources construction.