The distant beating of jungle drums is getting just that bit harder to ignore as the Australian economy continues to pick up the pace.

It's true that the much stronger jobs figures seen in 2017 are a lagging indicator, but job vacancies surveys are pointing to good things ahead.

The reading for business confidence rose to +9, in June 2017 well ahead of the long run average of +6.

And business conditions have stormed to +15, which is the highest reading in 9 years and follows the other key measure of conditions already reported.

The long run average reading for the series is +5.

Granted things promptly got worse last time we reached these heights, but this survey now sits a world away from the stuttering results of 2014. 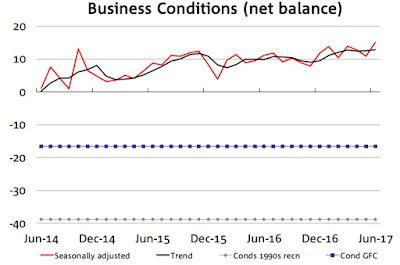 
Conditions looked relatively upbeat across all industries except for mining, with even retail turning in a much improved result.

Capacity utilisation rates point to further declines in unemployment, and even the labour costs index has broken out, suggesting that stronger wages growth may also follow in time.

Of the mainland states, Queensland has seen a huge leap in business confidence to +13, now overtaking New South Wales +10.

Consumer confidence is expected to follow this series higher.

Markets have seen enough and are now pricing a rate hike before the end of 2018.

Despite this, it seems likely that the core inflation rate for the second quarter of 2017 will remain under the target 2 to 3 per cent range.

The inflation report is due for release on July 27.