I thought I'd hold off from pooling my Census thoughts for a few days to let all of the usual ageing population pieces subside.

With the median age now ticking over to 38, it was always going to be a popular take on the 2016 Census.

By way of a typical example, Rick in The Australian noted back on June 27 that a middle-aged generation of Aussies is being sandwiched between an "ageing population" with "fewer young people coming after", and so on. 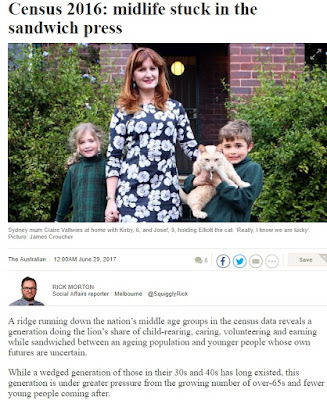 I did my usual first cut of slicing and dicing of the figures by individual year of age, which as expected produced a markedly different shape to the population pyramid.

For me, by far the most striking news was - as I anticipated in a piece reported in The Australian itself on 8 September 2015 ("Waiting for housing's next spending wave") - the massive surge in the younger cohort aged from 25 to 32.

The legendary M. Pascoe did his usual excellent job of reporting my findings in what was a lead online story in The Sydney Morning Herald online, and in The Age:

"Wargent writes that it's necessary to drill down a level to get the really interesting demographic stuff. While the Census showed Australia overall is ageing, there's been a noticeable lift in the number of people aged between 25 to 32" reported M. Pascoe.

And below you can again see my chart which showed by dicing up the population by age, there is what I coined a "demographic tsunami" on its way, which in turn will have material implications for housing market demand. 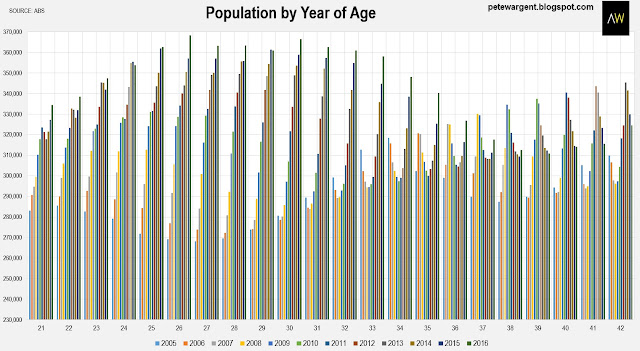 This was a hugely popular article from M. Pascoe as evidenced by the scores of Tweets and social media shares. My key argument, as I explained in more detail here, was that:


"Australia's migration and visa programmes have become largely tilted towards the under 30s, and, more lately, to international students.

And to be clear it's immigration that's been driving the recent acceleration in population growth, not births.

Splitting out the Census figures by year of age thus reveals a significant demographic wave of the resident population about to move towards the typical homebuying age."


Roll on to today, and Rick in The Australian was back, this time to announce a feature he wrote on...the boom in those aged 25 to their early thirties. 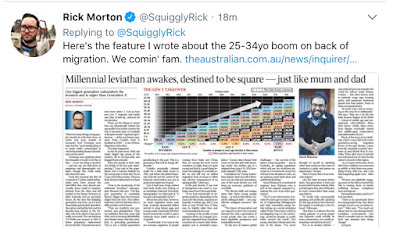 The key points in the article this time around were that...there has been a big surge in the number of those aged from 25 to their early thirties, largely driven by immigration from Asia:

"Now is the awakening of the Millennial leviathan" says demographer Bernard Salt..."

If you thought last week was good, the coming week will be an absolute ripper, with more on the Census to come, and a raft of interesting news due out, kicking off with Building Approvals on Monday. Stay tuned!
Posted by Pete Wargent at 18:38