It was only a couple of months ago that the Reserve Bank of Australia (RBA) seemed to be somewhat painted into a corner.

Since then, there has been a general improvement in reported data and a number of business surveys, to the extent that markets are beginning to price an interest rate hike late next calendar year.

Most importantly, full time employment has reportedly snapped 124,000 higher since September, with notable strength reported across the last five months, at about 20,000 per month.

Engineering construction, having declined by 43 per cent since the peak of the resources construction boom in 2012, is also now rising again.

The Holden closure and the shuttering of the auto assembly industry is still cited by some as the potential cause of a recession, even though this has been known about for years.

A challenge on a far greater scale given that a total of nearly 1.1 million Aussies are directly employed in construction is likely to be the headwinds created by the eventual downturn in residential building.

Yesterday's building approvals figures recorded quite a sharp year-on-year decline in the number of dwellings approved, as broadly expected, and as I looked at in more detail here.

Some more welcome news for the RBA was that the value of non-residential construction approved over the past year has increased to $42 billion.

This figure represents a very strong 17 per cent year-on-year increase.

Although not inflation-adjusted this series for non-residential work approved now exceeds the peaks reached in 2010 following the Rudd stimulus packages, which were designed to promote increased activity in schools and education, health and hospitals, infrastructure (as well as white goods and slabs of VB).

New South Wales has seen a number of major projects approved in recent years - you can actually see the recent spike driven by James Packer's casino and hotel development at Barangaroo - with the annual value of total non-residential building approved in the state tracking at $13.5 billion.

Victoria isn't too far behind at $11.7 billion, while there was a strong lift in Queensland in the month of May to an annual total of $7.9 billion. 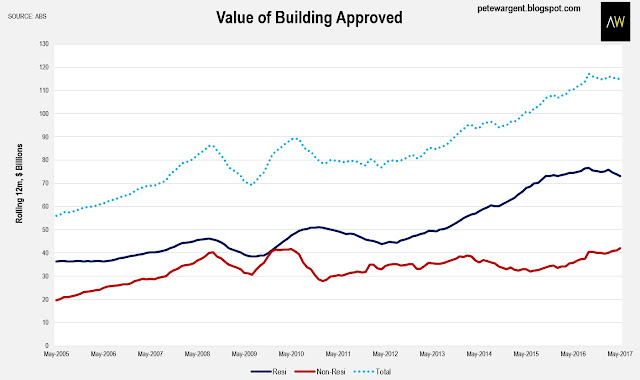 Adding in the total value of residential building approved brings up a total of $115 billion.

There is a salient risk that some residential projects never make it to the construction phase - indeed, I can see a few such candidates from right where I'm sitting - but for now at least the total value of approvals remains only marginally below the peak of $117 billion hit in September 2016. 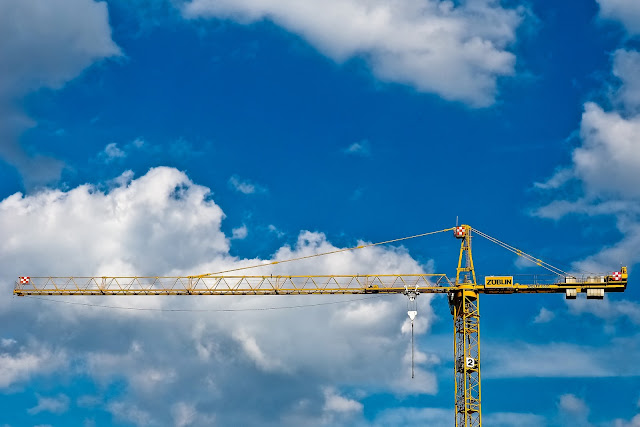