Louis MMXVIII runs with the bulls

SQM Research reported the usual slight November rise in vacancy rates, up to 2.2 per cent, for a national total of 70,795 vacancies.

Despite the residential construction industry going like the clappers in 2017, the national figure is considerably lower than the 2.5 per cent or 78,629 vacancies seen in November last year, which helps to put some of the oversupply banter into a more balanced perspective.

In fact, vacancy rates were lower year-on-year across all of the capital cities except for one - being Sydney, which increased to 2.1 per cent from 1.8 per cent a year earlier.

In the second largest city, Melbourne, the vacancy rate remains slightly lower than a year earlier, down from 2 per cent to 1.8 per cent.

Despite the record levels of building activity in Melbourne, thunderous population growth has threatened to overwhelm the new supply.

The chart below shows the vacancy rates by capital city smoothed on a 6mMA basis, though not seasonally adjusted.

Canberra and Hobart continue to have tight and very tight rental markets respectively - asking rents for houses in Hobart have shot nearly 21 per cent higher over the past three years.

Meanwhile Adelaide is very quietly drifting in that direction, with a vacancy rate of just 1.4 per cent in November.

Perth has by far the slackest rental market with a vacancy rate of 4.5 per cent, albeit well down from an alarming 5.2 per cent last year.

The rental market has been very weak in Perth since 2013, although median asking rents for houses in the Western Australian capital at last edged up by +0.8 per cent to be slightly higher on a rolling quarterly basis. 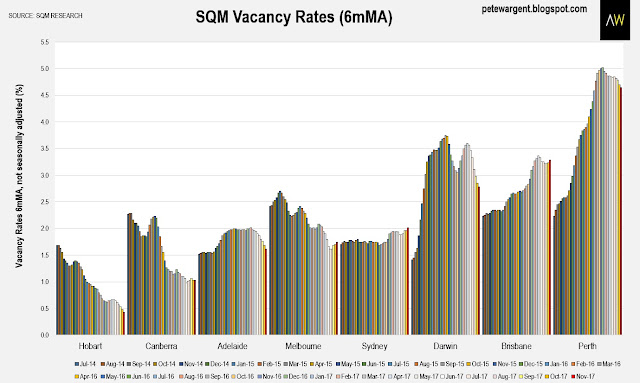 The recent jump in Sydney vacancies has partly been driven by a spate of completions in the Hills District (which had a 3.7 per cent vacancy rate in November) as well as the usual seasonal weakness in the Parramatta LGA (2.2 per cent) according to SQM's figures, so it will be interesting to see how efficiently or otherwise these vacancies are absorbed in the new year.

Asking rents for Sydney units are now just +2 per cent higher over the past year, compared to +6.5 per cent for units in Melbourne.

Louis Christopher, forecaster nonpareil and the king of SQM Research, remains relatively upbeat on housing market prospects for 2018, estimating that banks will be able to lend a little more freely in the new year.

"The seasonal dips and rises [in auction clearance rates] occur because of the seasonal rise in listings that occur each spring.

They don’t call it the “spring selling season” for nothing. Yet each year this seasonality is mistaken by the media and/or some of our most senior economists for some type of major market slowdown or correction that is about to herald “the crash”.

Christopher is forecasting Sydney and Melbourne dwelling prices rising solidly in 2018, so bidding action at auctions in the new year will warrant watching closely.

"Our forecast for Sydney is for a 4-8% price rise for Sydney and a 7-12% rise for Melbourne." reiterated SQM Research in its media release. 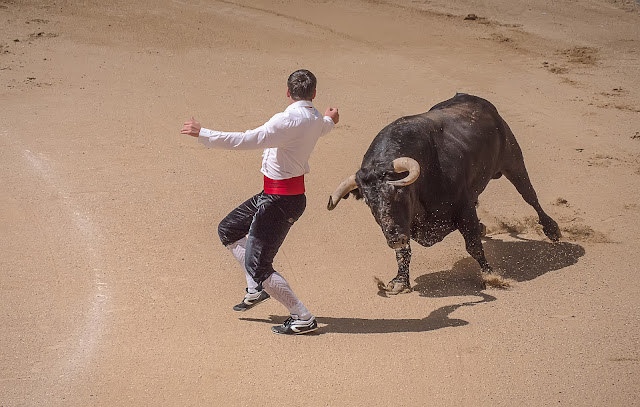