Flat as a tack

Some unusual commentary and conclusions were drawn about the price of flats and apartments this week, derived from an Urbis survey of unsettled off-the-plan prices each quarter (which alas does not compare like-for-like sales).

Apparently apartment prices boomed in Gold Coast and Melbourne, but nosedived in Brisbane.

This sort of thing tends to happen when you get an excellent research report (Urbis), which is then quoted by a passable media article (often with a somewhat misleading headline), and then misinterpreted in the blogosphere, sometimes deliberately.

In reality what tends to happen is the first user of a new apartment or townhouse pays a significant 'newness premium', which may be eroded on resale, especially in a soft market.

For all the talk of property booms and unsustainable prices, median price growth in established apartments has, on average, been pretty muted outside Sydney, despite record low mortgage rates through this cycle.

Looking at the last ten years of official figures from the ABS, you find that only Sydney has recorded strong growth in the price of attached dwellings (and even this came off the back of nearly half a decade of flat or falling prices).

Hobart has also gone on a bit of a run over the past couple of years, the ultra-tight market sending the median asking price for a unit above $300,000 for the first time. 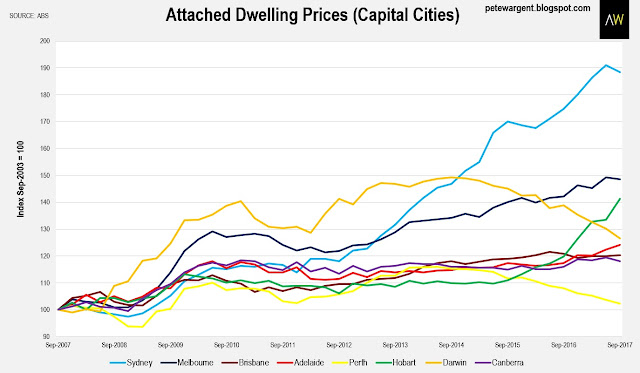 Melbourne's attached dwelling price index recorded a compound annual growth rate of 4 per cent over the decade to September 2017, which is solid, if not exactly wild.

All other capital cities have only seen moderate price growth over the past decade - hardly a rapidly inflating bubble looking set to burst - though if you wound the clock back to 2003 the growth rates would be considerably stronger in Perth and Darwin, taking into account the early years of the resources boom. 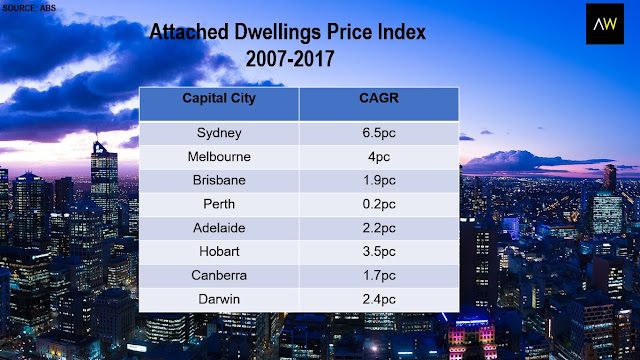 In Sydney, price growth clearly has been strong, and consequently sites are under development stretching practically from Bondi to Bathurst (the surest indicator that new unit prices have risen above replacement cost).

In Brisbane median apartment prices (and asking prices) have declined only marginally over the past year, however the rental market has been very soft.

The decade's annual average price growth in five of the eight capital cities has been below the implied inflation target of 2.5 per cent.

Compare that with a genuinely pumping bubble like the price of Bitcoin, where year-on-year price growth just exceeded 2,350 per cent.