Australia's economy showed growth at a decent lick of +5.9 per cent over the year to September 2017. 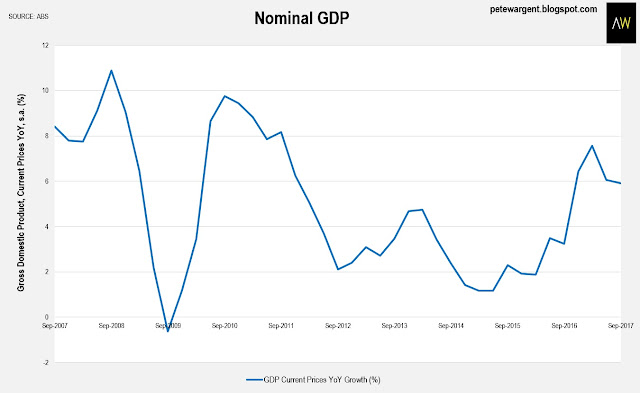 In real terms GDP grew by a shade under +2.85 per cent, the fastest result in 15 months, and annualised growth was solid enough in per capita terms too. 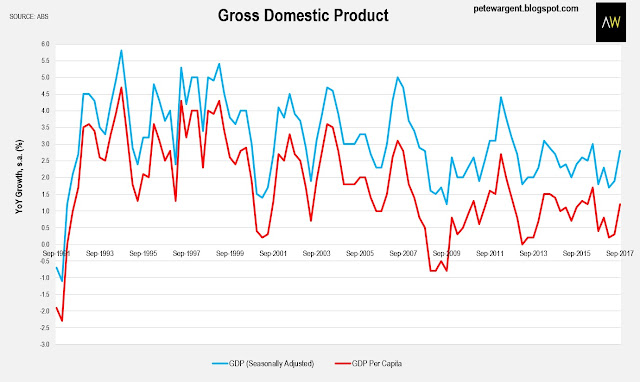 With profits comfortably surging to record highs, the result was driven by a strong surge in business investment (+7.5 per cent, the strongest reading since 2012, and above the long run average) meaning more jobs are on the way.

Most industries are expanding solidly, though agriculture has fallen back abruptly over the past year.

At the state level, New South Wales leads the way with strongest growth in final demand, and with clear signs of improvement in Western Australia.

Meanwhile domestic demand generally looks to be in the best nick in half a decade (largely because the mining downturn has run its course).

Gross domestic income grew by +5 per cent over the year in real terms, and real net national disposable income was up by a solid +4.5 per cent. 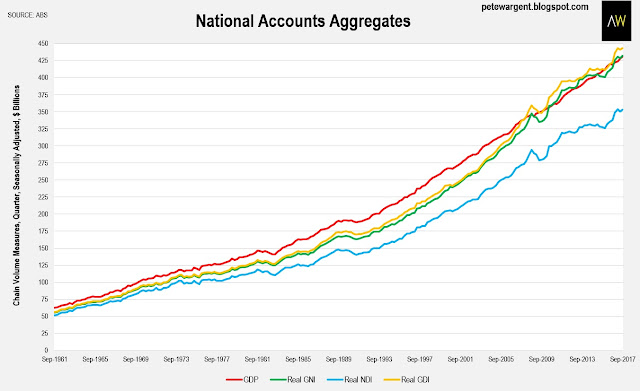 The weakest part of the National Accounts report related to consumption, with household expenditure having stalled somewhat, now being just +2.2 per cent higher over the year, following a very weak period for wages growth.

However, the ABS reported that compensation of employees "grew strongly" by +1.2 per cent over the quarter, and with household income growth outpacing expenditure the household saving ratio ticked up just a notch to +3.2 per cent. 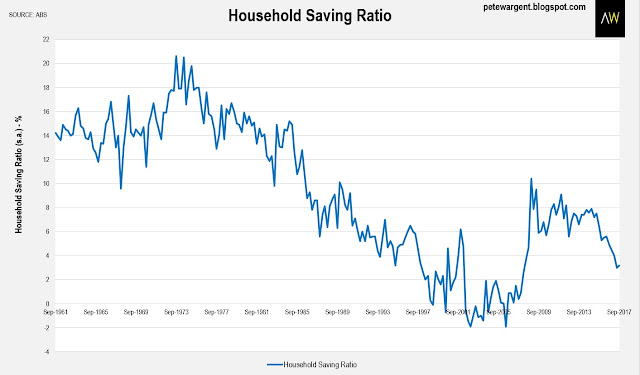 "The increase in wages was consistent with the stronger employment and hours worked data that has been reported in the labour force survey.”

Interestingly, households are now paying less interest than 6 to 9 months earlier, as more borrowers took the opportunity to switch to cheaper principal and interest mortgages.

It looks as though new dwelling construction will no longer contribute to growth in the economy for this construction cycle - while major renovation works declined this quarter - but non-residential construction is rising hard in its stead.

Growth has been decent in 2017 and looks set to hit 3 per cent in 2018, in keeping with the wider theme of steady improvement, albeit at a rather sedate pace.

There is plenty of public expenditure on transport and other infrastructure projects in the pipeline, and over time the unemployment rate looks set to continue declining from 4½ year lows.

The implied price deflator for household consumption is now very low indeed, with the major banks and most economists seeming to agree that interest rates will stay on hold for at least the next year (some, including Westpac and Capital Economics, think longer than that).

For all the usual carping, the outlook has generally continued to improve, and the base case for 2018 doesn't look to shabby: growth of about 3 per cent, the unemployment rate falling to about 5 per cent, and interest rates on hold for the whole of 2018.

Not a headline generator, but still, not too bad as Australia gets set to rack up a 27th consecutive year of growth. 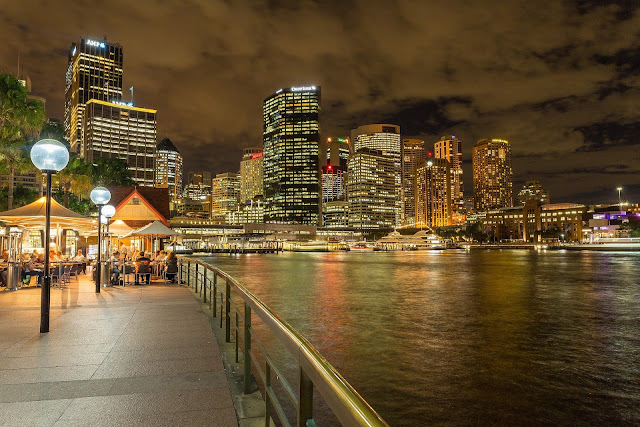