Fortunately this one is an easy question to answer, because there's a very simple de facto measure of mortgage stress, being late payments - or mortgage balances 30+ days in arrears.

30+ day prime arrears rates have been flat for the past three months at just 1.38 per cent.

So there's not been too much struggling going on, in reality.

The prime arrears rate is up a bit from 1.17 per cent a year earlier, so there's been something of a recent increase, partly relating to interest-only borrowers being switched across to principal repayments (you can click on the charts to expand them). 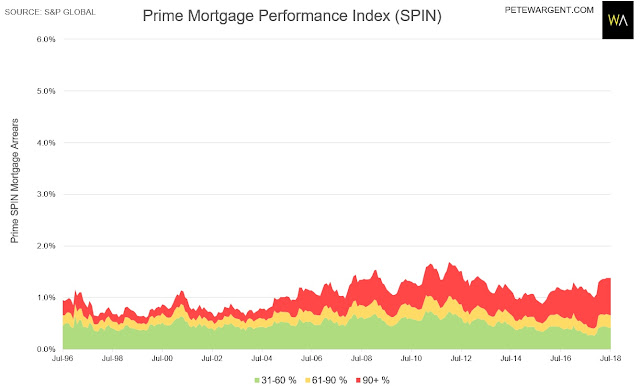 Although there's various tosh written about subprime lending in Australia, low-doc loans have by and large gone the way of the dodo, and non-conforming mortgage arrears have been falling for about a decade now. 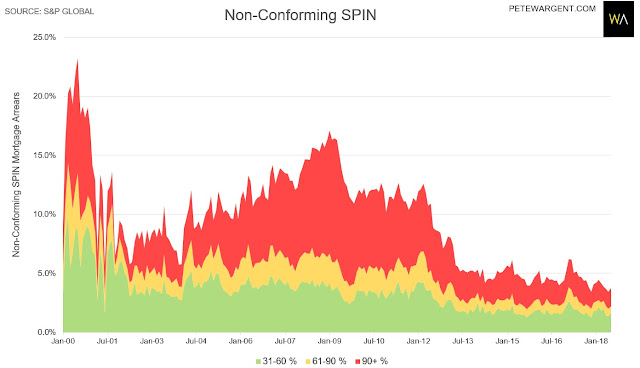 So the answer to the question of whether we're experiencing record high mortgage stress is clear.

This is positive news, reflecting a reasonably healthy economy and steadily improved lending standards over time, although of course the constant cry for the infantilisation of borrowers continues unabated.

The latest ruling from ASIC relates to credit card limits, and becomes legally effective from 1 January 2019.

If I'm reading the media release correctly, this effectively introduces a deemed P&I payment when calculating mortgage serviceability for borrowers with credit cards, to ensure they can pay off the credit card limit within three years.

I really can't see the point of this; some people clearly have way too much time on their hands.

Whatever next? Fingerprint samples, biometric testing, and CCTV surveillance?

Back to the mortgage figures and a 30+ day mortgage arrears rate of under 1½ per cent, then - where exactly are the borrowers in arrears?

Summarily, mainly in Western Australia, the Northern Territory, and regional Queensland, this largely relating to the resources downturn since 2013.

In short, we've had half a decade of recession-like conditions in Western Australia, but elsewhere arrears remain very low, and in any case the outlook is now brightening significantly in WA and for the resources sector. 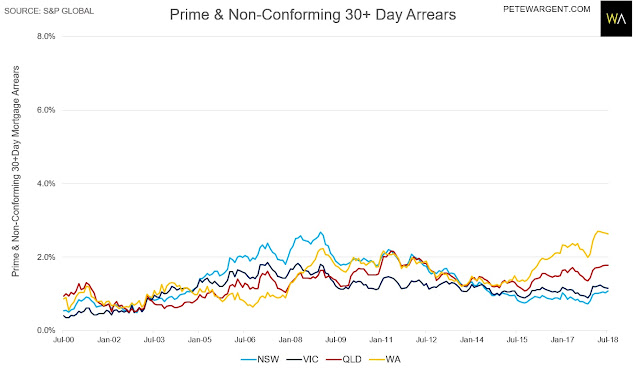 If I could be bothered to copy across the chart for the other states and territories you'd note similar trends, with very benign arrears in three jurisdictions but the Northern Territory in a bit of a quagmire with a 30+ day arrears rate of 2.67 per cent.

What's all the fuss about then, given that the unemployment rate has dropped to the lowest level since 2012 and is continuing to decline?

It's tempting to say 'beats me'.

But there is, in my opinion, one area of concern, and that relates to interest-only (IO) borrowers being booted across to principal repayments.

Most borrowers will manage this transition just fine, of course.

But some have become a bit too comfortable with paying only the interest - it being human nature to adjust financial habits to prevailing circumstances - and will get into trouble if the hard line on IO loans persists.

Remember, even in a genuine financial crisis most borrowers will keep making their repayments quite comfortably, but the unravelling is driven by what happens at the margin.

A matter of opinion

In my opinion there's little point in punishing potentially stressed borrowers by sending them to the wall.

If financial stability and fewer IO loans is the goal, restrict the flow to new borrowers.

The good news is the reduced flow of new IO loans has already pushed the share of IO loans outstanding to multi-decade lows, so much of the heavy lifting has already been done.

Outside recessions investors have generally tended to have lower arrears rates than homeowners.

However, from what I observe and am hearing anecdotally this may be about to change unless existing IO borrowers that need the breathing space are cut some slack. 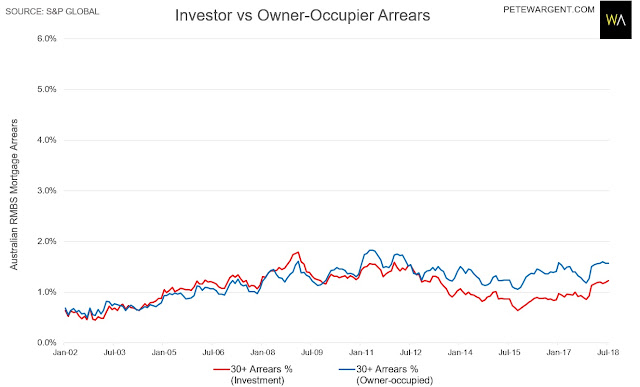 The figures clearly confirm there are no major issues with mortgage arrears up to July 2018.

So my question is: why create a new problem where there isn't an existing one?

Especially when the flow of new IO loans is now tracking at just ~15 per cent of new lending.