I am indeed a so-termed vested interest: I would like to see full employment, stronger wages and household income growth, the Aussie economy growing at least at trend or ideally above trend, and I don't want to see the housing market getting zinged unnecessarily.

Yep, you got me on that one.

Firstly, the flow of new interest-only (IO) loans in Q2 2018 was a meagre 16.6 per cent of residential term loans, absolutely miles below the initially proposed cap of 30 per cent (and a world apart from the 45.6 per cent record high of Q2 2015).

With far fewer loans written overall from a year earlier in spite of a strong increase in the Aussie population, this represented a modest increase in percentage terms from the preceding quarter.

But even if more IO loans were to be written henceforth I personally don't believe that would be a bad thing.

The last thing we need is $½ trillion of IO mortgages being reset with undue haste - unless you actually want to see the housing market get stiffed, which of course many people do - and some breathing space would surely be welcomed by a portion of existing IO borrowers. 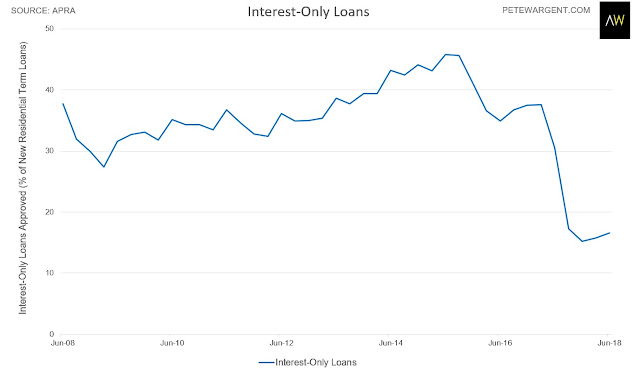 Regardless of your views on that, there was another enormous decline in the stock of IO loans in the June quarter, with IO loan balances outstanding now having plunged some $119 billion lower over the past five quarters.

The share of IO loans outstanding through June 2018 was thus by some margin at the lowest level across the entire data series at about 29 per cent, down from close to 40 per cent in late 2015.


Note that these numbers only run to the end of the 2018 financial year; at the current trajectory the share of IO loans will likely be around 26.9 per cent by the end of this month, a figure that was truly unthinkable only last year, and the lowest level in decades. 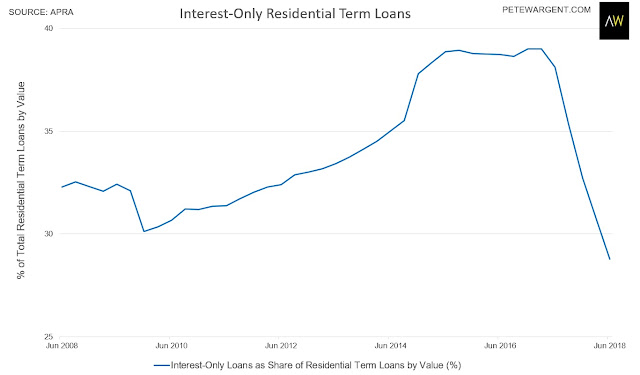 Secondly, in relation to the 'red alert' on lending standards, the loan-to-value (LVR) ratios on new loans have been tightening incrementally for the better part of half a decade now.

'Red alert'? You must be having a giraffe, surely - we've literally never seen lending standards remotely like it! 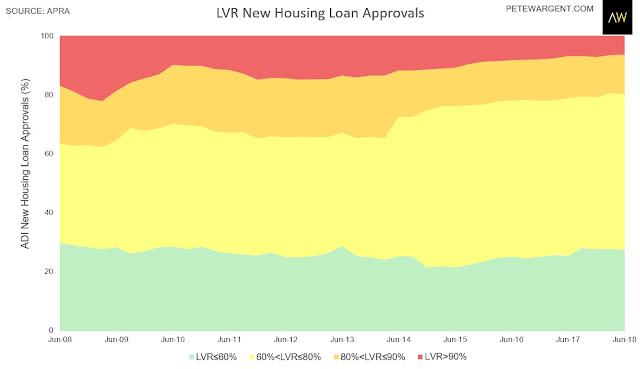 Thirdly, low-doc and other non-standard loans are also tracking at the lowest level on record.

Fourthly, the quarterly flow of new investment loans plunged by the best part of $5 billion year-on-year, so how you conclude a sudden loosening of standards from that I can't fathom (automatic red card for anyone directly comparing volumes from Q1 to Q2).

And fifthly, a word that is devilishly hard to spell at the best of times, many cite loans approved outside serviceability, noting that these should be ringing 'alarm bells' to the regulator.

Fair suck of the sauce bottle but this almost certainly represents a timing issue and reflects tighter lending standards, not looser.