No new Australian Prime Ministers to report yet in September - thus far, anyway.

In fact, we'll probably have to wait at least another eight months for the next one, though a number of ex-PMs are doing their best to speed things along a bit from the sidelines.

Nevertheless, it's been another rollicking week of social media in #auspol.

Anna P had a good crack at winning Tweet of the week with an abortive attempt to spruik a vehicle manufacturing boom in the Sunshine State. 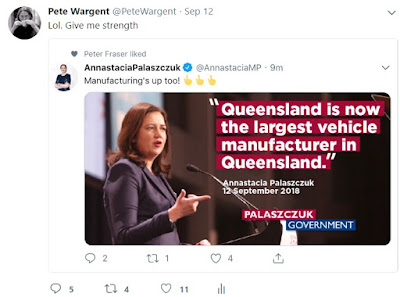 Maybe the social media team were hoping the electorate is too dumb to notice or care - but surely those getting beyond the tautological confusion of Queensland being the biggest vehicle manufacturer in Queensland would decipher that since nobody manufactures vehicles in Australia anymore the claim is a distinctly hollow one.

Lest you fear that this blog is descending into shameless partisanship, the flailing Coalition still managed to pick up this week's Twitter gong with its failed foray into gangstalicious hip hop music.

Sigh, what a shambles, you could barely make it up.

Have a great weekend all!