Aussie dwelling prices declined by 0.6 per cent over the year to June 2018 as the market grappled with tighter lending standards, together with a sweeping range of measures implemented to cool activity (from foreign buyer duties, to restrictions on investment and interest-only loans, reduced self-managed super fund lending for residential property, changes to deductibility of expenses, and more).

Today I'll run through how some of the various capital city markets have been faring and why in half a dozen charts.

First up, the total value of dwelling stock was $6.93 trillion at the end of the 2018 financial year, only slightly up from $6.82 trillion a year earlier (click the charts to expand). 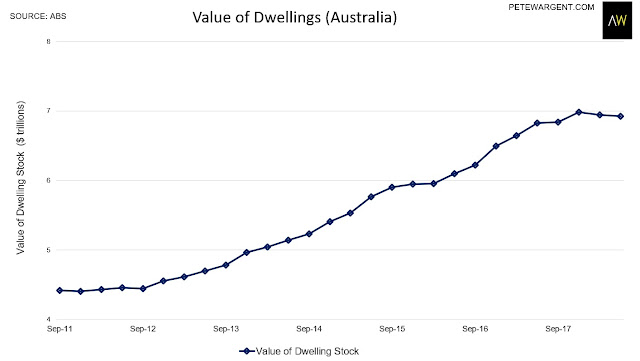 Between June 2017 and June 2018 the 8 capital city weighted average resi price index was down by 0.6 per cent. 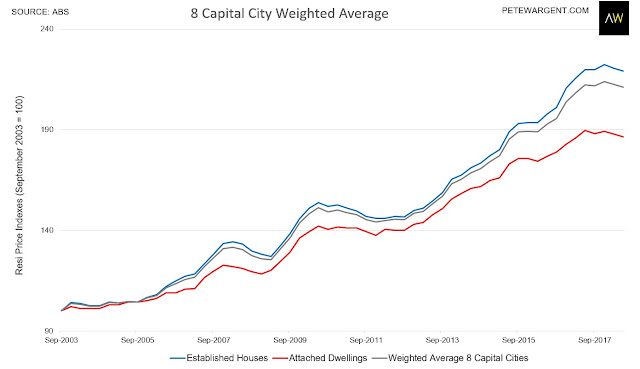 The 60 Minutes program garnered a lot of attention this week with its now-traditional 'looming housing crisis' exposé, the segment somewhat unjustly taking each analyst in turn and clipping out everything but their doom case scenarios (at least three of the main contributors have since protested that in part their views were misrepresented...I'm shocked, lol).

Admittedly I haven't watched it.

As you might expect our old mucker Martin North of Digital Finance Analytics snared the headlines as his worst case scenario was a worse worst case than the other worst case scenarios, cautioning of a possible price crash of 40 per cent (for some reason the figure always seems to be 40 per cent in Australia, a bit like the golden ratio in nature, but for house prices).

It's tempting to be dismissive of a dyed-in-the-wool pessimist such as Northy who's been warning of a gush of mortgage stress and defaults since at least 2009 that I can remember, when he warned potential borrowers that they would be 'shocked and surprised' when the official cash rate reverted to 5 per cent.

Would-be homebuyers were indeed shocked and surprised, but mainly because the Sydney house price index went on to increase by 100 per cent rather than due to mortgage stress.

Forecasting errors aside, the truth is that this slowdown has been engineered amidst a unique combination of circumstances, so nobody really knows what happens next. So let's see.

The main driver of the declines over FY2018 was the most populous capital city of Sydney, where detached house prices were off by 4 per cent, with the attached dwelling price index down by 3 per cent.

It's interesting to note that on average apartment prices have held up better than house prices in Sydney, reflective of the reduced borrowing capacity for many investors, although truthfully the picture varies quite significantly across the city, and some areas are faring much worse than others.

The best definition of a housing boom that I've heard is 'when even the crap sells' - thanks kindly to Phil on Twitter - but that phase of the Sydney market cycle has long since passed.

Some A-grade properties are still commanding strong interest and prices in Sydney, but the inferior stock is struggling, while some sub-regions are contending with all the new supply resulting in a glut of listings on the market. 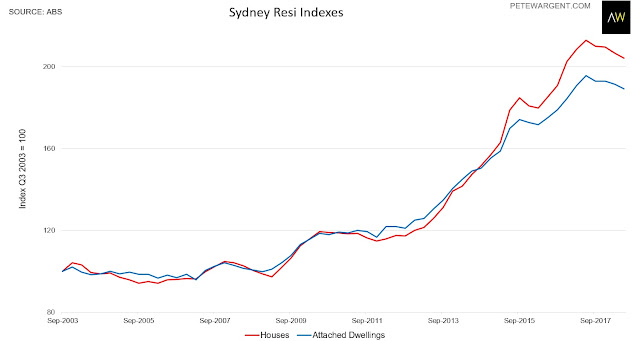 It's also interesting to note how the movement of an index can differ from the lived experience for housing market participants, as I discussed on the Business Insider Devils and Details podcast here.

I can recall going to Sydney auctions in Q1 2017 where the amount of money being thrown around between competing bidders suddenly went completely deranged, yet within a matter of a few short weeks all that froth was wiped away by further APRA measures announced at the end of the first quarter.

The lived or 'on the ground' experienced for me, then, was that transaction prices had fallen by up to 10 per cent all but overnight, but of course an index incorporates a far broader range of transactions that my tiny cross-section of the market.

Some of the other markets recorded dwelling price growth, including Brisbane which reported a 0.7 per cent increase in the June quarter, while Hobart - a relatively small capital city for the purposes of the weighted average calculation - notched a thumping 15.5 per cent year-on-year increase.

Australia's other major capital city of Melbourne saw prices tick down by 0.8 per cent in Q2, although prices were still up by 2.3 per cent in the year to the June 2018 quarter.

The two main resources capitals have already been in a multi-year decline but may now be levelling out, with Perth prices down by less than 1 per cent from a year earlier (although, up in the Top End, Darwin is still in decline, with prices down by more than 6 per cent). 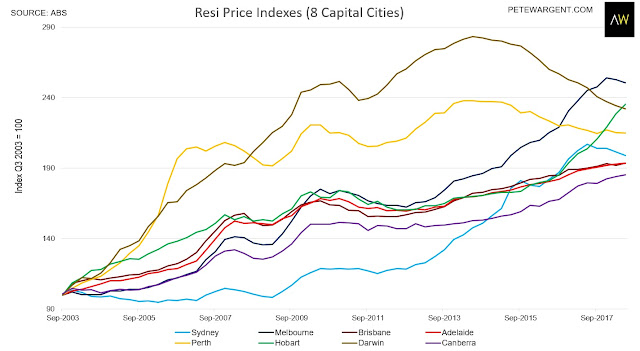 At the state level the mean price in New South Wales is steadily trending down, with Western Australia now well off the lows seen last year as the resources sector rebounds. 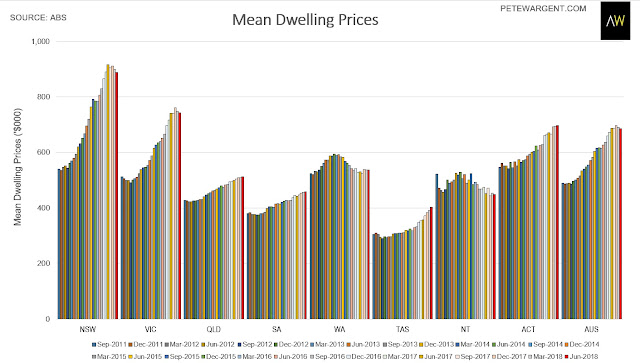 We shouldn't read too much into the total number of dwellings as at June 2018, being a preliminary estimate only of 10,093,700.

In saying that there's some evidence to suggest that Greater Sydney has not overbuilt housing versus underlying demand to anything like the extent that people seem to think through this cycle. 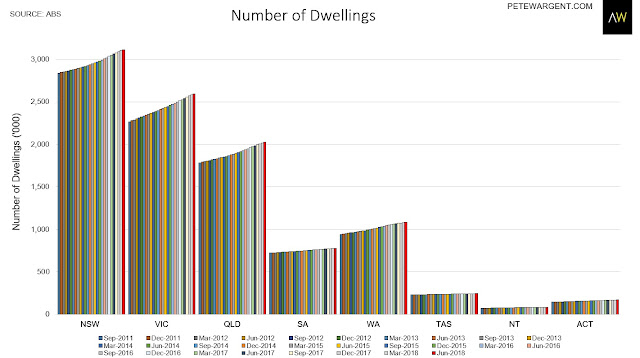 There are still many apartment projects under construction in Sydney, of course.

However, a 5-year increase in the number of New South Wales dwellings of about 227,000 or ~7.9 per cent looks to be on the low side relative to underlying demand (the reliability or otherwise of preliminary estimates notwithstanding), with the state's estimated resident population having grown by more than 115,000 per annum of late.

A mixed picture overall, but with Sydney now clearly well into its downswing, and Melbourne recording a much weaker result in Q2.

The capital city with the best medium-term prospects appears to be Brisbane, while Perth homeowners will be hopeful that the worst has now passed.

So, that's it, with Sydney house prices down by 4 per cent, albeit still precisely 30 per cent higher than when the 'apocalypse now' stuff began in earnest in 2015.