Spirit in the sky?

It had become quite apparent by late 2014 that there was something extraordinary underway with regards to new 'high-rise' apartment construction in Australia.

Outside Sydney, we're now coming down the other side of that mountain. Over the past 18 months, the trend in the number of new apartment starts in Queensland has continued to fall, and fall, and fall. 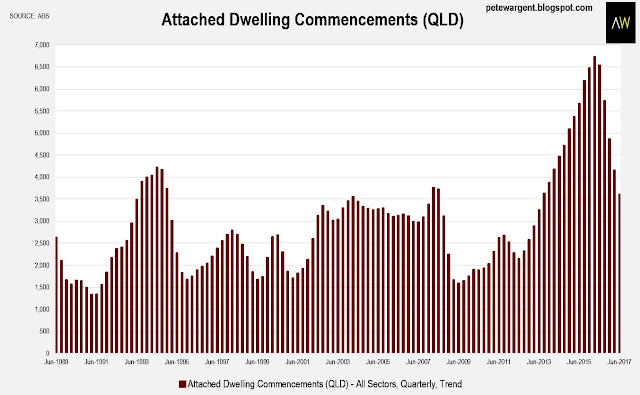 In inner city Brisbane, new project commencements have slowed to a crawl. This is one of several ways in which that the apartment market in inner Brisbane is adjusting, as it needs to.

It's not like the supply of apartments is anything new - we've been talking about it for three years now.

In its latest Financial Stability Review (FSR) the Reserve Bank of Australia (RBA) projects a flood of new completions in Brisbane in FY2018, especially in the city precinct.

Despite this, the RBA reported "few signs of significant settlement difficulties", which is generally a positive market indicator. Meanwhile the RBA noted that the "moderate" rate of price decline for apartments is now "slowing".

It's become much harder to source finance to buy off the plan in Brisbane, which is naturally cooling the market. Approvals have dropped dramatically, numerous Queensland developers have gone to the wall, and more are expected to follow in the coming months.

A salutary lesson in property investment right there...from your own Central Bank, no less! Many of those caught out in the new high-rise developments will likely be interstate and foreign investors, largely hailing from mainland China.

While there is a lot of stock still due to hit the market - particularly in the CBD - construction activity on the ground has clearly slowed, and the actual number of completions in FY2018 will surely end up being materially lower than the RBA's forecasts. 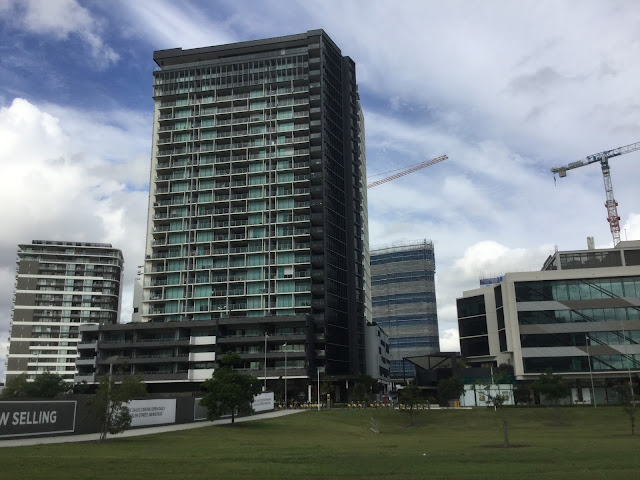 You can see this for yourself, by the way, simply by taking a walk around the inner city: there are any number of stalled, delayed, or mothballed projects in suburbs such as Woolloongabba, West End, South Brisbane, Newstead, and so on. I note here that some of my fellow inner-city-dwelling latte-sippers have observed the very same thing:

RBA liaison with industry participants and banks expressed confidence that new supply will be well absorbed by the market (as you'd expect), but there will be continued downward pressure on rents. That may be tough if you're the landlord, but not necessarily a bad thing overall, and the renters are moving in. 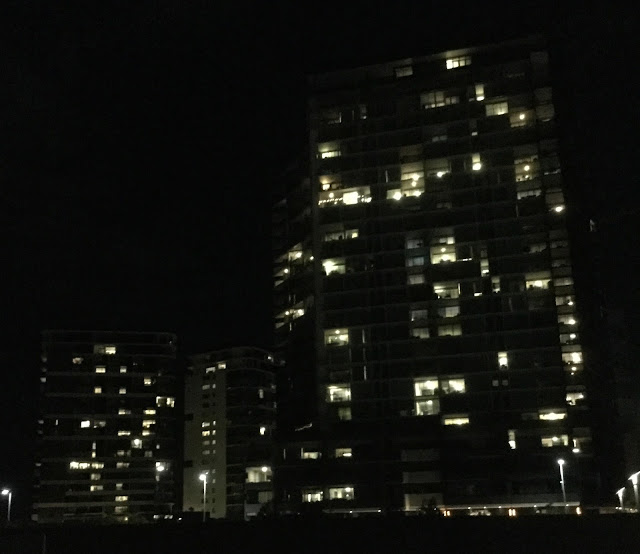 By the second quarter of calendar year 2017 the number of attached dwellings under construction in the Sunshine State had already dived by 15 per cent from the 2015 peak, though there was still plenty in the pipeline. 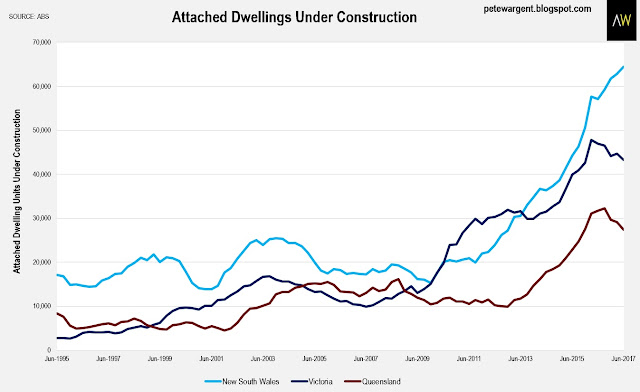 This suggests that by the end of 2017, the number of apartments under construction will have fallen quite a large part of the way back towards their likely 'new normal', given that proportionately many more attached dwellings will be built in the future, as compared to the past.

The other thing that's helping to drag the market back into balance, is net interstate migration, mainly from New South Wales. The official ABS estimates had interstate migration heading into Queensland back up to around +15,700 by the end of March, from about +5,600 at the cyclical nadir.

Analysts will torture and torture these numbers until they confess, no doubt, but it can't be stressed enough that the numbers aren't actually real, however much emphasis is put on citing individual figures.

The data lags massively for one thing. Moreover it's derived from change of usual residence statistics via Medicare records (and let's face it, who updates these on a timely basis, hmm?). 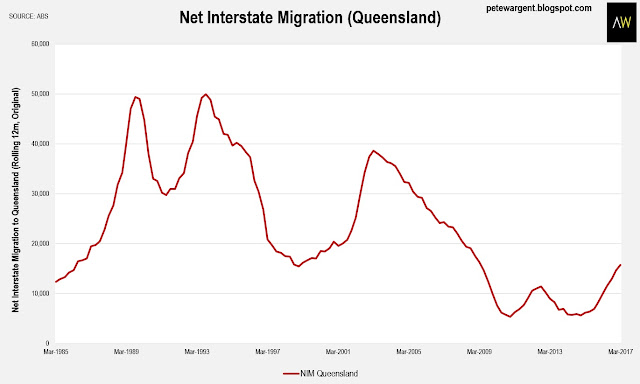 These figures are only a guide, then, but just from hanging out in the inner city it's become clear that there has been a surge in interest in relocating to Brisbane since 2015.

It wouldn't be a great surprise if in 2018 the interstate migration figures are much higher than this - previous cycles have shown that when this cyclical migration trend gets underway, it can ramp up very quickly.


Driven as much by net overseas migration, annual statewide population growth had already picked up to an estimated +75,400 in the first quarter of 2017, about +28 per cent higher than in September 2015.

The March quarter figure of +23,869 for the preliminary estimated resident population of Queensland was up by more than +26 per cent from a year earlier. If this proves to be anywhere near correct it is something akin to a population boom.

Even those most recent figures relate to the period from January to March 2017, which was the best part of a year ago now, but any way you look at it, the supply story is now likely to be one of rebalancing. 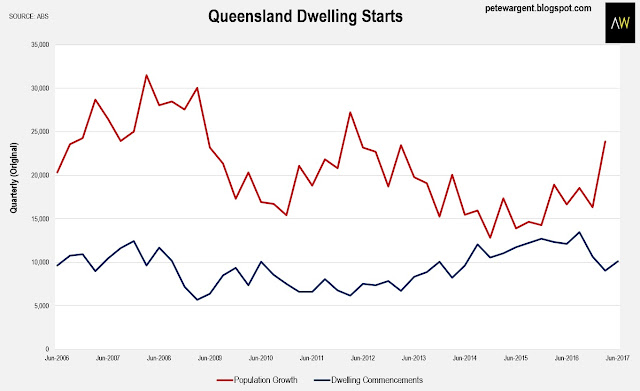 Annual employment growth in the state has been seriously, woefully patchy since the peak of resources construction, but in August 2017 it bolted to around a decade-high of +95,400, albeit largely driven by part-time employment.

Unusually, Queensland finds itself joint-top of the employment growth tree alongside Victoria, at least for now, so that's another important trend to watch.

Overall, it's easy to construct a doomsday or calamity scenario by adding up every apartment project and dwelling unit ever approved in Greater Brisbane and comparing this to historic demand for attached dwellings.

But if you instead look at what's actually going to complete over the next few financial years, and compare this to the future demand for inner city living in Brisbane, you'll come up with a far less dramatic picture.

So far, we've seen declining asking rents, and some fairly marginal declines in asking prices for apartments. Interestingly the rental pain appears likely to be shared by dated rental stock across Brisbane.

The soft rental markets are not only restricted to inner Brisbane apartments, as young bargain-hunting renters take up the new inner city living option, spurred by new projects such as Howard Smith Wharves and the massive $3 billion Queen's Wharf Project.

In the meantime, I'll definitely be on the lookout for apartment and townhouse bargains in New Farm in 2018, where lowball offers should certainly be the order of the day.

All of which reminds me, I must get on to those Medicare records to update my address... 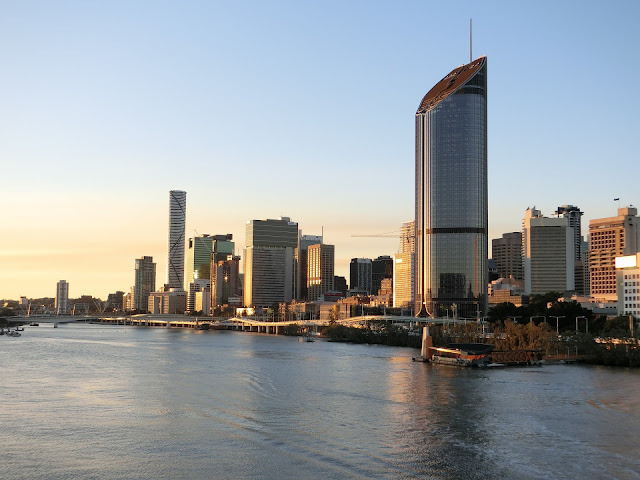