The Reserve Bank of Australia (RBA) released its Financial Aggregates figures for the month of September 2017, which revealed a softer month for credit growth ex-housing, with total credit growth still tracking at +5.4 per cent over the year.

Annual business credit growth is no more than ticking along (+4.3 per cent), while personal credit remains in negative territory.

Housing credit expanded by +6.6 per cent over the year to September, actually a little faster than the +6.4 per cent pace seen a year earlier, contrary to what you might think.

However, a closer inspection shows that the monthly rate of growth was +0.48 per cent in seasonally adjusted terms, the slowest increase since March 2016, so lending constraints are gradually taking effect.

Total housing credit is now sitting at a tick under $1.7 trillion.

Still powering along for now then, although there has been a concerted push to get borrowers off interest-only products lately. 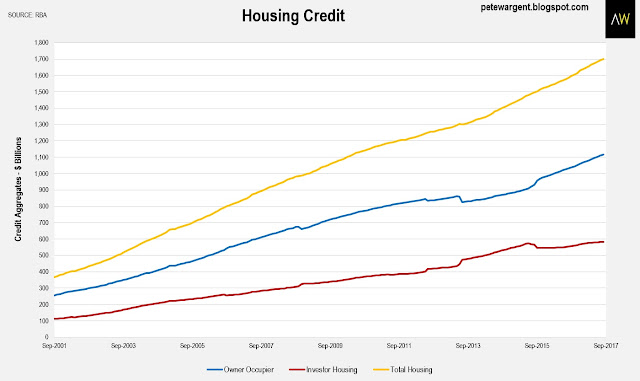 The purpose of some $59 billion of loans has now been switched from investor to owner-occupier since July 2015.

The RBA data showed that after accounting for loan switching, the growth in investor credit slowed to +7.2 per cent, with further declines almost certain to follow.

APRA also released its monthly ADI figures, which showed investor credit growth slowing to a crawl - implying that the non-banks have picked up some market share in this sector - with the total value of owner-occupier loans up by +0.48 per cent in the month.

None of the major banks is now even remotely close the 10 per cent 'speed limit' or regulatory threshold for investment lending, with only Westpac of the main players still pushing this sector along. 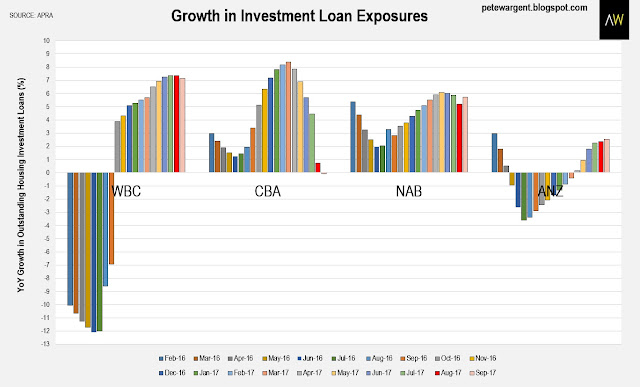 A number of the second-tier lenders, including Suncorp, Macquarie, and others, have significantly cut back their investment mortgage exposure, perhaps suggesting some regulatory pressure.

While total housing credit is still rising at a solid pace, investor lending is clearly being snipped back sharply.

With population growth now tracking at historically high levels as I looked at here, it remains to be seen whether rents begin to rise sharply in the two largest cities in 2018 (personally, I believe that this is likely, especially in Melbourne, though few appear to agree with me at this juncture).

The major banks are now growing their investment loan books at way below the arbitrary 10 per cent cap, so theoretically at least investor loans could begin to feature more prominently again next year, but this may need the regulator to remove its foot from lenders' throats.

In other news, new home sales continued the decline begun in 2015 with another -6.1 per cent drop in September 2017, according to Housing Industry Association (HIA) figures. 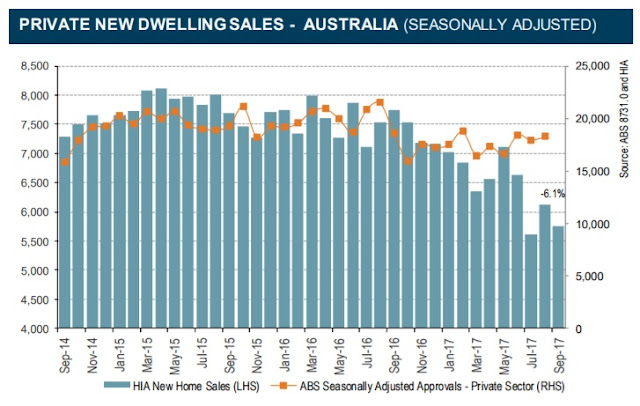 The drop was driven by a significant -16.7 per cent drop in multi-unit sales.

New home sales are a leading indicator for building approvals, and following the longest ever upturn in building there now comes the dwelling construction downturn. 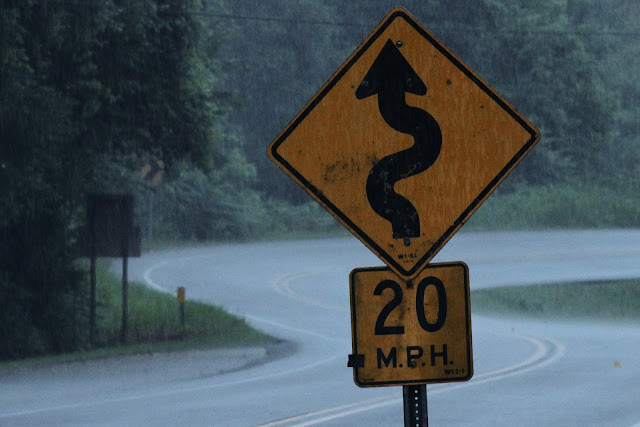