The trend in housing finance eased a bit, to a total of around $33 billion in September.

The value of investor loans was possibly pumped up a little in the preceding month by refinancing activity, but the monthly trend remains steadily down to about $12 billion, as tweaks to lending standards continue to lean against activity.

The $33 billion result and the related easing in investor loans were variously described as a "walloping fall", "down the gurgler", a "staggering drop", and even plain old "grim".

Recall that this result comes precisely one month after investor loans had "bounced back", "spiked", "staged a comeback", and all the rest of it.

I guess that goes with the territory when you have to find something new and exciting to say every month. Anyhoo, here's the chart, in all of its walloping grimness! 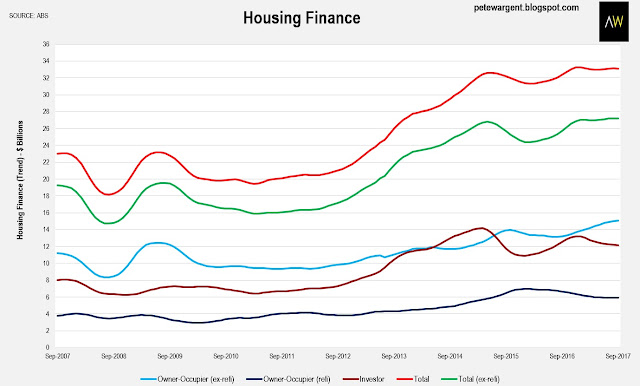 Owner-occupiers continue to settle on the near-record levels of new stock, with commitments for new dwellings continuing to surge to the highest level since 1978. 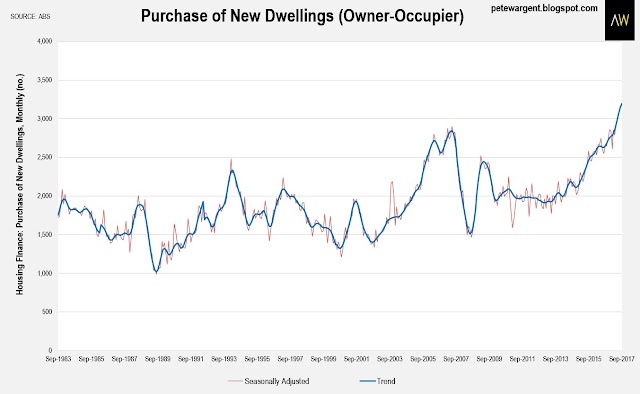 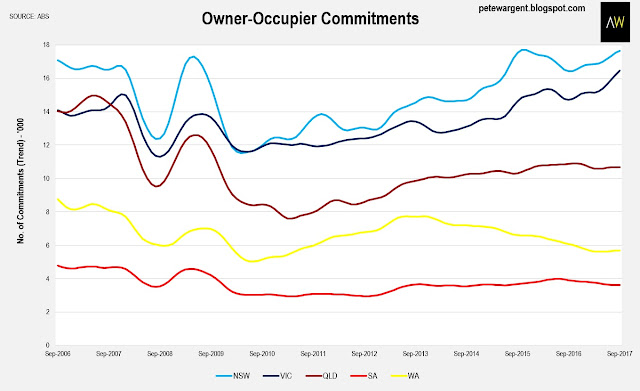 The trend number of owner-occupier commitments in Western Australia has been edging slightly higher for the past 5 months, suggesting moderately improving conditions.

September is a shorter month than August, as well as playing host to a public holiday and a Grand Final.

Not surprisingly, then, in original terms the number of first homebuyer loans pulled back slightly from a 93-month high. 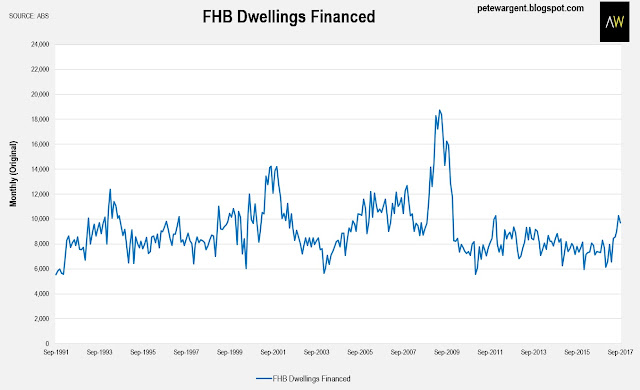 As a share of housing finance commitments, however, first homebuyer loans rose again, now levitating from 17.2 per cent to 17.4 per cent, to notch a 4½-year high.

The return of the first homebuyer has largely been driven by incentives in New South Wales and Victoria.

Despite the reported monthly decline, in truth first homebuyer numbers were markedly higher over the third quarter in both NSW (58 per cent) and VIC (32 per cent) - it all depends on the preferred narrative, though the figures should be watched closely for revisions. 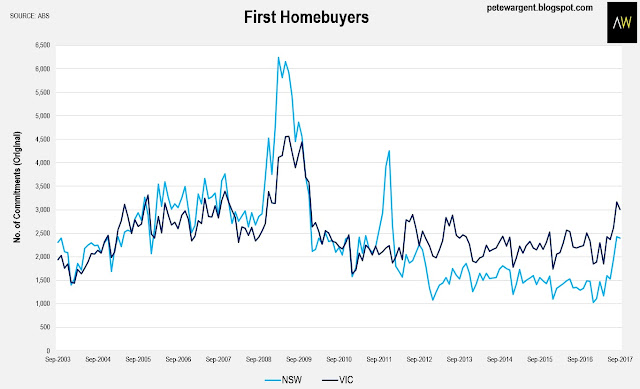 On average, first homebuyers are borrowing a little less than a year earlier, perhaps implying that, at the margin, the incentives have encouraged more wavering buyers onto the ladder.

For non-first homebuyers loan sizes are now rising again, however, as they are wont to do once markets get to grips with new lending rules. 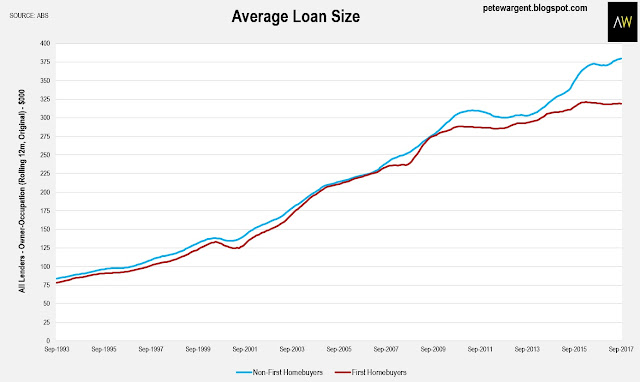 Nothing particularly unexpected to see here, with investor loans declining in response to tighter lending criteria, trending down to sit about 8 per cent lower than at the end of last year, in turn leading to a fairly steady result overall.

The headline numbers suggest housing finance is flattening, as demanded by market commentators and regulators alike.

This suggests it will become more challenging over the next few years for investors to find outperforming markets, following a very easy ride over the past decade, when simply buying properties in Sydney resulted in jackpot returns.

Outstanding 2016 Census research from Terry Rawnsley at SGE Economics & Planning showed that the capital cities created 900,000 new jobs over the five years to 2016, while the whole of regional Australia combined created close to zero. Zip.

Sydney alone created nearly 500,000 jobs jet over the past decade, with the inner suburbs accounting for a disproportionately high share of the employment growth.

Drilling down a level, Rawnsley found that employment growth has become more heavily focused on the inner cities of the largest metropolises, especially Sydney and Melbourne.

It's worth remembering that these figures comprise a period where resources construction declined, so the contrast over the next five years may not be quite so stark.

Still, with employment growth exploding in the inner cities and investor loans being tightened, upwards pressure returning on rents seems likely in 2018. 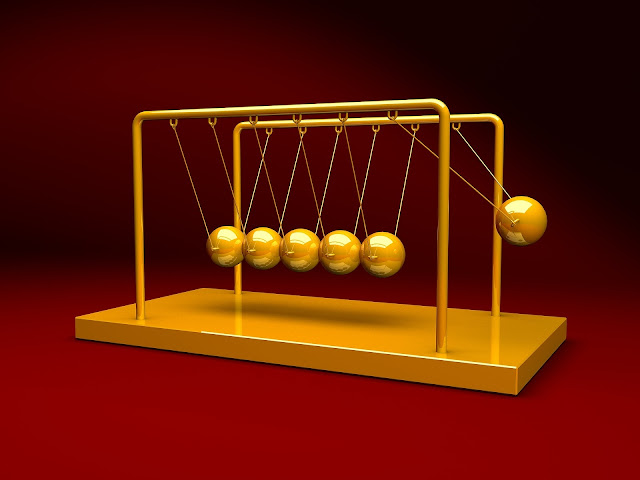