We all know that employment growth since the peak of the resources construction boom in 2012 has been all about Sydney and Melbourne.

Queensland is suddenly off to the races, with trend employment growth blazing +4.62 per cent higher across the year to October, by far its strongest annual result since before the financial crisis. 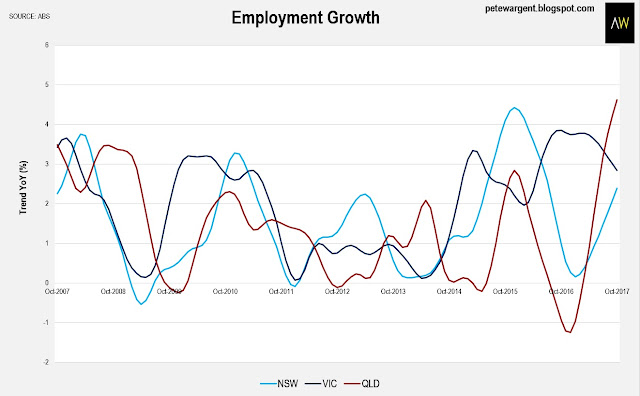 Of course, it's harder for the most populous states to record such a large percentage increase, but even so, this has suddenly become too big a move to ignore.

Some questions we've not had to ponder too often in Queensland since 2007 include: where, why, & what are the new jobs? And will it continue?

Where? Pretty much all around the state, as I've looked at here previously (Queensland is the one mainland state where employment is not excessively capital city focused).

Queensland is also coming from a relatively low base, after a rough trot, and much of the hiring has been part time in nature.

The likely drivers of the upturn might range from a surge of Chinese visitors and the dollar-driven tourism industry, the commodity price rebound creating jobs upstate, a slew of public sector and NDIS hiring, and perhaps some late spillover or multiplier from the now-fading residential construction bonanza.

Agriculture exports have been strong, so that's another possible bright spot, plus some increased aggregate demand creating services jobs as interstate migration has picked up.

Just from driving around various parts of SEQ, there are evidently an awful lot of roads being built right now, while there are several significant infrastructure projects underway or about to commence in Brisbane.

We'll get more detailed numbers in due course on the historic hiring.

But what of next year, will Queensland jobs growth be sustained or sustainable as we count down to the Commonwealth Games?

The answer looks to be a qualified "yes".

SEEK's job advertisements data for October 2017 just showed Queensland ads pumping 19 per cent higher than a year earlier, which tends to be a decent leading indicator for hiring.

Notably, some of the most improved industries nationally included those which Queensland is heavily exposed to. 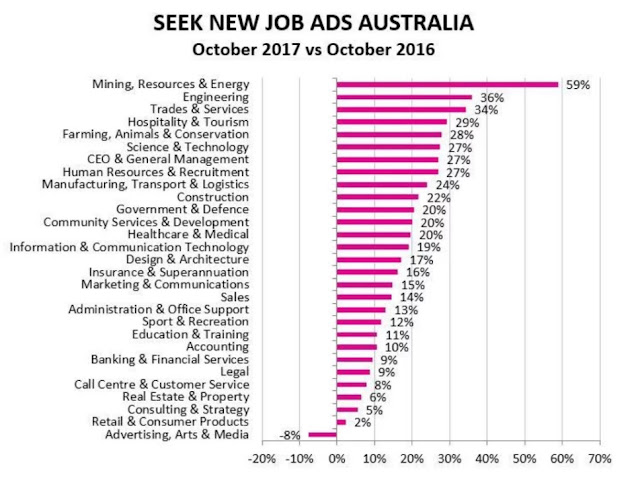 Early days, of course, but every good upswing had to start somewhere!