There's been a long-running debate in Australia about what might or might not happen if curbs were implemented on landlords, particularly in the form of tweaks to tax legislation.

So the theory goes, nothing would change, because for every landlord that didn't buy, a renter would purchase a home instead.

The real world isn't that simple, of course, and indeed the long run figures in Australia show three occasions when landlords were 'shocked' out of the market, and on each occasion rents spiked (at least on a national basis, if not everywhere).

It might be interesting to watch London for an interesting test case, since there have been recent curbs on interest deductibility for landlords, as well as a 3 per cent stamp duty surcharge on second homes.

Such changes to housing market policy take a while to flow through, however, so it will be interesting to watch how this plays out over the next few years.

The latest ARLA figures don't look too promising for London renters, it must be said. 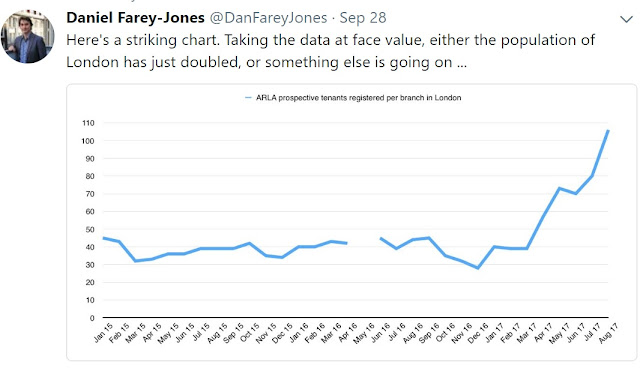 ARLA is a vested interest, I get that, but still...watch this space.

In other UK news, Hometrack reported that Manchester again notched the fastest annual house price growth, at +7.3 per cent over the year to August 2017.