Most indicators suggest that Melbourne has moved into first place as the city creating the most jobs and growth.

That said, the New South Wales Treasurer handed down a 2017-18 Budget yesterday revealing that the state's finances are in rude health.

Each month I've been tracking the unprecedented stamp duty take resulting from Sydney's property boom, a gift which has kept on giving.

It was reported yesterday that the state beat projections in 2016-17 to hit another surplus of $4.5 billion, with NSW now in a negative net debt position, boasting a net worth totalling more than a quarter of a trillion dollars, and with enough left over to set up a $15 billion Future Fund.

To complete the virtuous circle the state now plans to unleash a towering $72.7 billion spend on infrastructure, incorporating an impressive range of projects, a further record $7.7 billion for health infrastructure, and $4.2 billion to build 26 new schools and to fund upgrades.

This is a positive move for Sydney, and the harbour city will need to get these projects moving to fill the hole left by any coming downturn in the rate of apartment building.

We seem to have reached an inflection point in this property cycle.

Lower interest rates spurred record numbers of property investors into the market since 2012.

But now regulators and banks are winding back interest-only loans and have introduced tougher serviceability measures and higher mortgage rates for investment products.

And this is at a time when demand for rentals has never been higher, with employees changing roles and locations more frequently than in times past, and a record boom in international visitors and students.

While the rate of dwelling construction has been impressive, I recently mused here whether the number of available rental properties will keep up with demand this year and next.

Vacancy rates declined across much of Australia in May, with the national vacancy rate dropping from 2.4 per cent to 2.2 per cent.

Vacancies remained super-tight in Hobart (0.6 per cent) and Canberra (1 per cent), while in Sydney the vacancy rate declined to just 1.8 per cent.

Vacancy rates ticked down in Brisbane, Perth, and Darwin in May, though from elevated levels in the case of Perth and Darwin, where median asking rents continue to slide.

In Melbourne the vacancy rate is almost in freefall, halving from more than 3 per cent at the end of 2014 to a 7-year low of just 1.5 per cent. 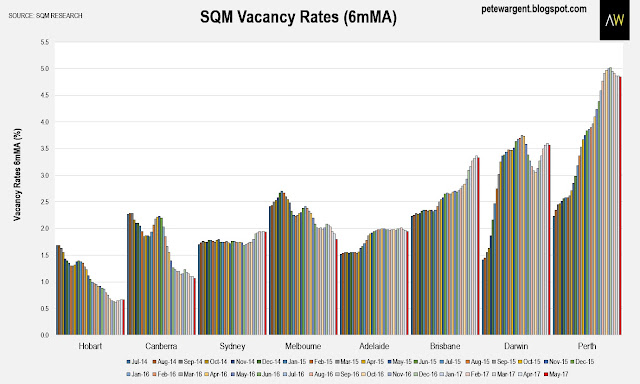 The vacancy rates figures suggest that rental prices may soon level off in the resources capitals, while there is mounting evidence of a tightening rental market in the two most populous capital cities.

If rents do start to rise again then this has implications for monetary policy since rents form an important part of the consumer price index (combined with rising energy prices, a strengthening rental market could be enough to scope out further rate cuts).

On the other side of the ledger, oil prices have declined to their lowest level in 9 months.

Overall, the figures suggested that the rental markets in the weakest cities are approaching their cyclical nadir, while most other markets ex-Brisbane are either tight or tightening.

Most notably, the feared oversupply in Melbourne has not materialised - if anything the number of available rentals is failing to keep pace with demand.