City prices up 10 per cent

Capital city residential property prices rose by 2.2 per cent in the March 2017 quarter, to be 10.2 per cent higher over the year.

Apartment price growth has been strong in Sydney in recent years, but overall established house prices have comfortably outperformed through this cycle to date, partly reflecting an apartment overbuild in some regions. 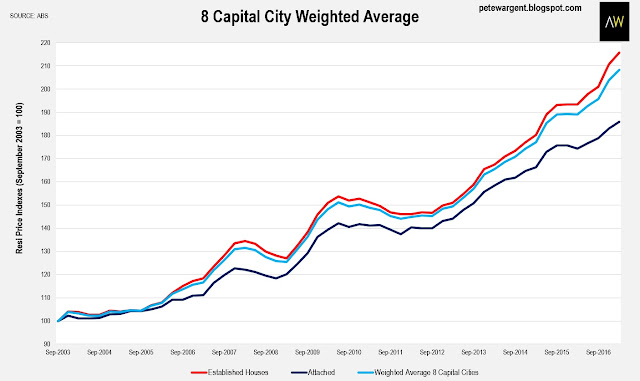 The total value of Australia's dwelling stock has now increased by 50 per cent since December 2011, rising by $2.2 trillion to a total of a shade over $6.6 trillion. 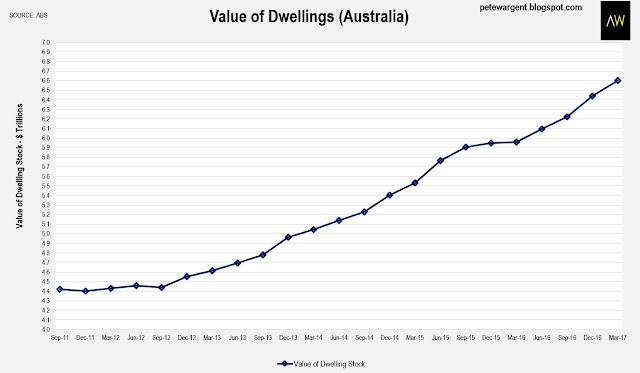 Over the year to March the strongest price growth was recorded by Sydney (14.4 per cent) and Melbourne (13.4 per cent), though it seems highly likely that Sydney's annual growth rate is now firmly on a downwards trajectory from here.

At the other end of the scale more annual price declines were suffered by Perth (-3.5 per cent) and Darwin (-5.9 per cent).

The tight Hobart market recorded the strongest quarterly gain (3.4 per cent) to be up by a boisterous 11.3 per cent over the past year.

Indexing the numbers back to 2003 shows how long run dwelling price performance between the capital cities is converging, with the resources capitals coming back down to earth following the peak of the mining boom. 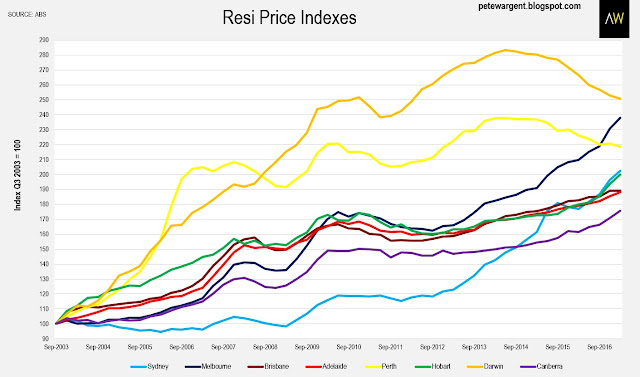 Reflecting the end of the resources construction boom, over the same timeframe mean prices were up by only 3 per cent in Western Australia and declined by 2 per cent in the Northern Territory. 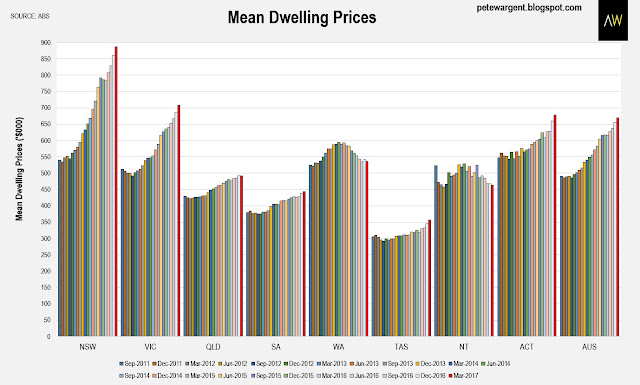 Of the $2.2 trillion increase in the total value of the dwelling stock since 2011, the three most populous states of New South Wales ($1.2 trillion), Victoria ($0.6 trillion), and Queensland ($206 billion) together accounted for 91.5 per cent of the increase. 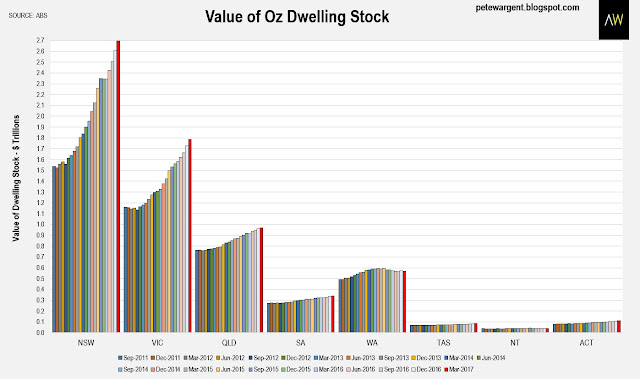 Finally, a quick look at the net increase in the dwelling stock, which has picked up the pace in swelling by 194,000 dwellings over the year to March 2017.

The March stock figures are preliminary and subject to revision - the increase looks decidedly low in New South Wales, for example - but the annual rate of increase has clearly picked up the pace since 2012. 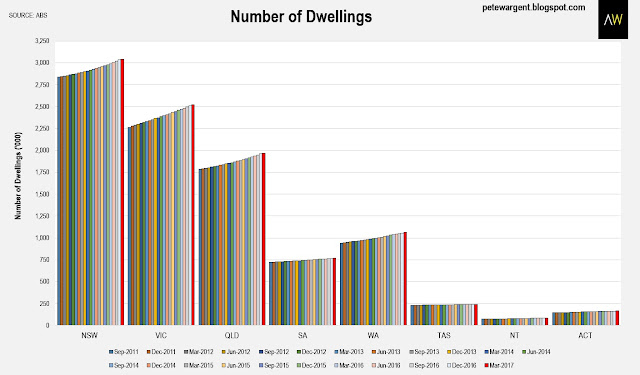 It's interesting to note that while Victoria has increased the size of its dwelling stock by 10.3 per cent over the past half decade - much faster than the 6.7 per cent increase in New South Wales - the strong annual increase of 2.2 per cent is still only just ahead of the state's rampant rate of population growth.

There were more strong gains in dwelling prices in Sydney (3 per cent) and Melbourne (3.1 per cent) across the first quarter of the calendar year.

Meanwhile Adelaide prices rose by 1.5 per cent to be 5 per cent higher over the year, and Canberra snuck in under the radar to record annual growth of 8.9 per cent.

The above having been said, the double digit annual growth rate is likely to represent the peak for this cycle, with a raft of macroprudential measures appearing well set to douse investor activity.