Not something we've been able to say too often in Australia in recent years, but actual capital expenditure increased a bit in the March 2017 quarter to just under $28 billion. 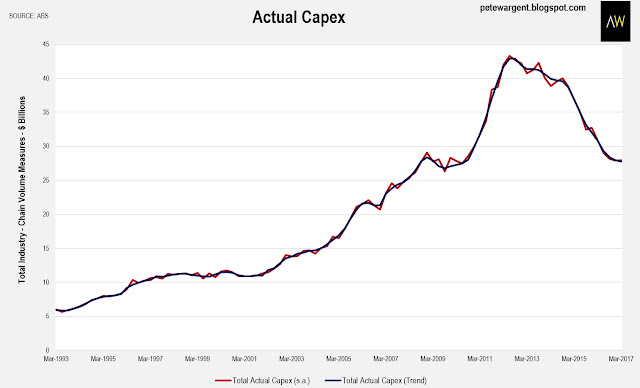 Actual mining capital expenditure increased for the first time since June 2014, again suggesting that the downturn in mining capex may be all but over as operators of existing projects continue to re-invest.

AIG reported this morning that its Performance of Manufacturing Index (PMI) gauge remained in expansionary territory for an 8th consecutive month with a reading of 54.8, and manufacturing capex also lifted nicely in the quarter, being up by about 6 per cent.

Looking ahead, though, the shuttering of the automotive assembly industry will keep a lid on investment plans in the manufacturing sector. 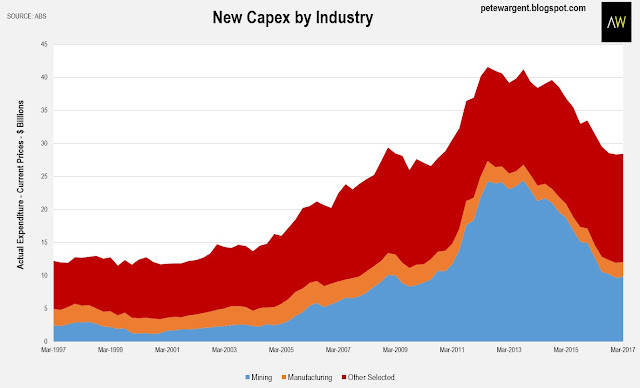 Looking at annualised figures, capex has increased solidly in New South Wales, Victoria, and Tasmania over the past year, as well as being up a little in Canberra.

However, capex has been obliterated in Western Australia, and has declined everywhere else too - the resources downturn. 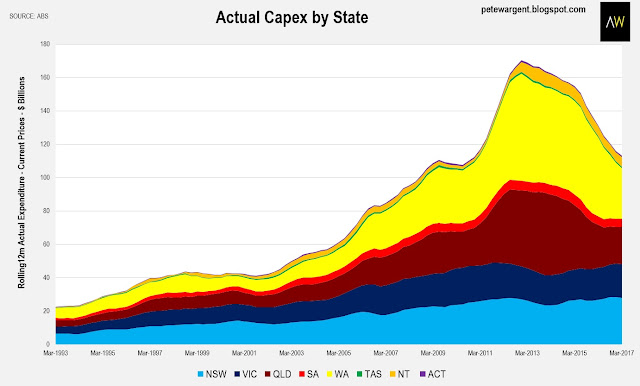 Plant and equipment investment was down just a tick, representing yet another confirmation that GDP growth in the first quarter is going to be a real fizzer, and possibly even negative.

With mining capex no longer dropping like a stone there may be brighter news ahead.

The sixth estimate for 2016/17 capex came in at $112.6 billion, which is an awful lot better than was feared this time last year!

Looking forward, the second estimate for 2017/18 investment plans came in at $85.4 billion, which was also 5 per cent higher than the estimate last quarter.

However, this still represents a 6.4 per cent decline on the equivalent estimate from last year, so the economy is far from out of the woods just yet.

Overall, then, it was a modestly good release, with just a suggestion of investment having turned a corner.


The New South Wales government is set to abolish stamp duty for first homebuyers spending up to $650,000 on established property (while raising the bar to the same threshold for new builds), and will offer further discounts on properties bought up to the price of $800,000.

This will is a huge lift for the established market, and including the abolition of stamps on LMI will represent savings of up to $34,360 on some first homebuyer purchases.

The government will also double the stamp duty surcharge for foreign investors to 8 per cent while lifting land tax for foreigners from 0.75 per cent to 2 per cent - a self-defeating move which over time will effectively strangle momentum from the construction cycle.