If you live in Sydney you couldn't help but notice the ramp up in projects since 2015, with the jackhammers rampaging practically around the clock in the harbour city.

And some of those projects have years to run, particularly the massive West Connex, the real cost of which has been estimated at being anywhere from $17 billion to $45 billion, depending on who is controlling the narrative.

Looking forward the infrastructure boom is set to swing elsewhere as the record stamp duty take in Sydney finally begins its long descent.

In absolute dollar terms, Victoria is set to experience a significant boost, particularly from the forthcoming $16.5 billion northeast link.

But with Melbourne's construction sector booming anyway, the shift will be most noticeable in Queensland as a range of transport projects kick off.

These will be supported by other inner Brisbane projects such as the flagship $3 billion plus Queen's Wharf project, and a number of others. 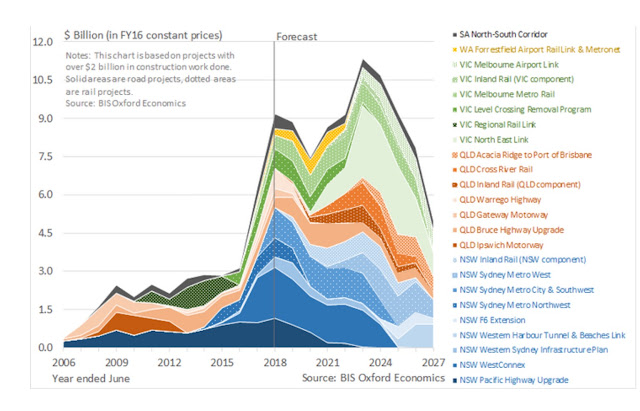 Brisbane is attracting interstate migrants and tourists in serious numbers, so these projects will definitely help to give the labour market an overdue boost.

While some project feasibilities are yet to be finalised, seven key projects are henceforth set to pump $12 billion into the Brisbane economy over the years ahead.

Some of the big ticket items for Brisbane will include the Cross River Rail ($5.4 billion), Queens Wharf ($3 billion plus), Brisbane Live ($2 billion, TBC), Howard Smith Wharves ($110 million), and the Brisbane Quarter ($1 billion).