Why wages are set to grow

Ichthys set to ramp up

Years ago when I lived in Darwin the vibe was all about investment.

A new defence base here, a new mining tenement there.

Those were heady days for the Northern Territory, with a labour shortage, booming wages and housing prices, and a new Prado on just about every second driveway.

The big one was always the Inpex Ichthys project.

All these years and a lazy $53 billion later, the behemoth gas project is finally ready to start exporting gas...for the next four decades at up to 9 million tonnes per annum at full capacity.

Paradoxically these are now tough times for the NT with the population in decline as the construction workers return home, but the revenue flows and profits will pay dividends for decades to come.

It's not just Ichthys...from Gladstone to Gorgon LNG export volumes have been beginning to ramp up.

Iron ore and especially coal have been delivering windfalls of late to the extent that Treasurer Frydenberg must think that Christmas has come early as tax revenues rise and the Federal Budget swings towards an imminent surplus.

And now just two years after observers were bemoaning these LNG 'white elephants' it's gas that could feasibly become Australia's most valuable export commodity, with monthly export values already topping $4 billion per month (even before Ichthys kicks in to gear). 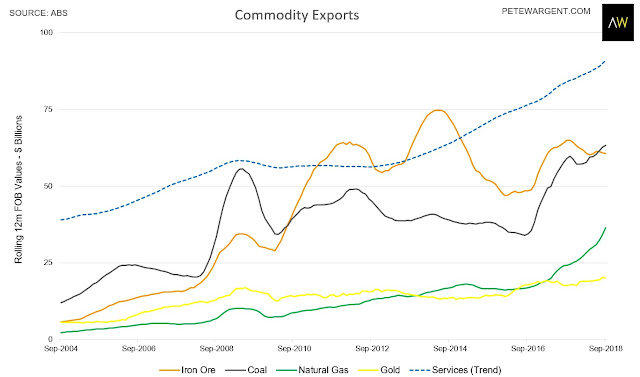 Two years ago the annual value of Australian exports had slumped miserably to ~$320 billion, but with another record month for exports of a seasonally adjusted $37½ billion posted in September that annual figure is now ~$420 billion and rising. 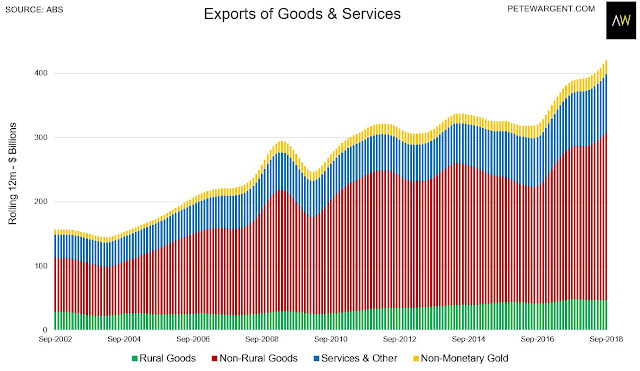 The lower Aussie dollar has helped somewhat, while the value of exports to China is tracking at unprecedented levels, now ballooning to well over $100 billion per annum.


Volumes have been solid, with net exports perhaps adding up to ~0.5 percentage points to growth in the third quarter.

But the contribution to nominal GDP growth could be considerably stronger, perhaps adding ~0.9 percentage points in Q3.

Nominal GDP growth in Australia slumped horribly through 2014 and 2015 leading in turn to sluggish income and wages growth, but these latest figures suggest that nominal GDP growth could now be heading back to where it 'should' be at ~6 per cent.

If sustained then income growth for households should follow.

Does that make monetary policy smart or lucky? Well, better lucky than good as they say!

After a dozen years of trade services deficits, Australia is now on the cusp of posting a services balance in surplus, with much to thank the Chinese and Asian tourism boom for here. 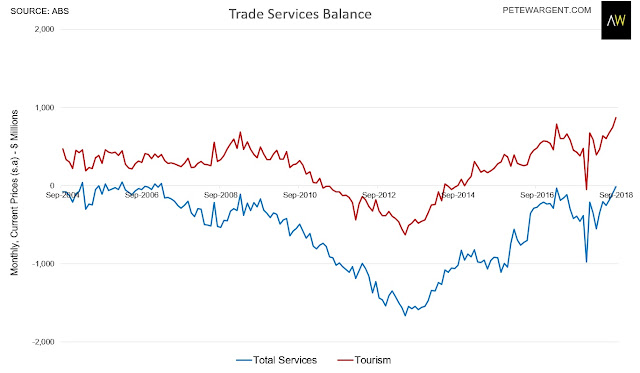 The seasonally adjusted trade surplus for September was a stonking result at more than $3 billion - the third biggest on record - taking the cumulative surplus for the third quarter to a vast $7.3 billion.

The smoother trend figures are plotted below, with every month in 2018 posting a surplus following temporary Cyclone disruption in the Pilbara in 2017. 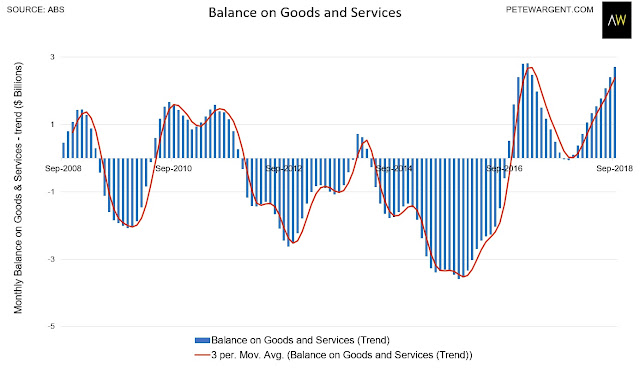 Exports have fired to their highest ever level in September 2018, significantly improving income growth, profits, tax revenues, and the Budget.

In other news, JLL's apartment market report for the quarter noted a dramatic reduction in the supply pipeline in Sydney, Melbourne, and Brisbane, with Brisbane's apartment market now having stabilised after two of years of pain. 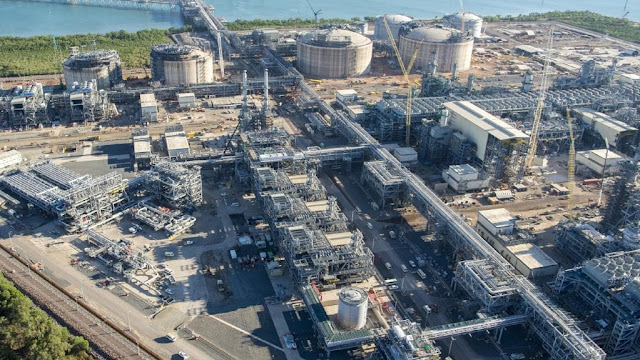