With the new articles getting more shrill by the day on tighter credit, it's becoming more important than ever to watch the facts closely with a clear head!

Following on from yesterday's wage price index, there was a tremendously upbeat employment report today, with full-time jobs leaping by +42,300 in October 2018, described variously as a  'jobs boom' and 'beautiful set of data'.

Stepping away from the monthly noise, this takes annual employment growth back up to 2½ per cent, or +308,100 (there are six charts to expand below). 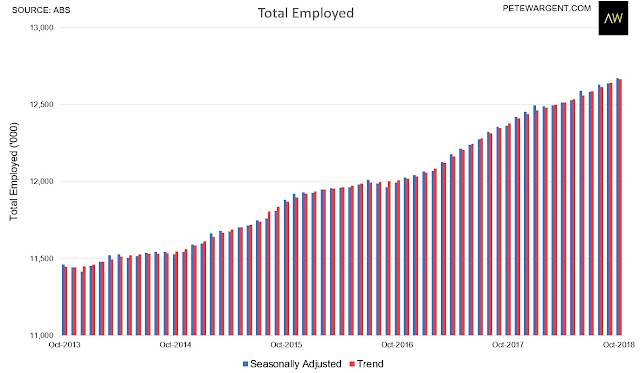 New South Wales again drove the gains in October, with quarterly employment growth for the state booming by +63,100, and annual growth soaring off the charts at +151,000, for a staggering +3.9 per cent annual gain. Wow. 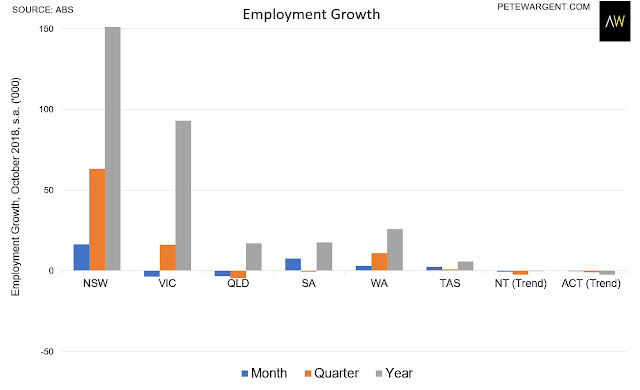 There were also very solid gains for Victoria over the year at +93,100, while at the other end of the scale things have been looking rather messy for the Northern Territory over the past 18 months, with total employment trending ever lower. 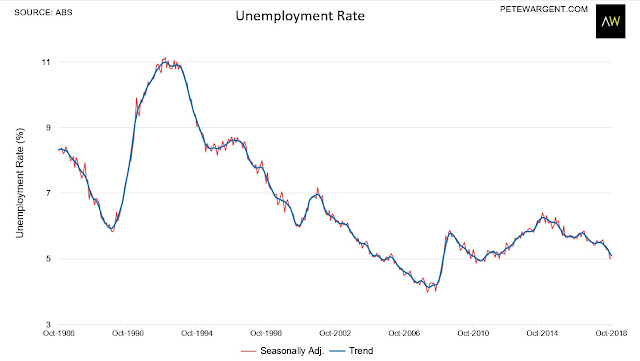 Zooming in the chart to a 5-year timeframe the trend unemployment rate thus continued to fall to hit the lowest level in the 87 long months since July 2011. 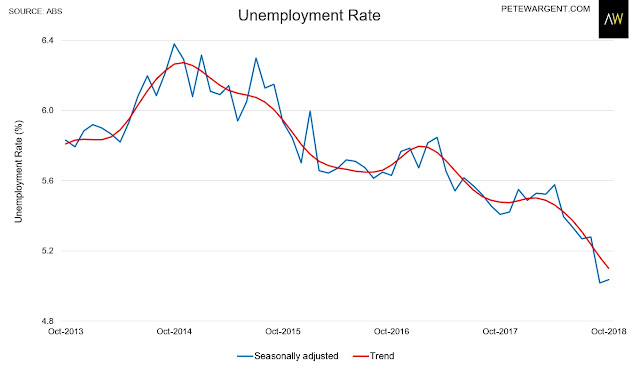 At the state level New South Wales has a seasonally adjusted unemployment rate of just 4.4 per cent, but Victoria has been the real mover and shaker of late with its unemployment rate continuing to dive, now down to 4½ per cent. 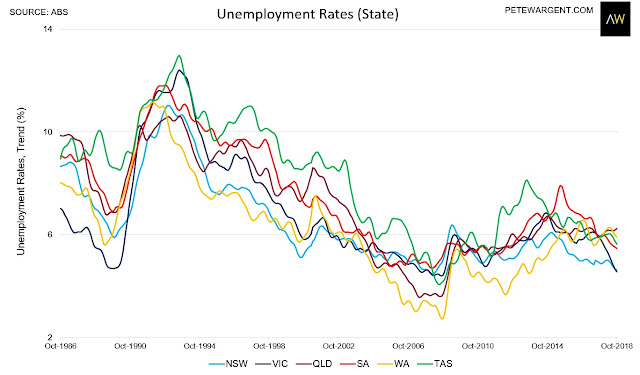 Things look less healthy from an unemployment rate perspective for Queensland and Western Australia, but these states are at least set to be showered with commodity export royalties, which can yet be positive for company profits and wages.

Finally for this chart set the trend number of unemployed persons continued to decline to 680,000, down from 776,000 four years earlier, despite the strong population increase over that time, representing a steady improvement. 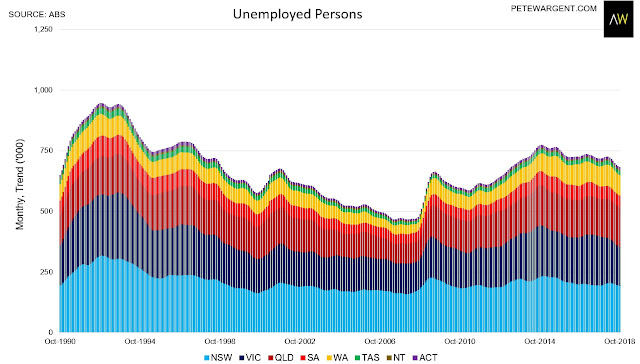 Underemployment was still quite elevated, and hours worked growth over the year was moderate at 2 per cent, but overall this was a fine set of numbers.

The Reserve Bank must undoubtedly be thrilled with this jobs report, and with inflation still only around 1¾ per cent there's no compulsion to move interest rates.

The RBA's Debelle spoke today on macroprudential measures and the housing market, trumpeting the success of these tools in 'reducing the risk profile of household borrowing', while cautioning about the risk of a shock 'from another source'.

There's no way a central bank could or should wade into political issues, but it was hard not to reach the conclusion that policies designed to tighten lending to investors are viewed favourably here (with little need, therefore, for the ALP to pile in with measures designed to reduce demand from investors further).

The bank's latest statistics confirmed that the stock of outstanding interest-only loans had reduced from 40 per cent to 27 per cent - the lowest ever reading from the available records - with no troublesome surge in defaults emerging to date.

There's no doubt that policy has been stunningly effective in turning these trends around, but of course reduced liquidity can itself increase risk, while falling asset prices don't increase household balance sheet resilience either.

Sydney new apartment sales slowed to effectively zip over the third quarter, according to the latest Urbis report.

Median unit prices haven't moved too much in Sydney, but unless something changes there will be some developers facing cashflow 'headwinds'.

Still, an upbeat jobs report for the month of October, and that's always good to see. 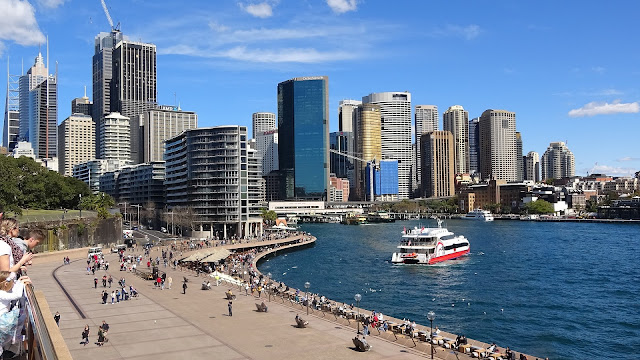