It feels a bit counterintuitive to be writing about misery after a magnificent morning of boogie boarding at Coolum Beach.

However, I flew down to the Melbourne winter for a couple of days this week - enough to make any resident Queenslander miserable! - and looking with a raised eyebrow at the mass consumption in full swing down there and it got me wondering about all the talk of stretched household budgets and the like.

Way back in the 1970s American economist Arthur Okun created his famous misery index, which added the seasonally adjusted unemployment rate to the annual rate of inflation to produce a crude measure of pain for households and economic displeasure for the average voter.

Of course, any such index can't reflect the experience of all households.

And given that inflation rates have been much lower on average since the introduction of inflation targeting the results might always look relatively rosy for the modern household.

With all that in mind I decided to have a bit of a crack at creating a modern Australian equivalent index.

Firstly, we still start with the seasonally unemployment rate.

It's not perfect, not least because the unemployment rate is very much a lagging indicator, and as such may be prone to understating household pain at the beginning of a recession.

I dabbled with the idea of using the underemployment rate instead, but that isn't perfect either - even if you were using the volume measures - and ultimately there is still no better measure for the health of the economy than the rate of unemployment.

So that's the first part of the index.

Then we add the headline inflation rate, also in the spirit of Okun (you could make a case for using a core measure of inflation, which would be hard to argue with).

Given the prevalence of household debt these days, the standard variable mortgage rate (SVR) is then added as a proxy for mortgage serviceability.

You could equally choose to use a ratio measure of mortgage repayments to disposable income to reflect the increased level of household debt, but over the past 20 years the outcome wouldn't be as different as you might think.

And finally the annual nominal growth in the wage price index is subtracted from the above figures, because people tend to be happier about life when they can see that their salary is heading north.

You could make a good argument for instead deducting the annual growth in GDP per capita, but since economic growth over the years ahead is likely to be driven in part by a boom in LNG exports that may not directly benefit households in the short term, I've plucked for wages growth.

Let's take a look at what the revised model spits out...

It's interesting to look at what the chart throws out for the past two decades, keeping in mind that a higher reading is bad, and a lower reading is good.

Firstly there was a horrible increase in the year 2000 which largely related to a nasty spike in inflation after the introduction of the GST became effective on 1 July 2000, with an accordant hike in interest rates. 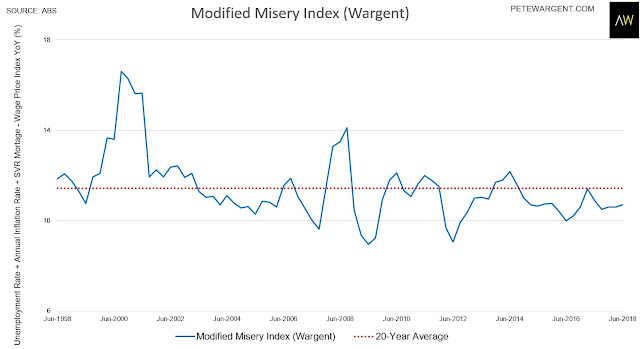 A look back the consumer price index for the September 2000 quarter makes for a bit of gruesome reading with all measures of inflation surging.

Consumer prices eventually cooled, and a few cuts to interest rates got things back on track.

Secondly, there was a spike in the Wargent Misery Index (trademark still pending) in September 2008 as the unemployment rate began to increase, while there was a spike in rents as property investors were spooked out of the housing market by the unfolding global financial crisis.

The Aussie dollar also dropped very sharply at that time from 97 US cents to 62 US cents in a matter of months, with a devaluation of the currency tending to drive inflationary pressures resulting from higher import prices.

One positive observation derived from all this is the adaptability of Australia's open economy, with movements in interest rates, a floating currency, and the flexible labour force generally able to absorb shocks and helping to get things back on an even footing over time.

As for what the index shows today?

The unemployment rate has been falling gradually, inflation remains pretty low in historic terms, and mortgage rates are low too.

The index reading is happier than the 20-year average, then, but has deteriorated a bit over the past 9 months due to a combination of low wages growth and a bit of an increase in things like energy and fuel prices.


The missing piece of the puzzle, clearly, is wages growth.

The wage price index for the June 2018 quarter isn't actually released until next week, so I've used the Bloomberg market median forecast of 2.1 per cent here.

Any prospective upside to wages would clearly be welcomed by both consumers and policymakers!

Last of all, what combination would be required to drive the index to the happiest level ever?

Well, assuming no change in mortgage rates, unemployment gradually getting down to assumed full employment at 5 per cent, and inflation sitting in the middle of the target 2 to 3 per cent band, the  wages growth would have to get quite close to 4 per cent to see a 'best ever' misery index reading.

So, alas, that's not going to happen any time soon! 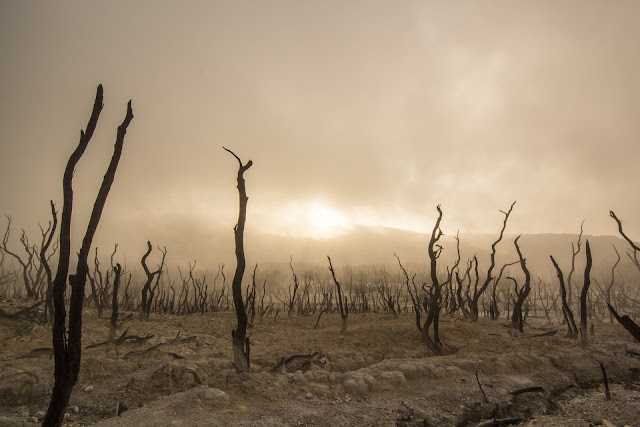