Some months ago I wrote about the prospect of a 'rental crisis' being the next big housing market story (even leading some readers to question my mental health - isn't social media the best?).

Of course, these trends play out over a period of years rather than in tune with today's 24-hours news cycle.

And just as I was lambasted for flagging overbuilding of units in some pockets in 2013 I don't expect much support this time around either.

Despite record dwelling construction through this cycle, rental vacancies have actually fallen over the past year, with only Sydney holding the numbers up as record supply comes online (a huge number of investors bought off the plan in this cycle).

In some markets such as Hobart and a number of regional towns rental vacancies have sunk as close to zero as you'll ever see (there'll always be some frictional vacancies) - and Canberra is heading in that direction - but these episodes may be explained by local factors.

The acid test will be what plays out in Victoria.

And the signs aren't looking good for renters, with the latest REIV figures showing the state's vacancy rate plunging to the lowest level on record. 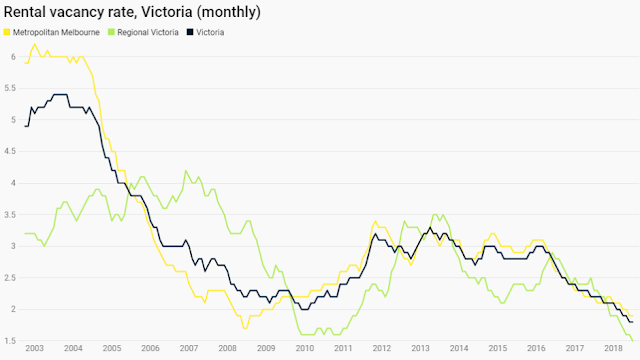 
As Melbourne accelerates towards full employment on the back of a record construction boom, the state is attracting migrants from all over Australia as well as overseas.

The city added more than 125,000 residents over the past year, and will exceed 5 million later today.

This year the city will likely add at least as many residents again.

In the normal course of events the rental market would respond accordingly.

But in this instance Labor is proposing making prospective investment unattractive altogether by quashing negative gearing, which will greatly diminish the availability of affordable rental housing.