12,000 of the 19,000 net interstate migrants hailed from New South Wales, according to the latest ABS estimates.

Annual population growth into Queensland accelerated to +1.7 per cent or +81,300 over the year to September 2017, with Greater Brisbane picking up about 60 to 65 per cent of that growth. 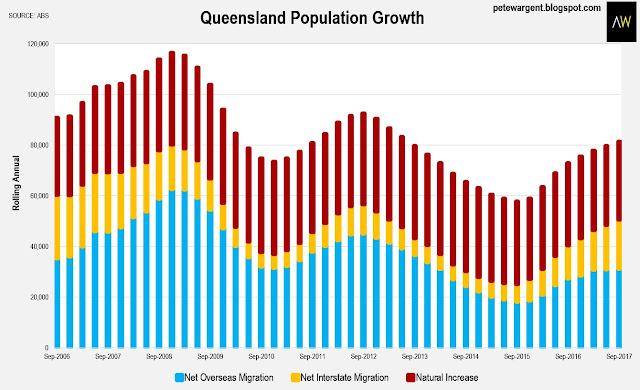 Gold Coast and places such as Caloundra on the Sunshine Coast are also popular destinations.

Some of the fastest population growth in Queensland over the past decade has also been into areas such as Mango Hill, North Lakes, and the Moreton Bay region to the north of the city, Logan-Beaudesert to the south, and Springfield lakes out towards Ipswich.

It wouldn't be a surprise to see Fortitude Valley and the inner city gaining some ground after the Census due to the high volume of apartment completions.

Queensland's estimated resident population is projected to pass 5 million within the next couple of months.