A disappointing result to round out the final quarter of calendar year 2017, with total new private capital expenditure declining by -0.2 per cent in seasonally adjusted terms to $29.6 billion. 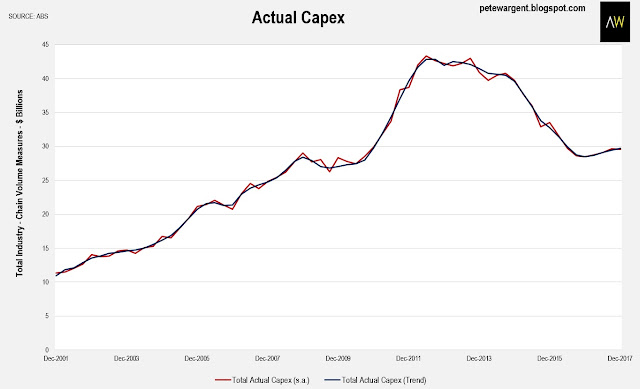 The mining sector has flattered to deceive a little, with capex falling further to sit at $9 billion for the quarter

For the same quarter half a decade ago the amount was $24.3 billion - it's been quite some cycle!

Investment in other industries, mainly services, continued to lift to $18.1 billion, to be about +10 per cent higher than a year earlier.


Hopes of a more robust recovery are pinned on this trend continuing, and there was a lift in expected new expenditure for 2018-19 from the same estimate a year earlier, albeit a modest one. 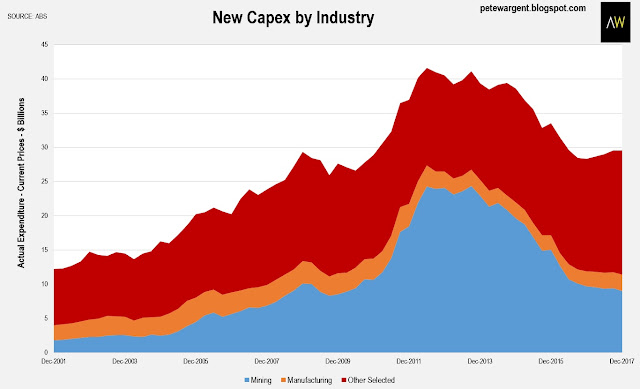 At the state level the drag continues to come from Western Australia, where annual capex has dropped from $64 billion in 2012 to $27.9 billion in 2017. Phew.

Based on these numbers the bottom for WA is still not in, and possibly by quite some margin. 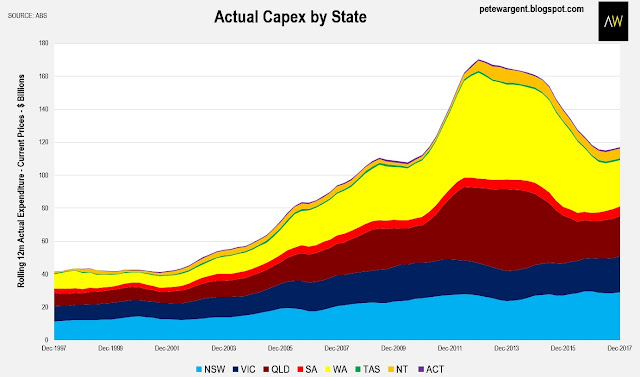 Most of the other states and territories are performing solidly enough.

With the Inpex construction phase now all but complete it appears reasonable to expect that expenditure in the Northern Territory will soon decline from its presently elevated level.

The sort of data release from which you can choose your own narrative, with capital investment rising modestly to be +4 per cent higher than a year earlier.

However, it's hard to get enthused by the first estimate of total capex for 2018-19, especially when the actual quarterly capex was only flat this time around.

'But look at the green shoots!' as Norman Lamont would've said.