Oops, so much for those ruinous household budgets!

In original terms retail turnover tore +6.3 per cent higher in November 2017 following on from solid gains in October, as Black Friday shoppers scooped up bargains and countless discretionary gadgets such as the new iPhone X.

Spending on electrical goods & gadgets leapt +9.3 per cent in the month.

Total retail turnover in seasonally adjusted terms jumped +1.2 per cent to $26.38 billion, comfortably the largest month on record, and likely driven by volumes rather than prices. 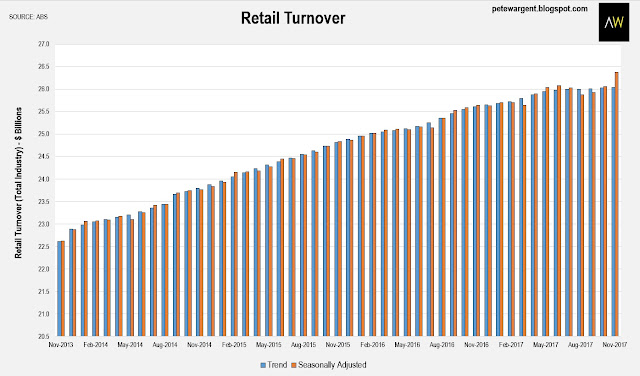 In trend terms annual retail turnover growth remains only moderate, although this largely reflects retailer discounts rather than volumes, and the GDP contribution from consumption in the fourth quarter looks set to be a solid one. 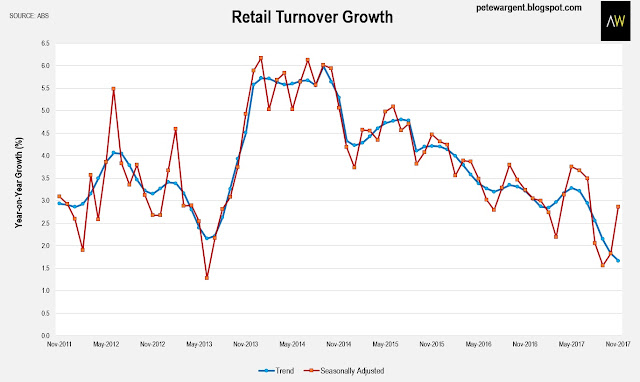 At the industry level there was a thumping +4.5 per cent monthly jump in household goods sales, representing the iPhone effect (there was reportedly a shortage of phones, perhaps leading to a bit of a rush) but there was another horrible-looking decline for department stores.

The reason? A record share of online sales at 5.5 per cent of total turnover, suggesting that the traditional retail department stores face serious headwinds.

The strongest gains over the year were for eating out, representing yet more discretionary expenditure.

Food retailing was unusually flat - presumably people are still eating food, so there may be a bounce here over the next month or two. 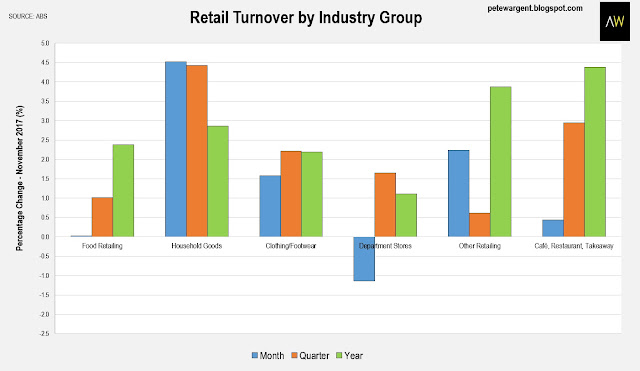 Finally at the state level the monthly surge was largely driven by Melbournites with turnover in Victoria jumping +1.8 per cent, but over the past year South Australia is the surprise leader in percentage terms, at an 8-year high of +6.2 per cent.

There were much stronger results this month almost everywhere but Darwin - the NT capital may well be experiencing a population decline as discouraged or disillusioned workers drift interstate. 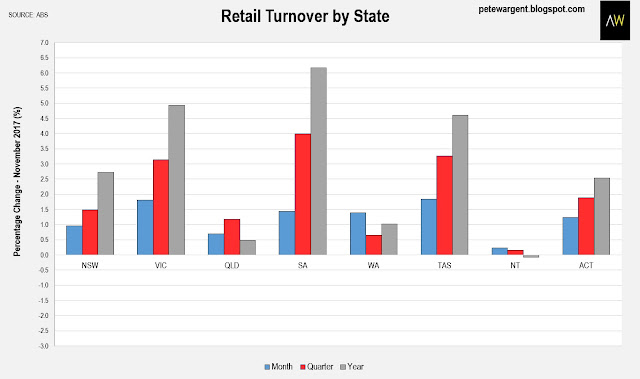 It seems that some consumers may have postponed some spending until Black Friday and the pre-Christmas rush, and looking beyond the seasonal adjustments this was a very positive month for retail.

However, it still looks likely that department store retailers are going to find life very tough as competition from Amazon and others ramps up, but in turn that competition can be good news for consumers.

Moreover, with employers seeking more and more hires, wages growth is now likely to increase over the period ahead. 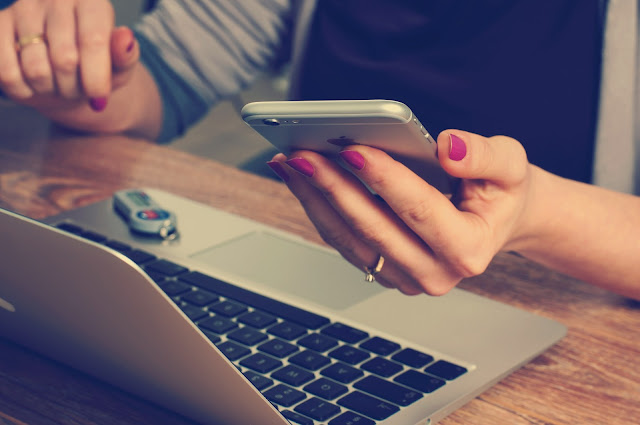