It's been an exciting few years for Australian crane-spotters - as well documented on this blog! - but the peak is now in, at least for the residential sector.

In fact the most active quarter for residential building work done was all the way back in June 2016; it just mightn't feel that way if you live in Sydney.

Looking at the value of work done on new houses, the uplift through this cycle only looks moderately impressive, with a steady contraction underway, broadly since 2015. 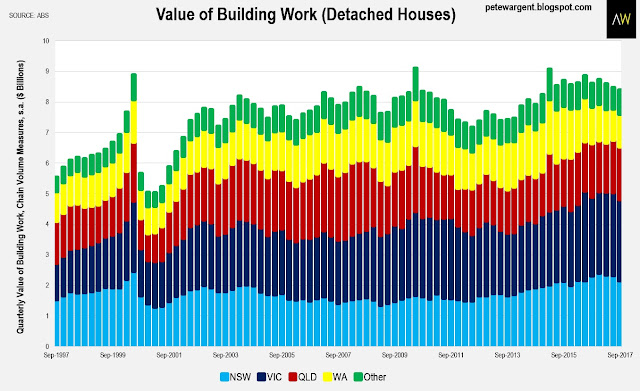 Of course, this cycle has been far more notable for the record building of higher density projects.

This dynamic has helped to address an inherent undersupply of capital city housing, especially in a number of inner suburban areas where land availability had previously been limited.

Crane your neck...the peak is in

Jonathan Kearns from the Reserve Bank of Australia (RBA) noted in a speech this week that attached dwelling approvals have soared from less than half those of detached dwellings under a decade ago, to almost on par across recent years.

The annual number of attached dwellings approved peaked more than a year ago back in the September quarter of 2016, but with longer build times there can be a risk that completions peak just as the residential market turns down.

If it feels as though Sydney developers are still building new townhouses and apartments like the clappers, then this is well borne out by the statistics.

Indeed, New South Wales is propping up the national figures, although even here the peak is probably imminent.

In Victoria, attached building activity levels have been fairly flat now for about 1½ years, while in both Queensland and Western Australia activity has been falling quite significantly throughout 2017. 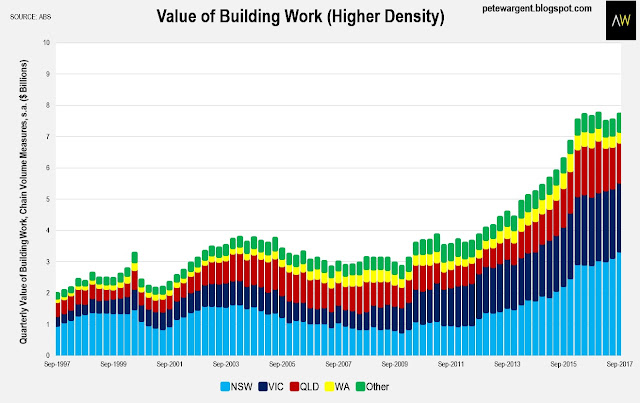 The scale on this chart matches that for detached housing, and shows how Sydney has shifted markedly towards higher density living over the past two decades (while Melbourne has simply seen lots of dwellings built of all types, both in the inner city and on the urban fringe).

Brisbane's dwelling stock historically comprised only a very small share of apartments, but the total stock of attached dwellings has now lifted by more than one-third since 2015, which is remarkable, with completions set to peak this year.

Perth has also seen a strong uplift from a comparatively small stock of existing units.

Despite this, the RBA speech noted that apartments in Perth and Brisbane have witnessed only small median price falls in recent years.

To date there have not been widespread reports of valuations at settlement being lower than off the plan purchase prices, nor has there been a marked increase in settlement failures or arrears.

The RBA also noted that purchases by foreign buyers accounted for just 10 to 15 per cent of new construction (and about a quarter of new apartments), which intuitively feels low, although the share is higher in Sydney and Melbourne. Of these offshore buyers, about ¾ hailed from China.

Although residential building is now turning down, to date the downturn has been only moderate.

Moreover, there is also now a strong pipeline of infrastructure projects, especially in New South Wales, which might help to explain why the reported monthly unemployment rate of only 3.9 per cent for Greater Sydney has not been lower since 2005.