Tourism is still booming, but not just from China

I recently saw another spurt of social media debate about whether Australia is economically speaking 'like Ireland'.

I must confess, I didn't read any of the content - in the two decades since I first came to Oz I've found that reading such bogus international parallels and fighting wars from a dozen years ago has done nothing worthwhile for me (but surely, to each their own!).

Instead, I prefer to look at and interpret the figures myself.

And here's what I note: the Aussie economy is presently growing at about 3½ per cent.

And the economy is expected by the Reserve Bank of Australia (RBA) to grow by another 3¼ per cent next year.

And growth is projected to be another 3 per cent the year after that.

So that's an economy that's growing at about 10 per cent in real terms over three years if the forecasts prove to be anywhere close to the mark.

Now, I've heard all these Armageddon scenarios over the years.

If the turd really did hit the fan - which according to money markets is priced as 'unlikely' - then Australia can cut its own interest rates close to zero, it can engage in its own quantitative easing, and it has its own free-floating currency, which acts as an automatic stabiliser.

Indeed, the Aussie dollar has already turned a neat trick in dropping back to ~71 US cents, which I believe is quietly leading us into a national income boom.

We also have a budget that will be back in surplus in a matter of months (if it's not there already), so we have massive potential firepower in the form of fiscal stimulus if it's ever called upon for any reason.

Another thing which will likely prove to be a furphy is the widely-spruiked massive oversupply of properties, which in my opinion outside a few pockets will prove only to be a temporary state of affairs (with most properties constructed in Australia being pre-sold rather than built speculatively).

The ABS released its latest arrivals and departures figures today, which showed annual permanent and long-term arrivals tearing higher again to 821,660, which is up by 6 per cent from a year earlier, and the highest figure on record.

In Australia, migrants tend to settle in three places: Greater Sydney, Greater Melbourne, and south-east Queensland, in that order.

So factor this chart into those dwelling oversupply calculations. 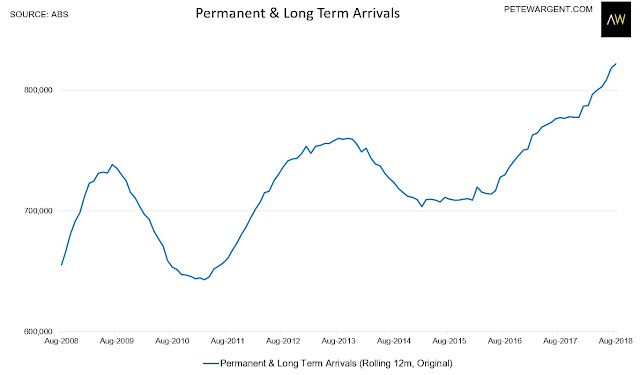 The good news is that both migrants and the incumbent population are finding jobs and unemployment has fallen very low in Sydney and New South Wales, and has recently been falling very fast Victoria and South Australia.

The RBA's Debelle noted in a speech yesterday that job ads figures are losing their relevance because they don't pick up new recruitment websites, internet adverts on LinkedIn or other social media, or on large corporation websites.

According to more reliable business surveys, job vacancies are now at the highest level on record.


The other demographic factor that is property-positive is the epic boom in tourism, with total seasonally adjusted short-term arrivals jumping to a record 794,400 in August 2018, well up from an upwardly-revised 774,100 in July.

Total annual short-term arrivals are at now a record 9.15 million, leading to a surge in Airbnb use and other short-term property portal lets.

Queensland has rediscovered its mojo, with annual arrivals rising at a solid lick to 2 million and tourism having increased since the Commonwealth Games (however you choose to interpret that). 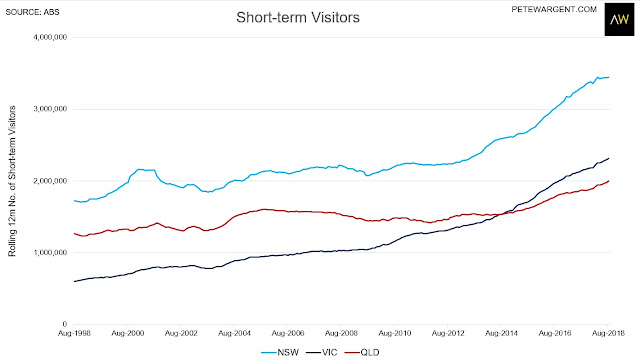 Chinese visitors are now tracking at ~125,000 per month (or ~150,000 per month inclusive of Hong Kong), but the growth in visitors is now coming from other sources, such as India and south-east Asia. 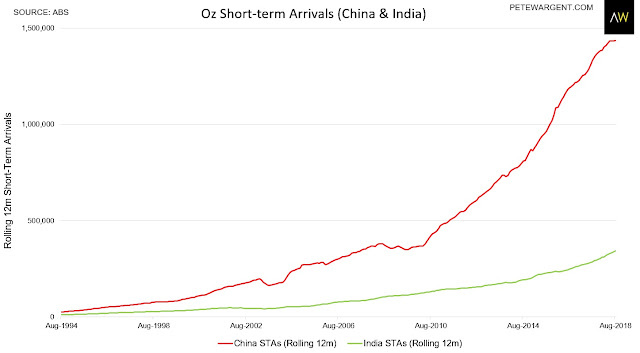 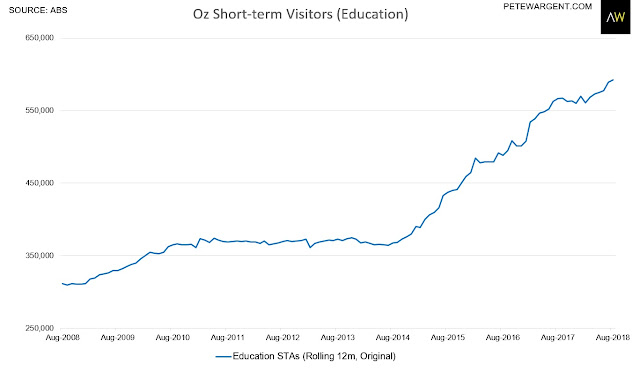 
For all the negativity within Australia, globally it's still seen as a place to be.

And, in fact, this is now proving to be the case more so than ever before, not less.

Of course, it's clear that in some second-rate areas there might be an overhang of undesirable apartments, which you'll get at the peak of a construction cycle.

It's worth remembering that migration into Australia is highly seasonal, and the next busy months won't be until January and February 2019.

But the supply of well-located land remains unchanged.

Henry Sherrell, formerly a policy analyst at the Migration Council and of the Department of Immigration, a Research Officer into Labour Mobility and Migration at the ANU, later of the Lowy Institute, and most recently of the Parliamentary Library - I think that's roughly right, anyway...basically he's written a lot of submissions and knows a LOT about migration trends - out of interest requested an overlay of estimated net overseas migration (which slowed towards the end of 2017) and long-term arrivals (which have blown higher in 2018).

As you can see below, up until the end of 2017 the patterns were very similar. 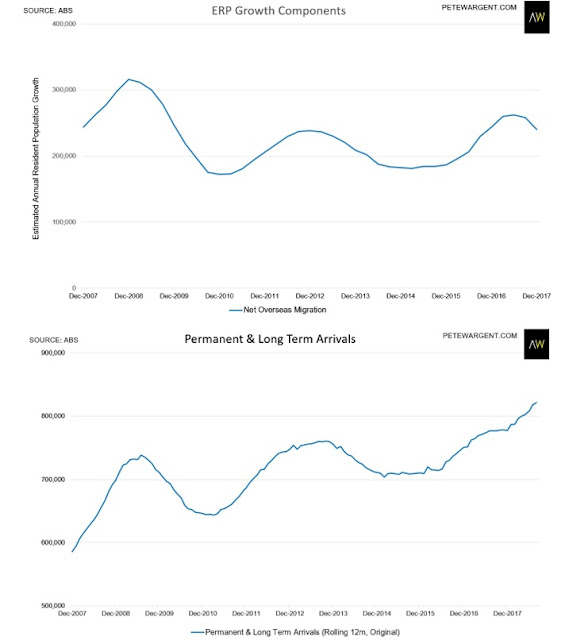 And since the end of 2017 long-term arrivals has taken off.

The net overseas migration figures lag significantly and haven't been released yet beyond March 2018 yet.

My reading of this is that it may imply an acceleration in net overseas migration is happening right now in 2018. 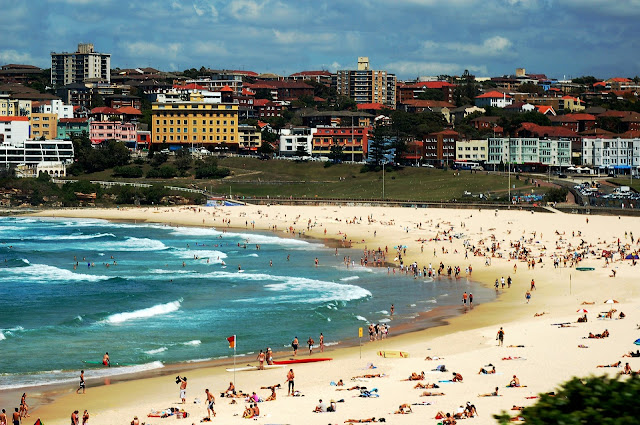