Retail sales were much higher in the month of December 2017, rising by +21.4 per cent to $33.6 billion, following on from a very strong November.

Retail turnover is always higher in December, of course, because of Christmas shopping.

To make sense of the numbers, the national statistician applies a seasonal adjustment.

Comparing December sales to the $33.1 billion in the previous year, turnover was only +1.6 per cent higher.

So that paints a pretty soft picture for retail over the course of 2017.

And so it has been.

In seasonally adjusted terms the -0.5 per cent decline in December wasn't so much of a big deal, given the upwardly revised +1.3 per cent spike in November, which was driven by i-Phone sales and Black Friday. 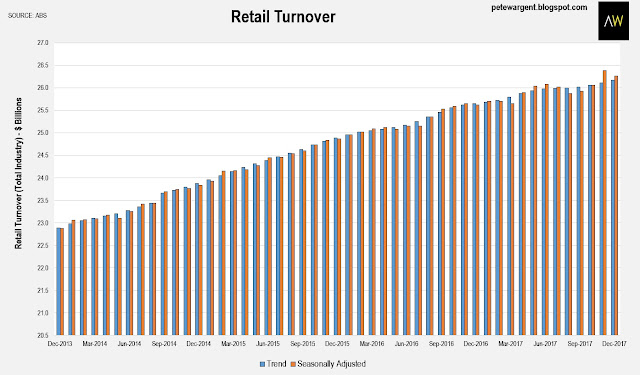 And in fact, in volume terms, retail trade increase by a solid enough +0.9 per cent over the fourth quarter.

Thus, consumption will likely make a decent contribution to GDP in the fourth quarter, although this will be offset by weaker international trade figures.

All I want for Christmas is falling prices

The thing is, as noted by the Reserve Bank of Australia in its Monetary Policy Statement, there is intense competition in the retail sector, and this is driving down prices in some sector and squeezing margins.

And retail deflation continued in the fourth quarter, with prices declining by 0.1 per cent.

This will surely keep interest rates very low this year, and possibly next.

At the industry level household goods saw a major monthly reversal as i-Phone sales reverted - and other retailing followed suit - while the strongest year-on-year growth in turnover was in eating out. 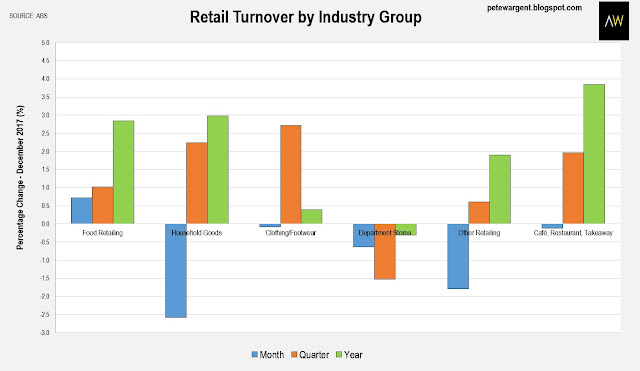 Despite the softer monthly result, electronics retailing was +8.4 per cent higher over the quarter as consumers rushed out to buy the latest gadgets.

Retail deflation continues, which will heap even more pressure on struggling retailers and their lacklustre profits, leading to further underperformance in this stock market sector.

Despite some supply-driven rises in prices, consumer price growth looks to be soft overall.
Posted by Pete Wargent at 13:39