Perth transfers: the only way is up

Australia's total dwelling stock value was pretty much flat in the September quarter 2017, rising only by about $15 billion to at $6.78 trillion, as Sydney's median dwelling price was stopped in its tracks by tighter lending standards.

The number of dwellings now sits just shy of 10 million, while the value of the dwelling stock has in aggregate increased by more than 50 per cent since September 2012. 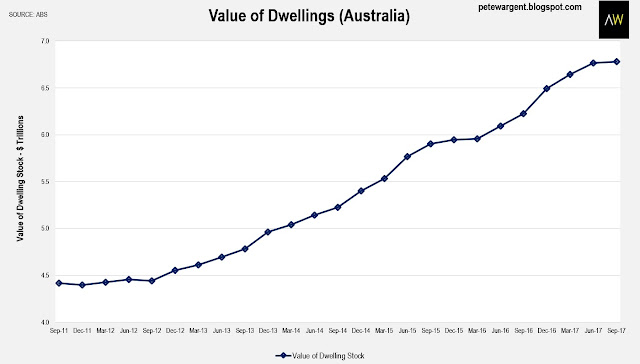 It's worth having a look at where the increase in stock value has happened over that past five-year period.

To some extent stock values at the state level will follow the population growth, largely into Sydney and Melbourne.

But even after accounting for the increase in the number of dwellings, the two most populous states have seen a combination of rising prices and a growing population make them become effectively too big to fail.

Policy makers now cannot afford to ignore housing market corrections in Sydney and Melbourne, for to all intents and purposes these two cities have become Australia's housing market. 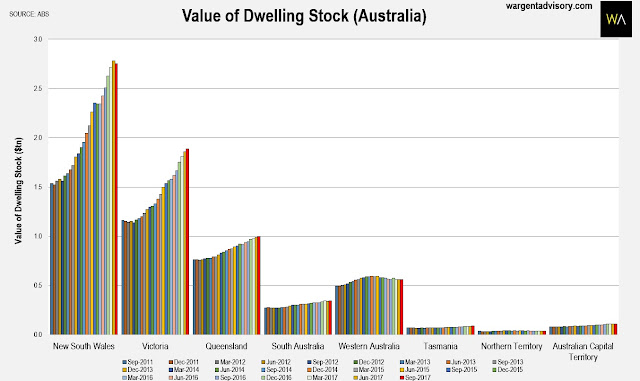 This alone may represent a strong argument for investors and developers playing in the bigger ponds.

Over the past decade Sydney and Melbourne have added a combined 1.75 million people, and - with manufacturing output and now resources construction in decline - are accounting for a disproportionately large share of growth in the economy.

Research by Terry Rawnsley of SGS Economics & Planning showed how growth rates in the regional economies of New South Wales and Victoria are lagging way behind the capital cities, while the growth of the largest capital cities is becoming a self-reinforcing trend.

The available figures detailing the number of dwelling transfers always lag, so it's wise not to put faith in the latest quarter of figures as the preliminary estimates tend to be revised up later.

But rolling the chart back to the June 2017 quarter, it's quite clear that the peak of turnover activity in the attached dwelling market has well and truly passed in Sydney, Melbourne, and Brisbane. 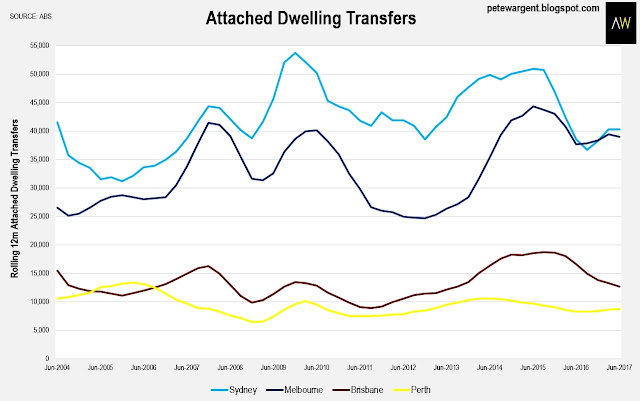 Turnover in the detached house market has tended to be less volatile, though here too there was clear evidence of activity levels being lower than two years ago in Sydney.

Probably the most interesting trend of note was that transaction levels for houses in Perth began to rise again in 2017, with the annual total having dropped by nearly 30 per cent between 2014 and 2016 (while apartment transfers are also rising moderately).

At the national level the housing turnover rate is tracking at about 5 per cent, well below the levels seen before the financial crisis. 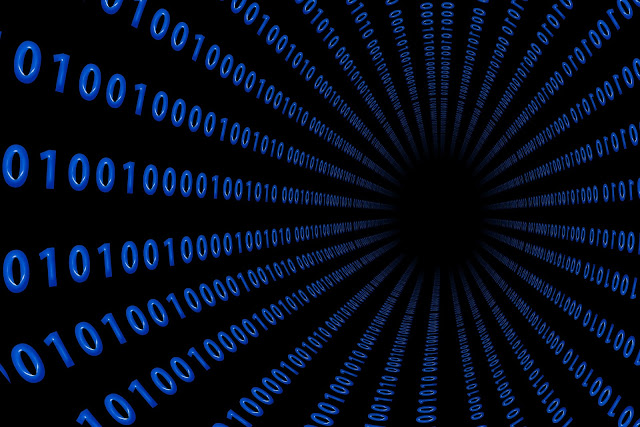