There's an often-aired lament that normally goes something like the following.

Well, doesn't Australia have bugger all to show for its mining boom, even as it enters a 27th year of economic growth? We have way too much dependence on mining and 'digging stuff out of the ground', but paradoxically mining is declining as a share of the economy, and anyway it doesn't generate any profits.

Since the Toyota and Holden closures, Australia doesn't make 'anything' any more, and the entire country is sitting around serving each other cups of coffee, or eating smashed avocado.

The currency is too high, Australia is running current account and budget deficits, household debt is too high, and the banks are at risk of collapse because of half a trillion dollars of "liar loans" on their books (according to an odd survey conclusion at least).

Wages growth has collapsed never to return, mainly because of too much immigration, our luck has run out, future growth can't come from anywhere (because Dutch Disease), and the entire Ponzi scheme is a house of cards economy that's about to sink into a horrible recession, possibly leaving egg all over our collective faces.

Well, what on earth gives?

The RBA's Luci Ellis unleashed her counter-punch in a terrific speech on economic rationalism, 'Where is the growth going to come from?'.

Laying the foundation of her arguments, Ellis first showed that since the floating of the exchange rate in 1983, Australia's manufactured exports increased from about 0.5 per cent of real GDP through the 1970s, to more than quadruple to above 2.5 per cent at the peak. Today, the share remains above 2 per cent (though the contraction would feel sharper if measured in nominal prices).

Australia was once said to be riding on the sheep's back, and indeed back in the 18th century it was believed by some that the only 'virtuous' source of growth in the economy was agriculture. But roll forward to today and that has been replaced by manufacturing. Goods are good, services bad, or so we're supposed to believe.

"Do people genuinely think that it's not really production if you can't drop it on your foot?" questioned Ellis, with a supremely satisfying level of snark.

Now I was born and grew up in a region that was hit hard by heavy industry closures, so I naturally sympathise with the view that the government might've picked winners by propping up Holden or Toyota. Yet technological advances may be crushing the industry, so pivoting away from car manufacturing might prove to be the smarter move over the medium term.

Is immigration really to blame for slower wages growth? Another realistic explanation is that Australia saw a tremendous surge in its terms of trade, seeing wages grow at a rollicking pace along with accelerating immigration, which then slowed as the terms of trade declined again. 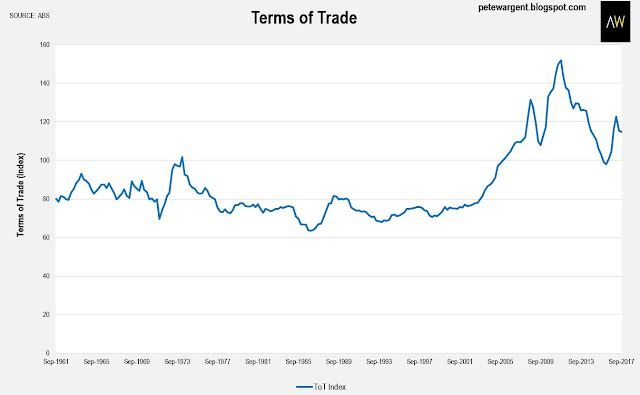 The narrative at the time was that as the ensuing resources construction boom turned to bust, Australia could sink into a recessionary quagmire, and the downturn was surely a big one (the recent spike partly related to the import of a floating LNG platform). 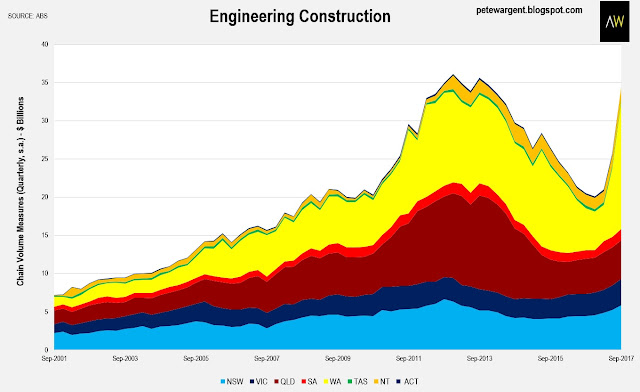 But that downturn started half a decade ago now, so what happened? Dwelling construction helped to plug the hole, with lower interest rates and rising dwelling prices spurring building activity, particularly of apartments. 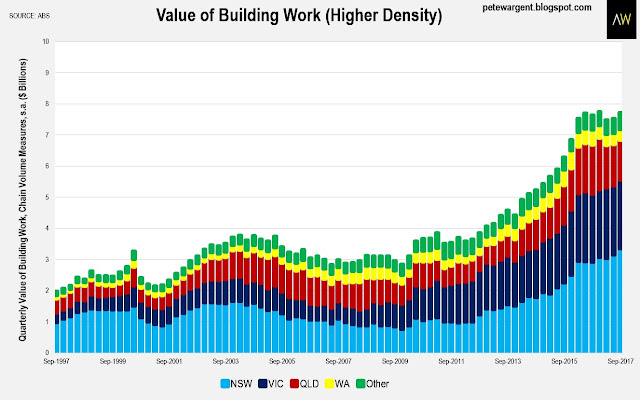 Now the downturn in apartment construction is underway, but it in turn is being replaced by a significant pipeline of public infrastructure, comprising buildings, road, and rail transport projects, that will themselves help to facilitate future growth. And with the dollar declining, the tourism and education industries are already firing.

So, will we run out of ways to grow, and do we need an identifiable external engine of growth? Au contraire, continues Ellis...


The chips are down

Which industries and sectors will future growth come from? Mainly services industries, including all of those sectors which grew more slowly through the resources boom. It's true that mining accounts for a greater share of the economy than 30 years ago, and manufacturing a lesser one. However:

"Around the turn of this century, I remember foreign investors telling me Australia was an ‘old economy’. We should stop digging things out of the ground, they said, and start building microchip factories...considering the relative price movements of iron ore versus microchips since then, we are better off for not having taken that path."

Despite the mining boom meaning that resources account for about half of exports, the mining sector only accounts for a small fraction of employment, at fewer than 220,000 employees. Most Australians do other things, and for that matter most the economic growth comes from other things too. Over the year to September the economy grew by +2.8 per cent, with agriculture the only drag. 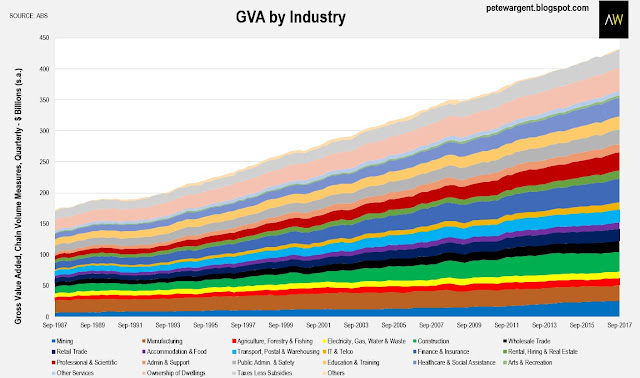 Mining royalties have soared since the beginning of the resources boom. In terms of profitability, a recent surge in coal prices helped to see gross profits in the mining sector rise to the highest on record. Sure, we'd all like those numbers to be even higher, but that's the nature of commodity cycles, and anyway total gross operating profits hit a record $319 billion. 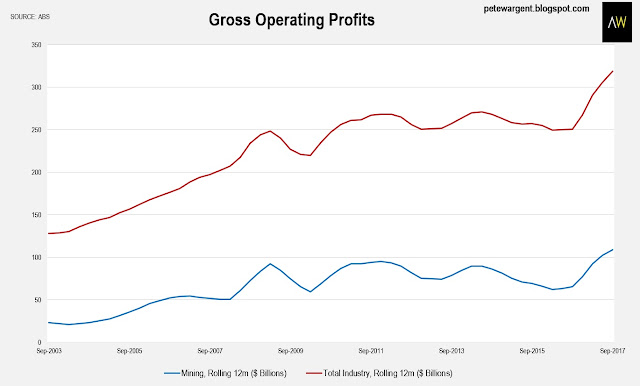 Meanwhile, LNG exports are only just beginning to hit their straps, so this will contribute to growth and profits over the next couple of years too.

As for the deficits, well, a current account surplus isn't necessarily an end goal in itself - Ellis notes with a fixed rate currency we'd have had the stimulus of a balance of payments surplus, but significant inflation and not much to show for it in the end - and in any case the current account deficit is hardly chronic. 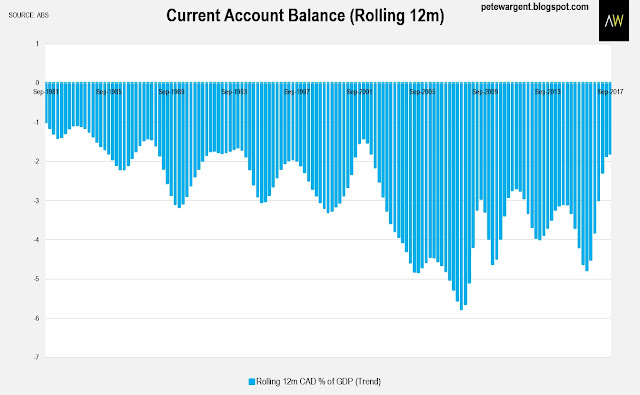 The Federal Budget is projected to remain in deficit for some years to come, with full employment surely the best way to get it back into balance.

Population growth will generate growth. Though new headcount itself doesn't increase living standards, larger denser cities are more productive - with some roles only flourishing with a larger population - while new migrants are on average younger and better qualified than the incumbent population. The interstate migration figures show that the labour market has adjusted to the fortunes of mining.

The participation rate has also been lifting for females and older workers, partly reflective of improved health, but these are once-off adjustments.

The real key to enhancing future growth is productivity, both for start-ups and existing businesses, including the adoption of new technology. Australia has normally been viewed as a fast adopter of technology, but this dynamic has slowed, while the share of research and development expenditure has also declined since the financial crisis, which is far from ideal.

This has been the downside for Australia, we've been less willing to embrace new technology lately, such as cloud computing and the like. But over time other industries will grow, perhaps including robotics, AI, biotech, and more.

Ellis believes that continued growth is more conducive to innovation than a recession: "There is nothing quite like a tight labour market to make firms think about how to do things more efficiently" - so with any luck the RBA will bear that in mind if the present slack persists! Indeed, challenges ranging from wages growth, to the budget, and household debt would seem much brighter with a return to full employment.

Back to the future

Does Australia have nothing to show for its 27 years of growth? It depends on your perspective, I guess. GDP per capita is at all-time highs, living standards are remarkably high both globally and historically speaking (real disposable incomes have all but doubled since the late 1950s), and household wealth per capita is second in the world only to Switzerland.

From time to time I read lists of companies and brands than didn't exist 10 or 20 years ago, which never cease to amaze, and herein lies part of the solution too. With the right political, market, and regulatory environment, future growth and employment will be created and sustained in industries and sectors that can't even be imagined today. Luci Ellis with the last word:

"The next time somebody asks you ‘where’s the growth going to come from?', you can answer: ‘from all of us, trying new things, and gradually getting a bit better at what we do.’ We don't need to wait for something external to make it happen." 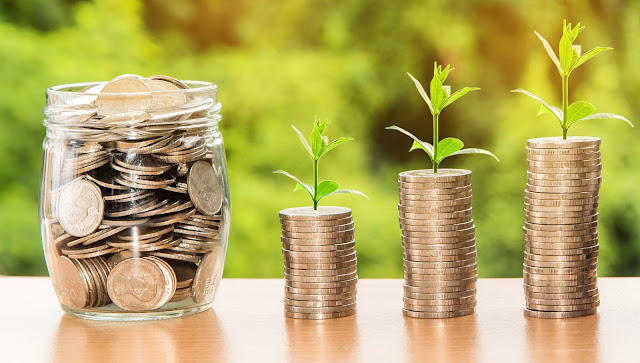