A thousand new jobs per day

Following on from the somewhat tedious "jobs and growth", the Coalition's latest catchphrase is "a thousand new jobs per day!".

In fact, even that bold claim is selling matters short across 2017, with the economy adding a monster +383,100 new jobs on a net basis over the year to November.

That represents huge, near-record annualised jobs growth, with the unbroken run of monthly gains the lengthiest in nearly four decades, and soon threatening to take out the all-time record set almost a quarter of a century go.

What makes that jobs added figure all the remarkable is the horrendous -84,100 jobs lost in the manufacturing sector, with thousands of those coming in the last quarter as Holden and Toyota shut up shop.

Where, then, are all of these jobs being created?

Thus while manufacturing resumes its multi-decade secular decline, healthcare & social assistance and construction between them now account for more than 2.8 million jobs, and education & training more than 1 million more (largely thanks to the 578,000 foreign students now studying in Australia). 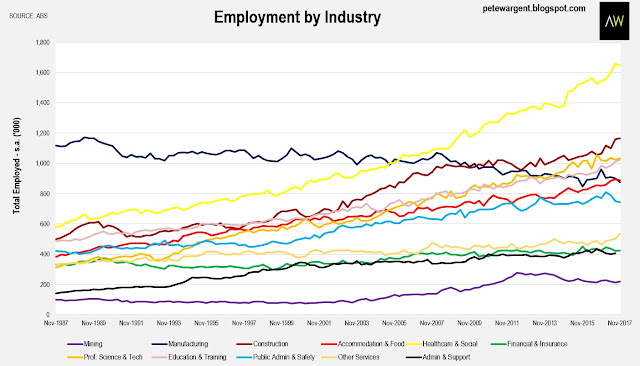 The government's push for road, rail, transport, and other infrastructure projects has paid enormous dividends here, with construction employment soaring to a record 1.165 million or 9.4 per cent of the entire workforce. Massive.

Greater Sydney and Melbourne are creating jobs at an electric pace, with each of the major cities creating more than +88,000 jobs on a net basis over the year to November 2017.

Only one state is creating jobs in its regions at a meaningful rate, being Queensland, while Brisbane too has created tens of thousands of new jobs, at an impressive +52,200 year-on-year. 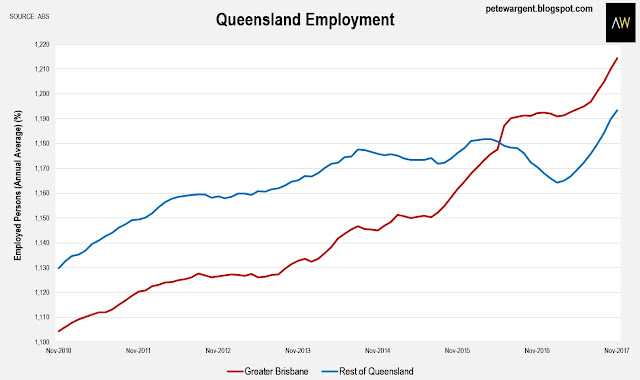 Sydney's unemployment rate continues to fall, recording a rate of just 4.3 per cent in the month of November 2017, once again considerably lower than the 4.9 per cent equivalent result last year.

Full employment beckons for the harbour city, then - Sydney should ignore the carping, and crack on and update those decrepit sports stadia now too, as befits a wannabe global city. 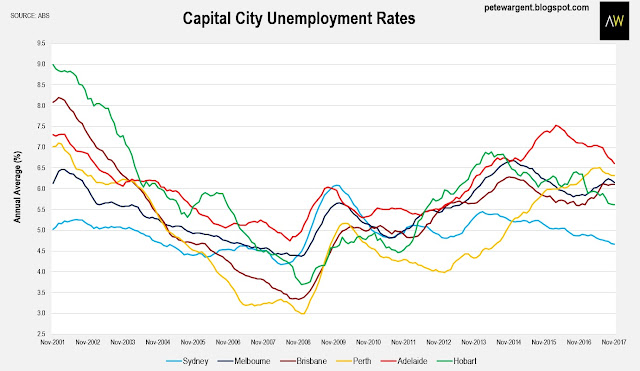 Finally, while there remains a fair bit of slack in the labour force nationally, more importantly when looked at in volume measures terms, we can see conclusive evidence than underutilisation is falling.

In other words, while there may be a million Aussies that want more work (perhaps inevitable given the structural shift to more contracting and part time work?...and unfailingly reported ad nauseam!) the amount more work they actually want has been falling for three years now.

Don't expect anyone in the misery media contingent to report that, though - in reality, most probably wouldn't even know anyway! 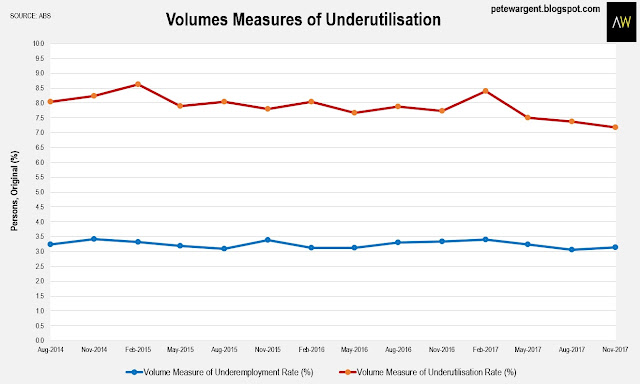 While clearly still higher than desirable, the volume measures of underutilisation are no longer especially high in historical terms - during the mining boom, at the sharp end of the labour shortage in the 2007-8 financial year, the underutilisation rate fell to a fraction under 6 per cent, but that was an anomaly characterised by booming wages growth.

The number of reported unemployed may not have declined all that much last year, but there was a thunderous +2.82 per cent increase in the labour force total, while the participation rate has swelled to its highest level since 2010.

There was an appropriate time for gloomy reporting of the labour force figures. But that was 2014, and all things considered 2017 has been a corker of a year for jobs growth.

With job ads tracking at the highest level in six years, there's probably plenty more good news to come in early 2018 too. Great to see. 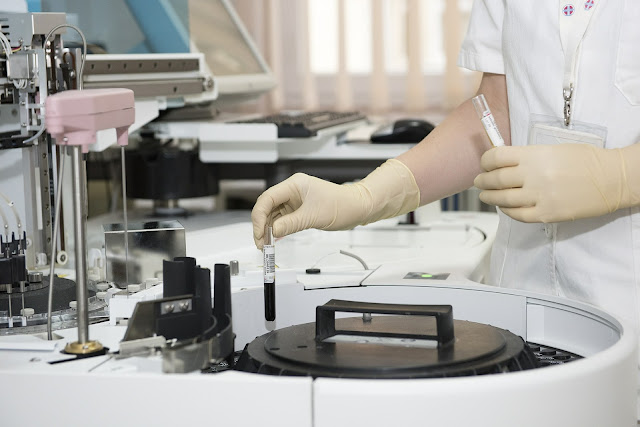