Sydney: stand by for full employment

There has been quite a bit of discussion about Sydney's building boom of late, very little of it highlighting any positives.

Such is life, but here's the plus side for Sydney's economy: New South Wales now has more job vacancies than any state has ever had in Australia's history. 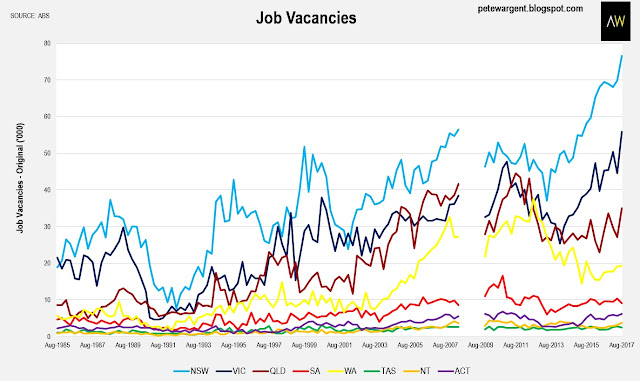 Not all of the newly created jobs are in construction, of course, for such is the reflexive nature and multiplying effect of a population, construction, housing, and employment boom.


Sydney's record stamp duty bonanza is now funding a massive range of infrastructure projects from sports stadia to motorways, and from road and rail links, to water, education, and health projects.

And, unlike in other states, there is little sign of the residential construction boom slowing down too much any time soon, even for apartment building.

The latest demographic statistics showed New South Wales population growth accelerating to +123,300 over the year to March, suggesting that the Greater Sydney population is increasing at a rate of more than +100,000 per annum.

Unlike Melbourne - which is attracting migrants from anywhere and everywhere - Sydney will continue to lose residents interstate, mainly to Queensland, continuing a trend that has been in evidence for decades. 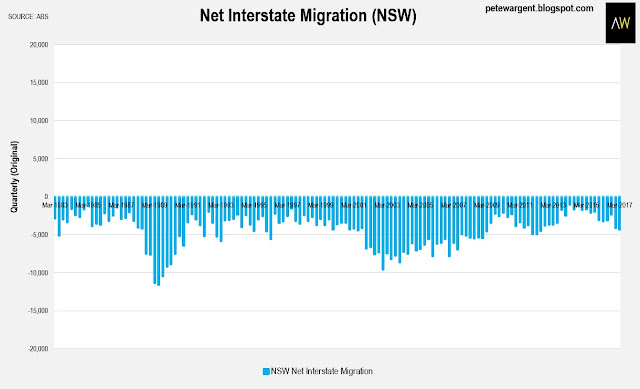 Melbourne's population growth is so rampant that the city's unemployment rate is hovering at a higher level than would be desirable.

In Sydney, though, the unemployment rate has now been falling for several years - with the trend approaching the lowest levels since the financial crisis - and with record jobs vacancies will continue to do so for the foreseeable future, towards 4 per cent. 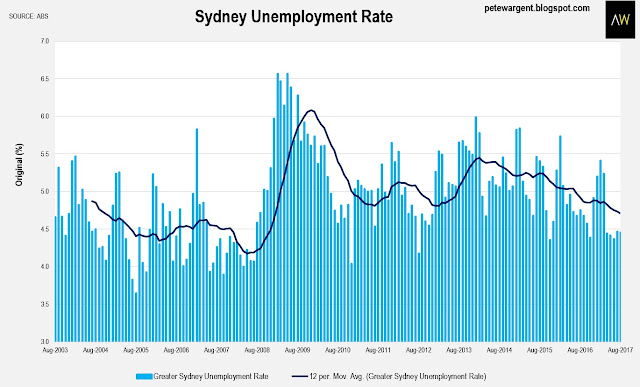 At the last count there were an estimated 121,400 unemployed persons in Greater Sydney, down from 142,700 a couple of years earlier.

That's not quite as many as it might sound, as there will always be some frictional unemployment, would-be employees with obsolete skills, and unfortunately a portion of the workforce will always be unemployable.

However, we do know from previous booms that when the economy is firing on all cylinders, the total number of reported unemployed persons in Sydney can fall below 100,000, and at the current rate of progress, some indicators suggest that we could feasibly see that within the next 18 months.

Full employment can be both cause and effect of some of the most spectacular housing booms, as confidence and wages spiral upwards in a feedback loop.

The unemployment rate is a lagging indicator, however, and full employment does not prevent a house price correction when the cycle turns.

There's a weird fascination in Australia with Ireland's housing market crash - where full employment and a credit bubble saw house prices triple between 2000 and 2006 - although why this one country is singled out for comparison is never quite explained.

Closer to home, both Darwin and Perth saw full employment and housing booms go into reverse gear through the resources boom and beyond.

At least anecdotally, advertised jobs in Sydney have been attracting dozens of applicants in recent years, which has been reflected in modest wages growth as employers hold sway.

The latest figures suggest that the dynamic may be about to change, however.

The number of unemployed persons per vacancy in New South Wales is now as low as we have seen at 2.6.

Although there's a natural tendency for people to assume that if something is happening now then it will continue to happen, the immutable laws of supply and demand suggest that stronger wages growth may well be coming down the line in Sydney.