At the peak of the resources construction boom in the third quarter of calendar year 2012 engineering construction activity peaked at $34.8 billion, yet by the end of 2016 had dropped by some 43.3 per cent to under $20 billion.

This is what some people termed the "mining cliff", essentially the period through which resources projects transitioned from the construction phase through to production.

And through all of that we never really did get all that close to a recession, though admittedly rising private debt levels did help to grease the wheels a bit.

More than four years on, and engineering construction actually began to rise again in early 2017.

Some of this was to do with infrastructure projects - rail, road, and highways - and some was related to ongoing resources investment in existing projects.

Activity rose quite strongly by +2.8 per cent to $20.3 billion in the first quarter.

Engineering work in the public sector was +10.2 per cent higher over the year, while the quarterly rebound was also helped by a +3 per cent rise in private sector activity in Q1. 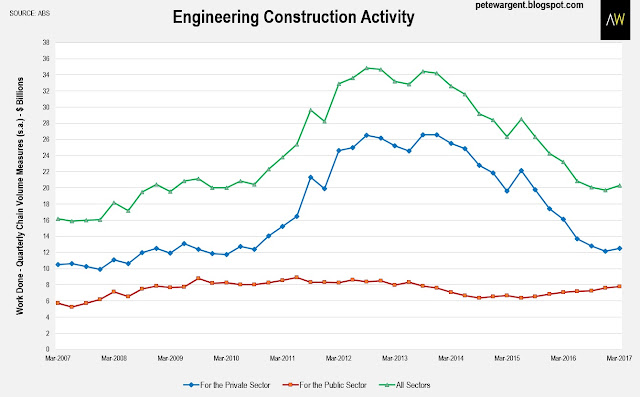 Queensland took most of its medicine back in 2014 as a number of major LNG projects approached the production phase, but the worst has now passed and annual construction activity levels in the Sunshine State have now been rising for four quarters consecutively.

Annual construction activity has also been rising steadily in New South Wales and Victoria since 2015.

At least as importantly, Western Australia is now at last getting pretty close to the nadir, meaning that WA is no longer suffering the chronic declines that have characterised that past three years. 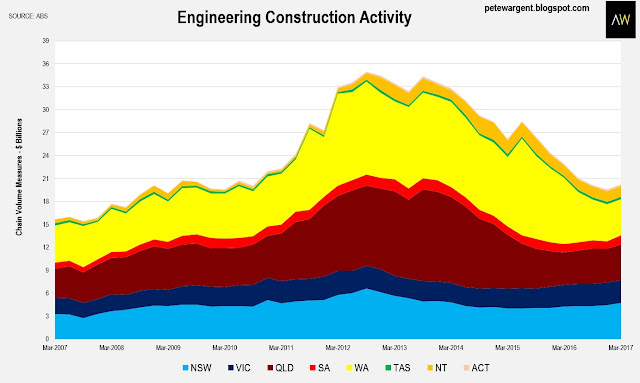 No boom on the horizon, then, but arithmetically speaking this is positive news for the economy, simply because engineering construction is no longer acting as a drag.

The next pressing challenge will be whether construction employment can remain at today's elevated levels through a combination of residential building and infrastructure projects.