Very excited to announce that my first article for MYOB's Pulse is now live.

"If you’re self-employed or own a business, there’s good news on the table if you’re looking to buy a residential or commercial property.

I’m going to deliver the news in a “sandwich”.

Back in the halcyon days when I worked in the accountancy profession, the firm’s Partners advised me that as a manager, I should deliver any bad news to mentees as a so-termed “good news sandwich.”
That is: good news, bad news, good news.
Thankfully today I don’t have too much bad news to deliver, so let’s kick off with some good stuff..."


Read the rest of the article here. 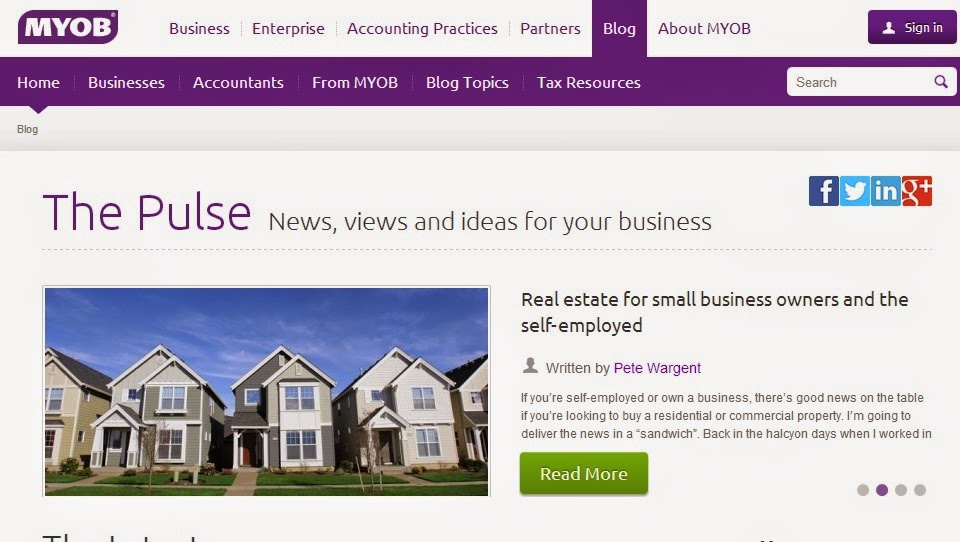 A re-cap on interest rates

We currently have record low interest rates in Australia, with an official cash rate at the stimulatory level of 2.50% (click chart). 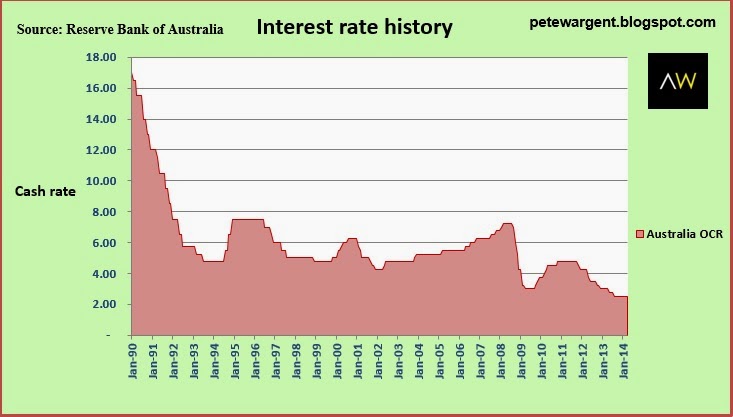 The problem with a low cash rate which stays there for a prolonged period is that it can take the real interest rate (i.e. after inflation) too low, and this can ultimately lead to an overshoot in GDP growth, and thus to high inflation.

This is very important to note this week when the CPI data is released.

I don't expect that it will be the likely outcome, but what happens if inflation rises further still on last quarter's high print?

Well, if the Reserve Bank holds the cash rate low while inflation rises, then the real interest rate falls even lower, aggregate demand will become more stimulated and then the inflation genie will be well and truly out of the bottle.

Of course, the converse can also be true at various stages in the interest rate cycle.

If the Reserve Bank pegs the interest rate at too high a level, then the real interest rate will also be high, a GDP gap will open up and inflation will begin to fall.

And if the bank refuses to drop interest rates as inflation falls, then the real interest rate goes higher, and this leads to trouble.

Why? Because the GDP gap gets wider, inflation falls further and the real interest rate goes yet higher still.

Then the entire economy falls into a deflationary tailspin...

The moral of the story is this: whether inflation is climbing higher or falling lower, if the central bank stubbornly refuses to adjust its interest rates in response, the results will ultimately be destructive to the economy.

What is a "neutral rate"?


A neutral interest rate might be defined as one which is neither stimulatory nor tightening.

As we have an inflation-targeting central bank, the neutral rate should be one which keeps core inflation in the desired 2-3% range.

The neutral interest rate must take into account all factors which affect economic demand, such as the strength of the Aussie dollar, current fiscal policy, levels of debt and how consumers would respond to changes in the cash rate.

How to calculate the neutral rate

Can a neutral rate of interest be calculated?

The basic approach would be to use an econometric model to solve an equation for a neutral rate, but since each macroeconomic model will differ from the next, we would necessarily end up with a range of answers.

Probably, we'd opt to discard the outlier (or outliers) and take an average of the remaining results, but on balance you'd have to say that the neutral rate of interest is best thought of as a concept or a range of rates rather than any one specific number.

Why today's neutral rate is lower

The Reserve Bank previously gave guidance which suggested that a neutral rate of interest would be around 5.50% or perhaps a touch higher, which is considerably more elevated than today's cash rate of just 2.50%.

However, with the proviso that there must be an element of intuition employed, I'd estimate that today that number for a neutral rate would be in the 3.75%-4.25% range.

Partly because of the strong Australian dollar which can artificially cause lower growth.

Partly because household debt levels are higher than they used to be, and thus each movement or adjustment in the cash rate is likely to affect consumer intentions more than was the case in times past.

Another factor still is that bank lending spreads have increased again.

Last week, citing similar points Commonwealth Bank's Adam Donaldson noted that he believed that a neutral cash rate today would only be only 3.50%, being just 100 bps higher than where it sits today.

For what it's worth, here is what futures markets are currently pricing in for forthcoming rate movements, which is to say, not very much for the next year, and then potentially a rate hike or two (click chart):

How long this state of affairs lasts depends on the strength of the economic recovery, how high the dollar stays and on bank funding costs, but the likely answer could be a long time...perhaps even for the next decade.

Naturally following on from this, if we have lower interest rates than we had in decades past then on average you can expect to see assets trading at higher multiples too.

Naturally there are some risks to this view, most notably if the US economy recovers more strongly than expected and US interest rates start to revert to higher levels and away from the rock bottom levels they have been in recent years.
Posted by Pete Wargent at 20:39