Net dwelling completions increased by 9 per cent to 34,359 across the year to October 2016, up from 31,388 a year earlier, according to NSW Government data.

While this is an improved result - and Greater Sydney has been completing dwellings at its fastest absolute pace in a decade and a half - the rate of addition to supply was still struggling to keep pace with surging demand.

In the month of June alone some 4893 units and apartments were completed adding to the widely held perception of a supply glut - including some significant projects in Rockdale, Hurstville, Strathfield, and the Hills District - but there have been a number of other considerably slower months.

It's worth noting that the net dwelling completions figures cover a truly vast urban area stretching from Bondi to the Blueys, and from Wyong to the 'Gong.

If you're not familiar with Sydney geography, this means the coverage area stretches a long distance north of the harbour city to include the Central Coast, and a long way to the south to cover Wollongong and the Illawarra, as well as out to the national park in the west.

In short, 34,359 new dwellings in a year still isn't going to cut it, particularly in the context of so many preceding years of under-building, and a greater completions rate still will be needed to bridge the supply gap (click on the charts to expand them). 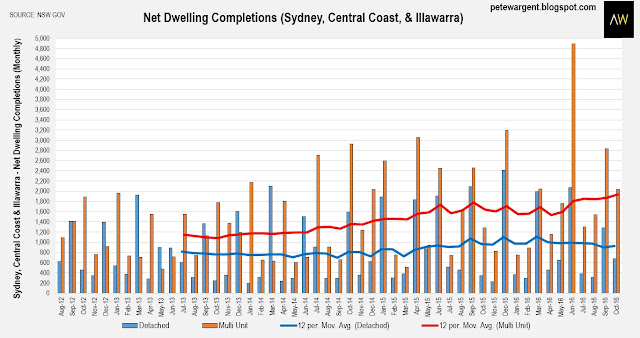 The main reason for this is simply increased population growth.


While New South Wales population growth was ticking along happily enough at +79,800 in FY2012, it then suddenly exploded to well over +100,000 per annum in FY2013 and has been maintaining this impressive run rate ever since.

However, offsetting this there were also sharp drops in a number of key LGAs such as the City of Sydney itself, Ryde, and Liverpool. 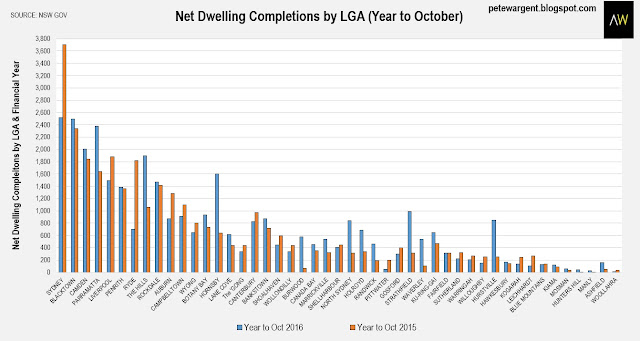 While net dwelling completions have still been too undercooked to make any noticeable difference to Sydney's property market rocket to date, this is partly due to the elongated construction times for multi-unit projects.

There is still much work in the pipeline, and as we shall see below, approvals have touched record highs in 2016.

There were some 64,457 dwelling approvals over the year to October 2016 according to the NSW Government, so the potential to bridge the supply gap definitely exists, even if it takes time to play out. 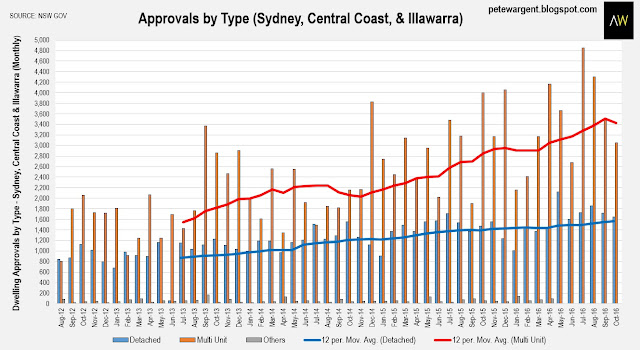 In terms of the LGAs at the greatest peril of oversupply, for mine Parramatta and Blacktown are clear standouts.

Meanwhile the Hills District is seeing plenty of construction activity, while there is also such potential in Liverpool, Camden and Campbelltown, Ryde, Penrith, Hornsby, Auburn, and Rockdale, among other places. 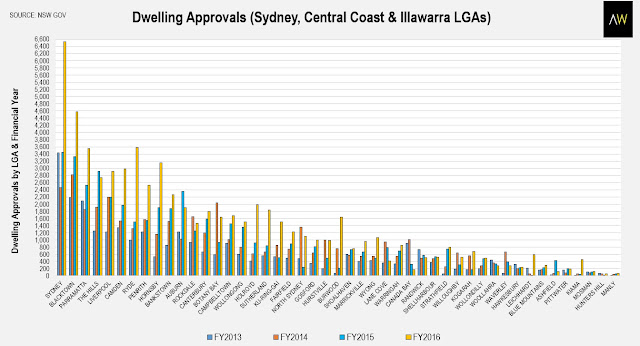 At the other end of the scale, almost nothing of note is being added to supply in upmarket Waverley or Woollahra in the east, or in Manly or Mosman to the north, which is pretty much as you'd expect really.
Posted by Pete Wargent at 03:03