Aussie stock markets have been quite the dog over the last decade, no doubt.

But that's not true elsewhere in the world, where rock bottom interest rates and unconventional monetary policy have seen stock indexes at record highs.

US stock markets understandably attract most of the attention.

But today it was the turn of the FTSE 100 to rise to a record close, only a matter of months after it was predicted that the EU or 'Brexit' referendum would lead to a crash. 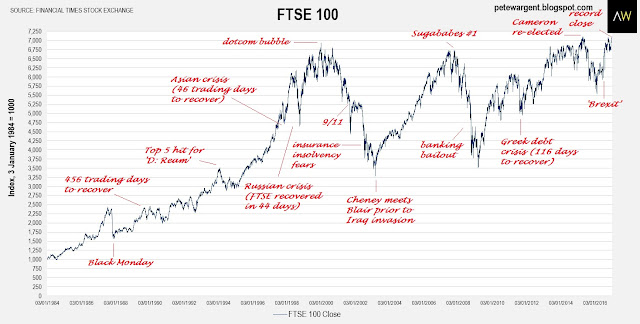 This is a nightmare for investors actively seeking value or aiming to pick individual stocks.

Although stock valuations have clearly been higher before, today's valuations are still very expensive, with earnings likely to come under pressure as real wages growth starts to kick in, and gearing levels high enough to cause pain as interest rates rise.

Real wages have declined considerably in the UK over recent years, but real wages growth seems likely to return with the unemployment rate declining to just 4.8 per cent.

It's largely become a game of guessing where markets go next based upon central bank stimulus measures rather than investing in the conventional sense.

When the end comes it probably won't be very pretty, mainly because the stretched valuations are not really being supported by strong levels of economic activity.

Overall, low market volatility may be lulling investors into a false sense of security, and history shows that when the correction comes it may well be swift and brutal.

Unfortunately too many investors will decide to chase recent gains by piling into stocks at this late stage in the cycle and will end up wearing losses.
Posted by Pete Wargent at 06:43