A lot has been made about a first homebuyer 'strike' over recent years, but the NAB survey and others have shown that often young people are choosing investment property as their first step onto the ladder.

As such, the share of the market comprising first time buyers hasn't really changed all that much.

Mentioned far more rarely (or more like never) is that with most people doing things later in life than used to be the case, relatively speaking there just haven't been that many people in the key age bracket to buy their first home either.

This is especially so given that the average first timer is likely to be in their thirties these days, at least in the main capital cities.

This trough in Australia's demographic waves might have been one of the more convincing parts of the bear case for the housing markets in recent years, but in the end policy makers opted to sidestep the potential wipeout by cutting interest rates to record lows.

It largely worked by drawing more investors into the froth rather than through pulling forward demand.

In surfing terminology we've been in a demographic trough for a long period, but it seems that the swell is now beginning to build.

It's probably not for a few years yet that the number of persons in the 31 to 40 age bracket reaches a critical mass that might be considered compelling.

Yet the demographic statistics figures for the quarter ended June 2016 showed that finally things are beginning to move in that direction, with a significant 2 per cent leap in this cohort during the financial year.

Between now and 2026 the number of persons in this age bracket is projected to swell dramatically.

Looked at graphically, you can see the trough in the 31 to 40 age bracket becoming emphatic over the last decade.

However, the red line shows that the housing market is just beginning reaping the benefits of the ramped up immigration programme (which is tilted heavily towards immigrants aged under 30). 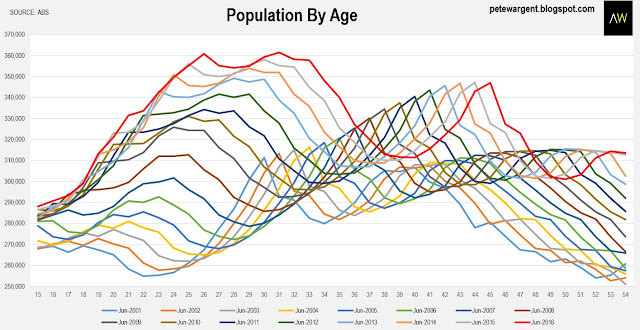 Looked at another way, after mostly treading water for years the number of 31 to 40 year old residents jumped by more than 118,000 in the last 24 months, with hundreds of thousands more to come in a demographic wave between now and 2026. 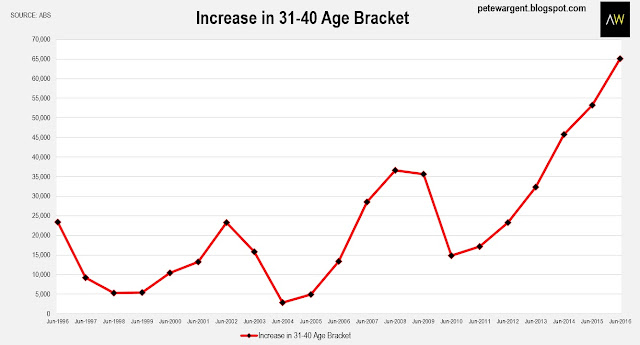 This is important because although individual choices differ and trends shift over time, in aggregate people tend to do quite predictable things at fairly predictable stages in their lives.


Variations around the traps

The bureau's figures showed that although Australia's population is expected to age in a similar way to other developed nations due to a combination of longer life expectancy and lower fertility rates, the immigration programme helped to keep the median age steady at 37 years over the 2016 financial year.

What is clear from analysing the figures, however, is that the states and cities with stronger economies and employment prospects generally have more a favourable demographic outlook than those with rising or elevated unemployment rates.

For example, Tasmania's median age has spiked sharply from 35 to 42 years over the last two decades, as younger adults have chosen the path of interstate migration to the mainland in search of gainful employment.

The picture is quite mixed around the states and cities, but projections show that over the next decade there will be more than three quarters of a million extra persons in the 31 to 40 age bracket, a huge demographic wave to drive new entrants into the housing markets.

That's not to say other cohorts won't expand too - in fact, the total population is projected to expand by a record 4.4 million over the next decade to 28.5 million - but the number of potential new entrants may possibly be the most important driver of demand.

For some reason it's only just dawning on people how population growth will impact traffic congestion in the largest cities.

As a result of this the next big run on housing markets is likely to be towards certain inner suburban locations with transport links at the expense of outer suburbia where infrastructure and jobs are sparse.
Posted by Pete Wargent at 05:23