With the proliferation of part time jobs in 2016, it's perhaps not surprising that the notion of monthly hours worked being the most reliable measure of labour market strength has garnered a groundswell of support.

Firstly, the measure has proven to be quite a useful indicator of periods of economic weakness, such as in the early 1980s recession, the "recession we have to have" of 1990-1, the early 2000s recession, and the global financial crisis.

The chart below shows that while Australia might have dodged a technical recession through 2009, businesses and employees were grappling with recession-like conditions for some time. 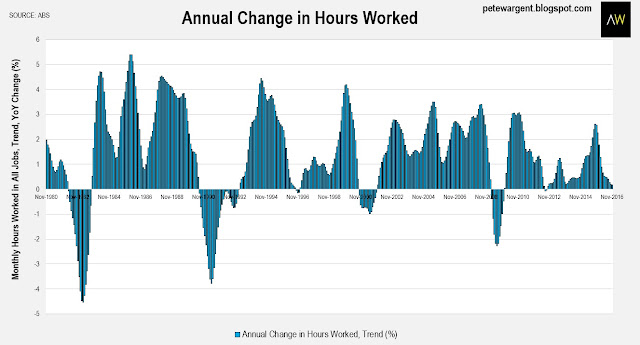 In the final quarter of 2015 the annual change in hours worked was shaping upwards nicely, but now annual growth has all but ground to a halt.

There's a possibility that the survey overstated the strength of the labour market last year and has understated it this year, but whichever way you look at it the present environment is soft Australia's now works through the final year of the resources investment downturn.

Only Victoria is scoring well on this measure at the moment, with Melbourne actually scoring quite strongly on a number of metrics right now. 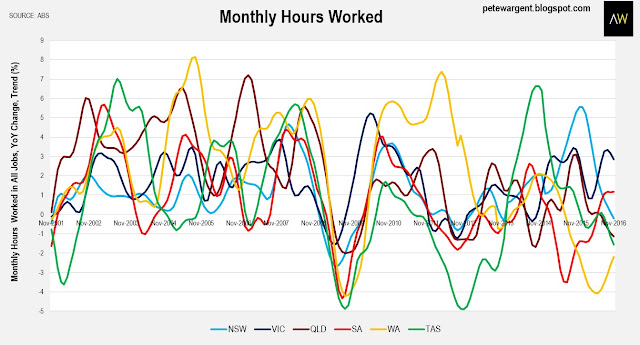 It's also worth looking at the same figures in trend terms over time too.

Looking at the figures charted this way, you'd be hard pressed to describe conditions in New South Wales as soft with monthly hours worked essentially as high as they've ever been after a huge surge in 2015. 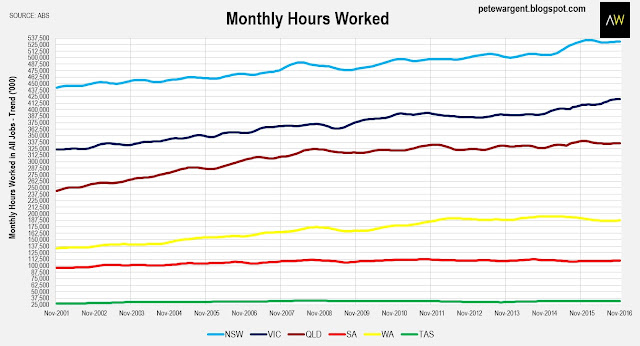 Some good news for Western Australia is that monthly hours worked appear to be flattening out somewhat, having declined quite sharply in trend terms since March 2015.
Posted by Pete Wargent at 01:41