Having declined by fully two thirds from the March 2012 quarter peak, mineral exploration expenditure (ex-petroleum) increased by 0.6 per cent in Q3 2016. 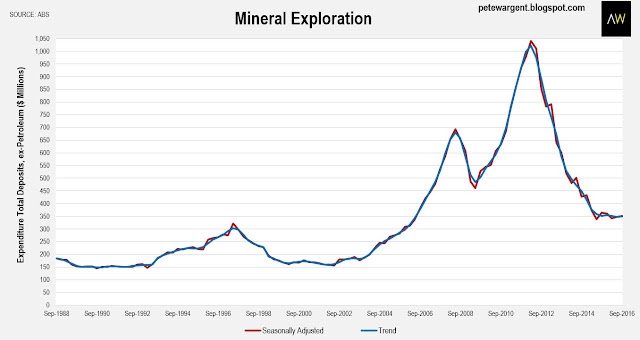 This is some welcome good news for Western Australia, being the state that has born the brunt of the decline, with exploration spend trending up for 12 months in WA and the state notching a 1.9 per cent increase in expenditure in the third quarter of the calendar year. 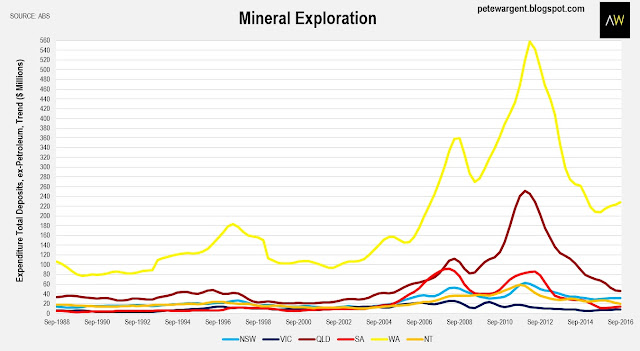 Although it's tempting to believe that the reason for the rebound must be the spiralling price of coal and to a lesser extent iron ore in 2016, in reality it was exploration in the WA goldifelds that drove the rebound. 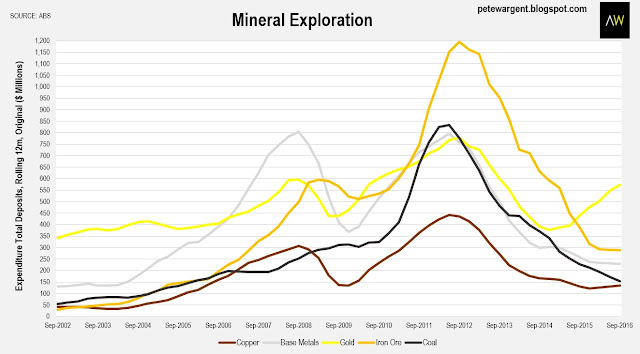 The statistics for metres drilled show that the recent improvement was driven by new rather than existing deposits, with commitments having been made earlier in the year to expand the program at Australia's largest undeveloped gold deposit to the east of Kalgoorlie and Laverton, the Yamarna Belt.

Coal exploration did jump significantly in the September quarter, but truthfully the numbers are volatile and in rolling annual terms total expenditure for the mineral remains well down.

If mineral exploration is going to hold up or improve then it will need to be driven by (a) the Adani Carmichael project getting up, and (b) iron ore drilling programs ramping up to maintain production volumes as existing reserves are depleted.
Posted by Pete Wargent at 09:21