All roads - and flights - lead to Melbourne

I took a look here recently at some of the key national and state level migration trends.

We already know that most immigrants to Australia head for sunny Sydney and increasingly for Melbourne, but what about internal migration trends?

I've tried to capture a few of the main trends in the infographic below (click to expand). 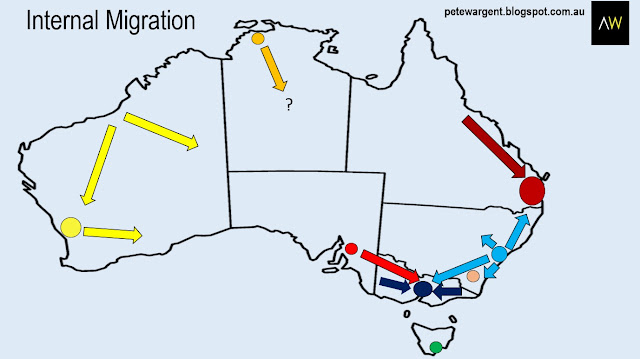 In short, at the moment, all roads and flights increasingly seem to be leading to Melbourne!

Let's start in the densely populated south eastern corner of the country.

We know that from the state level figures charted below that Sydney typically loses residents interstate, but there is also a steady movement outwards into regional New South Wales.

And after a lull interstate migration from NSW is now starting to happen again, with Sydneysiders typically heading for south-east Queensland.

Mainly they head to Brisbane, but also to the Gold Coast and Sunshine Coast, coastal locations that are attracting more than their fair share of regional Queenslanders too.

Some Sydneysiders are now even heading for Melbourne, for work, for relatively cheaper housing, and for the perceived sophistication of the lifestyle (lol). 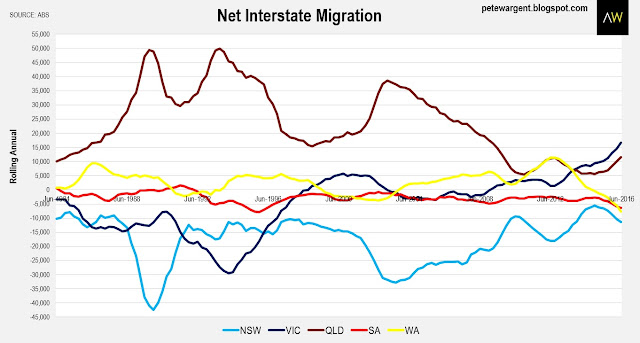 Unusually for Australia, Sydney also loses residents to regional centres within its own state.

There is even an observable internal shift within Sydney itself from locations such as Canterbury, Ashfield, Fairfield, and Strathfield-Burwood in the inner west and inner south west respectively, as folks seek more affordable housing options (Parramatta) or more space (Sutherland Shire).

In turn, Parramatta and the Shire lose internal population flows too, with Sydney's peri-urban regional centres often the beneficiaries.

With immigrants more than plugging the holes left by departing Sydneysiders, the net result is that Sydney has a population comprising largely of foreign born residents, and residents with foreign born parents.

Indeed, the share of all Australians born overseas has now reached its highest level since the 1800s at close to 30 per cent.

A second notable trend is the shift from west to east.

Tasmania has previously suffered from losing its working age population to the mainland, resulting in the median age spiking nastily from 35 to 42 over the past two decades, but net interstate migration from Tasmania turned positive at the beginning of 2016, albeit marginally.

The most interesting change since the peak of the mining boom has been the marked about-face in Western Australian net interstate migration, from dramatically positive to negative.

There had already been a strong migration away from the Western Australian outback as the resources construction boom transitioned to the production phase.

But now residents of Perth are sensing the economic winds of change and in turn are making the long trip across the Nullarbor too.

A few of my Perth friends have upped sticks and moved to the nation's capital Canberra, but statistically more will end up heading for Melbourne.

The latest figures also showed that South Australia is losing residents at a pace not seen in more than two decades, with the net interstate depletion totalling 1873 in the June quarter alone, concerning figures for Adelaide and the regions of the state.

Brisbane and south-east Queensland (essentially Gold Coast and Sunshine Coast) are evidently improving in the migration stakes, with over half of internal migrants to Brisbane coming from 'rest of Queensland' locations, a point often missed by observers.

With Sydney losing residents internally as it always does, however, there can be no doubt that overall Melbourne has by far and away earned the title of Australia's population lynchpin in recent times.

Not only is Melbourne attracting residents from overseas, from Adelaide, Perth, and now even Sydney, the Victorian capital is also a magnet for attracting the population of the state's regional centres, where population growth has all but stalled, exclusive of Geelong.

Much of the population growth in Melbourne from internal migration occurs on the fringes, fanning out around the compass on the outskirts of the city in places like Wyndham, Whittlesea-Wallan, Casey-South, and Melton-Bacchus Marsh.

This suggests that the relative affordability of Melbourne's fringe estates is acting as a comparative advantage over Sydney, where even in Western Sydney's working class outer suburbs house prices have exploded higher.

The west of Melbourne experiences the highest net migration gain of all of Australia, with this area encompassing the fastest growing suburbs in Melbourne such as Tarneit, Truganina, Point Cook, and Laverton.

There is internal migration away from some established areas too, such as Dandenong in the south east, and closer in at Brimbank in the west.

Overall, though, Melbourne is acting as a magnet for both overseas settlers and internal migrants, and as such is well set to shatter all population growth records in 2017.