A bit of a cheat as there are still 10 days to go, but let's take a quick 10-second squiz at what is happening in property markets as 2016 draws to a close (not a whole lot happens between now and the new year anyway).

In Melbourne, meanwhile, home values increased by +13.2 per cent. 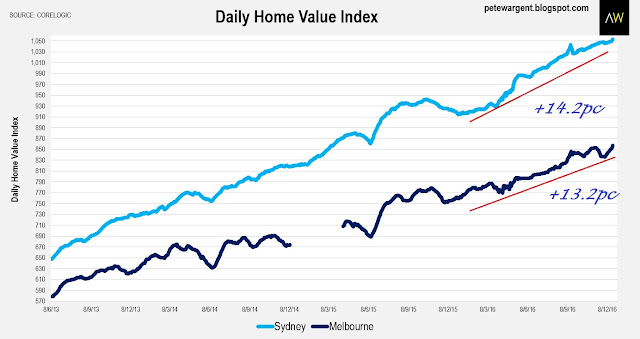 Not much more to say about that except that there have been some seriously bad forecasts in recent years!

In Melbourne, there have been reports from Charter Keck Cramer research that Melbourne apartment construction has been set to "go slow", with apartments to be brought to market more slowly next year than previous forecasts had suggested.

This is generally good news for the Melbourne apartment market, widely thought to be facing an oversupply of apartments.

Of course, you could look at the coming slowdown in apartment construction in one of two ways.

Either you could see this as the market correcting itself, with supply rationally adjusting to the risk of oversupply.

Or you could see it as a panic reaction from fearful developers, foreshadowing an inevitable meltdown in the new apartment market.

Whether you believe the former or the latter will almost certainly be based upon what you thought at the beginning of 2016, because these market dynamics have been known about for a long time, and because it's human nature to seek out evidence which supports our opinions.

Cognitive dissonance is the state of having inconsistent thoughts where we 'spin' or reframe evidence to fit our beliefs, rather than updating our beliefs in light of the new evidence.

We like to believe that we mould our beliefs to fit the evidence, as this would obviously be the rational thing to do - but human nature often simply does not allow us to do it. Why? Largely because we don't like to be proven wrong, for it challenges us too much!

Being unable to change your views when the outlook changes can be a dangerous trait in business and investing.

There is no simple way to measure exactly what financial markets think about the new apartment markets and any related systemic risk.

Genworth Mortgage Insurance Australia (ASX: GMA) is a monoline mortgage insurer operating in Australia and its share price action might possibly be the best proxy we have for monitoring mortgage arrears and default risk.

The GMA share price is up by a whopping +29.1 per cent year-on-year despite a huge drop in gross written premium (stock levels have been well down this year, and macroprudential measures curbed the investor market in 4Q15).

Clearly the market doesn't appear to be too perturbed about default risk, although the recent surge may in part reflect good cheer for the company's renewal of its contract with CBA.

The 3Q16 investor presentation showed that delinquency rates are somewhat higher as at 30 September 2016 from a year earlier, up to 0.47 per cent from 0.39 per cent, driven by Western Australia which saw delinquencies leap by some 24 basis points to 0.69 per cent.

The resources regions of Western Australia and Queensland in particular face some serious challenges.

That said, delinquency developments by book year have been generally favourable since 2009, with a bit of a spike following the Queensland floods of 2011.

Delinquencies are predictably lowest in New South Wales at 0.32 per cent, and Victoria at 0.39 per cent, with dwelling prices in a sustained growth cycle. 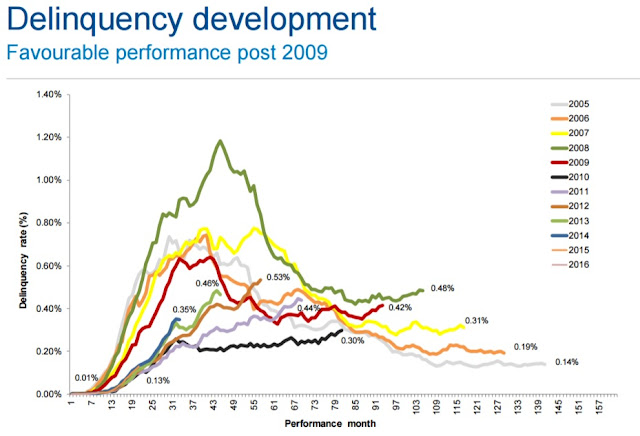