Slowest NZ migration since May 2015

New Zealand has a good deal in common with Australia in terms of its migration patterns.

Having pushed record migration, the economy has lately been weaker with an estimated 85 per cent of milk producing farmers projected to be loss making in the face of weak dairy prices.

As such in the normal course of events it would be extremely difficult to see enough employment created to sustain the boom.

Thanks to a surge in international students, however, particularly from India, migration has continued to track at historically high levels (New Zealand classifies students as "migrants" if they intend to stay in the country for at least months).

And according to Westpac the number of student arrivals has now tailed off, having experienced a "sharp decline, and this looks to have continued this month".

While the weakest migration result in 10 months may have been exacerbated by the Easter break, it has still been a very strong run for New Zealand migration, with the rolling annual total just about clinging on to a record high for the 20th month in a row at 67,600.

New Zealand experienced a seasonally adjusted net gain of 100 migrants from Australia, the 12th month in a row this figure has been positive, although this number has also now fallen from its peak.


The greatest number of permanent and long term migrants over the year to March continued to come from Australia at 25,800 - to a fair extent comprising Kiwis returning home - the annual total stone dead flat from February at 25,800 (and up marginally from 25,700 in January). 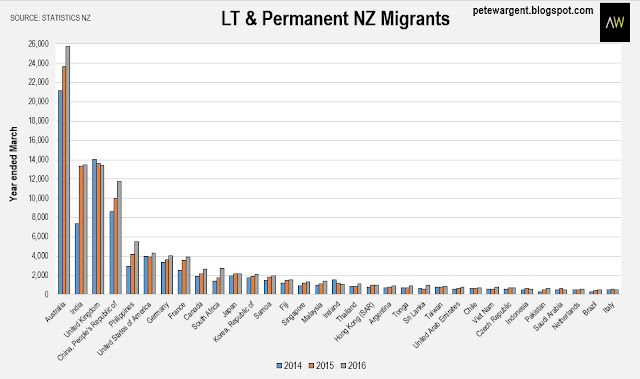 More than half of arrivals stated on their arrivals card that they would reside in Auckland, the capital city focus for migrants representing another trend which mirrors Australia.

Annual visitors to New Zealand hit a record 3.26 million, driven by Asian tourism, which is yet another trend held in common with Australia.

There has also been a huge increase in annual arrivals from China, largely from Beijing, Shanghai, and Zhejiang, up by 82,300 to 377,800.

Migration to New Zealand remains at historically high levels for now, thanks to international student arrivals, but appears to be slowing in sympathy with the softening economy.

From Australia's perspective whether or not there is a net gain or net loss of 100 persons per month across the Tasman won't make any tangible difference to our economy.

Many of the drivers and effects will be a mirror image of those experienced in New Zealand, including international students, and hugely strong capital city population growth.
Posted by Pete Wargent at 07:10