Record dwelling starts in 2015 - but peak has passed

Stacks of news out at the moment, so let's see how quickly we can summarise the Construction Activity and Building Activity figures for the final quarter of 2015.

And of course few bodies cop more heat than the Reserve Bank of Australia (RBA), with almost everybody having an opinion on what they should or should not be doing.

From mines to houses

Yet perhaps some credit where it is due here!

The RBA had stated a desire to "hand off" from a mining construction boom to an up-cycle in residential building, and yesterday's Construction Activity figures showed how this has been achieved.

By the end of 2015 engineering construction had declined by close to a third from its 2012 peak, and unhelpfully non-residential building went backwards last year too.

Fortunately, as measured below in seasonally adjusted Chain Volume Measures terms, total quarterly residential building activity including major renovations surged to its highest ever level at more than $15 billion. 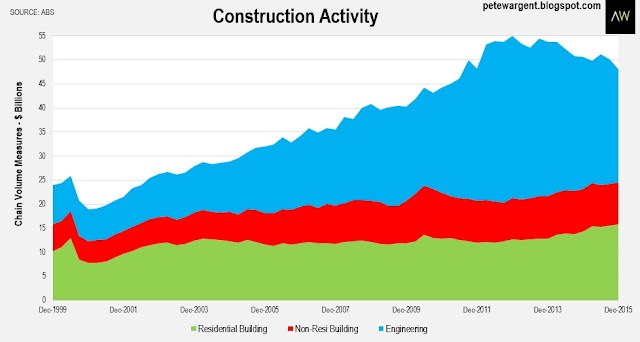 As a result, with well the mining construction three-and-a-half years past its peak, the economy is still ticking along in reasonably good shape.

There are more trends and sub-trends in the Building Activity figures than can reasonably be considered in one article, but most notably we can see than 2015 was the greatest ever year for housing starts, with about 220,000 dwellings getting underway for construction.

A record high total of attached dwellings  was commenced in 2015 - units, apartments and townhouses - with around 106,000 commencements falling into this category.

That said, the total number of dwelling commencements declined by more than 5 per cent in the December quarter, and when considering all indicators it seems reasonable to conclude that the peak for housing starts has now passed. 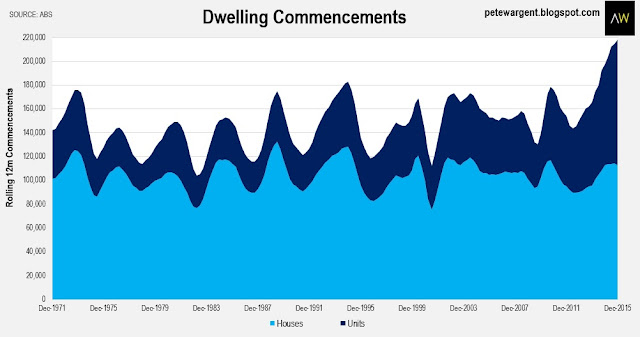 As long as three years ago I noted the potential for apartment oversupply in some pockets through this cycle, a point that is now widely recognised.

However there are a few factors which could now support a contrarian view that the "high rise glut" may not prove to have the impact feared (at least at the macro level - at the local level new apartment markets will suffer declines, as is their way).

One of these factors is that it can simply take so long for high-density dwelling approvals to become actual completed units, up to several years in some cases. As such, higher density supply on brownfield sites is not as responsive as new houses on shovel ready greenfield land. 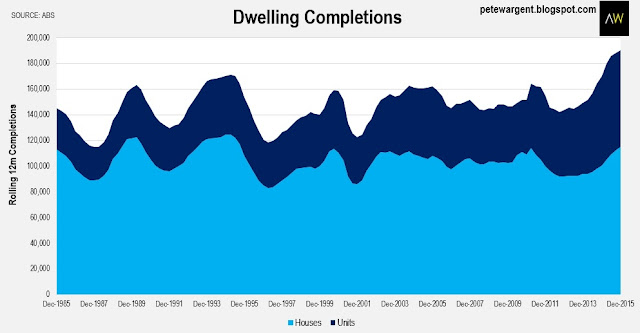 Other considerations covered here previously include the increasingly rapid intake of international students to the largest capital cities, and that with more than half of the new dwelling stock effectively financed by offshore investors a good deal of the new apartments may have little discernible impact on the local rental market.

The risks are evidently higher in some states than others.

For example, while New South Wales commencements dipped to 13,914 in the fourth quarter, in Victoria - the undisputed king of housing construction - dwelling unit starts surged to a record high of 17,420.

Melbourne has fewer constraints on dwelling construction (which may be just as well, given the enormous rate of population growth in the Victorian capital), and as such Victoria commenced more than 69,000 new dwellings in calendar year 2015, easily eclipsing the 59,000 seen in New South Wales.

Well over half over Victoria's commencements were attached dwellings, which points to a risk area.

Nimbly moving on to completions, then.

Detached house completions have increased in most states through this cycle, if not very significantly in the case of New South Wales (well, there isn't much space in Sydney anywhere near the city), with Victoria also comfortably leading the way on this metric. 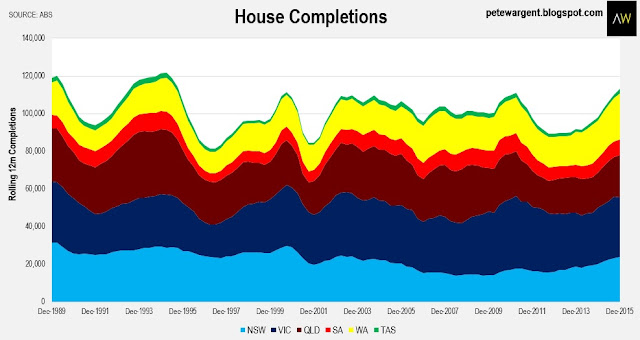 Looking at attached dwelling completions the rolling annual total has declined a little after a huge lift, with Victoria (25,400) and New South Wales (21,700) ticking back a little following a softer couple of quarters. 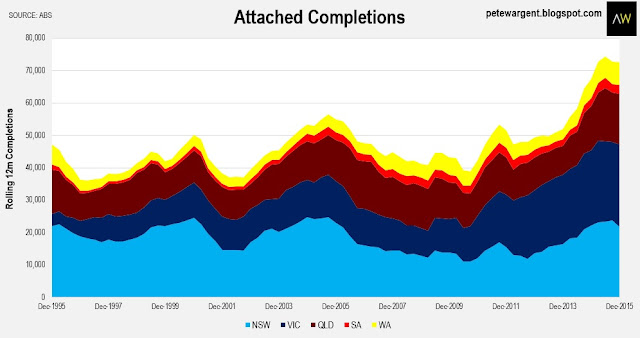 This partly relates to the lag effect of high density units, which can take a long time to build. But it also reflects that the number of dwellings recorded as "approvals" but that have never been commenced have surged to their highest level on record at more than 36,000. Half of these are located in New South Wales. 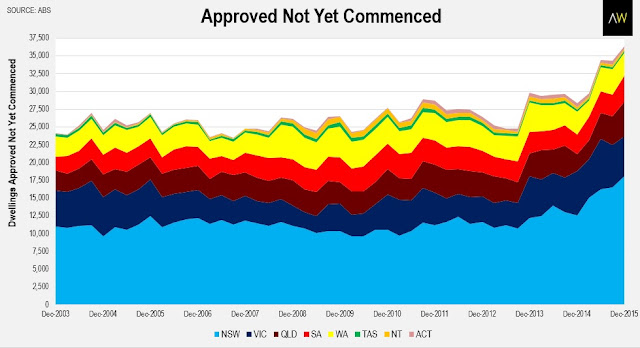 
A record building boom and dwelling commencements helped to keep the economy growing about 3 per cent in 2015, despite the mining construction boom now having peaked three-and-a-half years ago.

The most interesting trends to watch could be within the new apartments sector, the extent to which new and off-the-plan units experience price declines and settlement defaults, and perhaps most interestingly of all whether Chinese mainland buyers elect to bring their newly built properties to the rental market or leave them empty.

We've never seen a cycle like this one with FIRB approvals for foreign buyers having tripled in two years, so as such some trends will be unique.
Posted by Pete Wargent at 08:10