A quick browse through the ABS Migration data for financial year 2015 confirms what we already knew: that Melbourne (+6,600) and Brisbane (+3,985) are now the greatest beneficiaries of net internal migration.

Adelaide, on the other hand, lost a painful 3,985 persons to net internal migration in the financial year.

As usual the biggest absolute drain was away from Sydney at a net loss of 15,867, many of whom moved outwards to regional New South Wales.

That said, the harbour city more than compensates by attracting tens of thousands of immigrants per annum from overseas, and Sydney also experienced a net internal gain in 15 to 24 year olds, partly due to the array of education opportunities on offer. 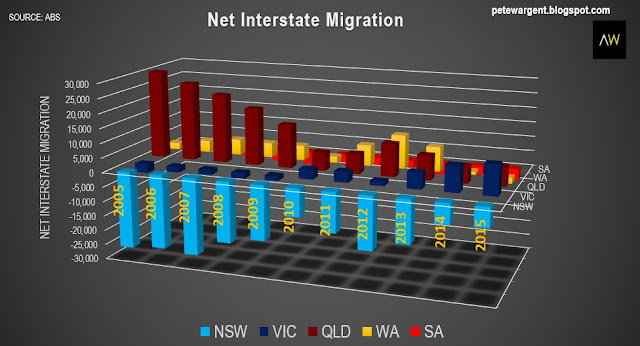 The migration figures confirmed that total net overseas migration of +168,200 was about 10 per cent lower than in the preceding financial year, with total population growth steadying at around 313,000 towards the end of 2015.

The share of the resident population born overseas increased again in the 2015 financial year to 28.2 per cent, which is up from 24.2 per cent a decade earlier and the highest share since the 1800s, being the period following the Eureka Stockade and the Victorian gold rush!

Following the end of the White Australia policy - and particularly since the turn of the century - the percentage has been solidly increasing for a decade and a half now, and if you include those with a foreign born parent, the total percentage rises more sharply still.

With the share of foreign born residents increasing, Australian may soon surpass Switzerland and possibly even New Zealand to be second only to Luxembourg on this measure.

Indeed, the number of Aussie residents born in China has more than doubled over the past decade to 481,400, while Indian-born residents have almost tripled over the same time period to 432,700. 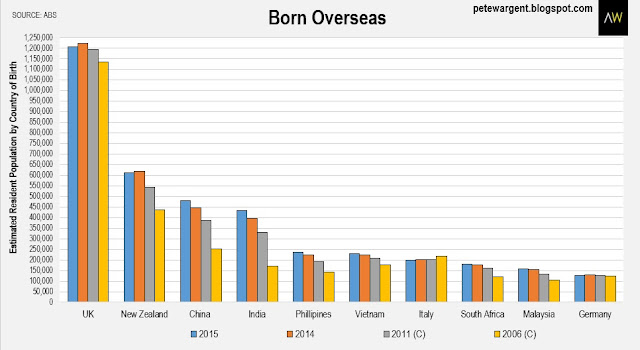 Moving forward the share of Asian-born residents is set to increase, partly at the expense of their European-born counterparts.

Notably, unlike migrants from say, Italy, the median age migrants from countries such as India has declined from 37 years to 33.4 years over the past decade.

If housing market trends are of interest to you, it may be profitable for you to follow the flow of Asian capital.
Posted by Pete Wargent at 17:50